Meanwhile, back at Bound Jocks, it’s Spencer Reed’s turn to tie up Morgan Black. Now that he’s free, Spencer takes matters into his own hands and makes Morgan submit to him. With one leg up on the box, he ties Morgan’s arm to his leg so Morgan is unable to move and his ass is very exposed. Hey guys, this is important, listen up!  We’re going to go for some sort of handcuff world record. That’s right fuckers, I want one Metalbond reader to get in the Guinness Book. I am totally fucking serious about this.

This endeavor was inspired by longtime Metalbond reader and contributor Chuck: … and it is being instigated by none other than Mikeintightpants.

Well done Chuck, that’s a great pic and it undoubtedly gave you a “hard” time when that lot was locked on – I’ve counted 20 pairs.

No, there’s nothing in the Guinness book of records to show the most handcuffs worn at one time, the nearest they get to it is to record the largest handcuff collection, but the collection that’s featured is no longer in existence as it’s had to be sold as the owner got into trouble and no doubt found himself wearing cuffs involuntarily, together with a spell in prison.

However, the UK publication “The Book of Alternative Records” deals with a number of records set for the most people handcuffed together – not quite what was meant by the question posed but it’s still an interesting theme.

In January 2007, 305 Metropolitan police officers and Special Constables were handcuffed together (with their own cuffs, of course) in London. In May 2009, 430 police recruits locked themselves together in Scotland and their record was beaten in February 2010 when 562 Mounties were locked together in Saskatchewan, Canada. All the above events were organized for the benefit of various charities.

Following a recent meeting with a couple of my cuff buddies (and with the approval of Metal) it’s my intention to claim (informally on this site) a new world record for a handcuffing experience — don’t worry Chuck, I’m not planning to challenge your record (yet!), mine is something a bit different.

Hopefully Metal will agree to post my claim as a separate current thread on the new site?

You got it. Mikeintightpants! Let’s see what you got buddy!

Meanwhile, I want every reader to start brainstorming ideas NOW on how at least one of us can get into the Guinness book for some sort of handcuffs record.

This is a serious challenge, and it is an order!

Get to it, prisoners!

You can email me by clicking the tab from the About page. I learned with great sadness recently of the passing of Dirk Praga. Unfortunately I do not have pictures that do Dirk justice, but trust me, Dirk was one of HOTTEST men in Second Life. He was also one of the nicest. Even better, he was SERIOUS about metal bondage. He sure knew how to make the locks inescapable, the predicaments challenging, and the dungeon accommodations secure and uncompromising. He was always willing to teach a “noob” the ropes, and he was generous by sharing his living accommodations and his prison facilities. He also protected many others. That’s right, despite his quite intimidating looks — often in full leather and mirrored sunglasses — he was also incredibly friendly. He is greatly missed by his many friends, including Rio Naidoo, Gimpsub Crazyboi, Steel Vlodovic — and many, many more.

Second Life will never be the same, nor nearly as exciting, without Dirk Praga.

Dirk, I salute you.

You are greatly missed. You can find works like this at the website of radical sex photographer Mark I Chester. That’s Mark I Chester with an I. There’s a link to him on the links page. 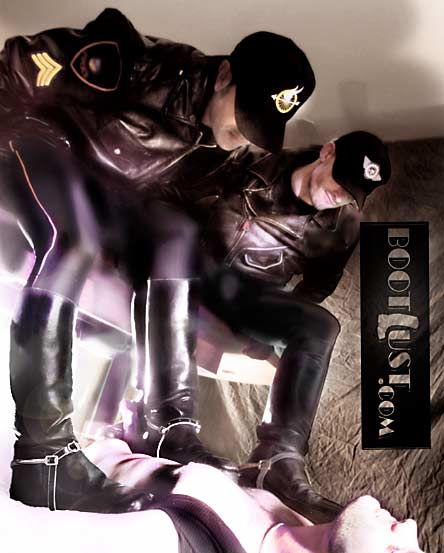