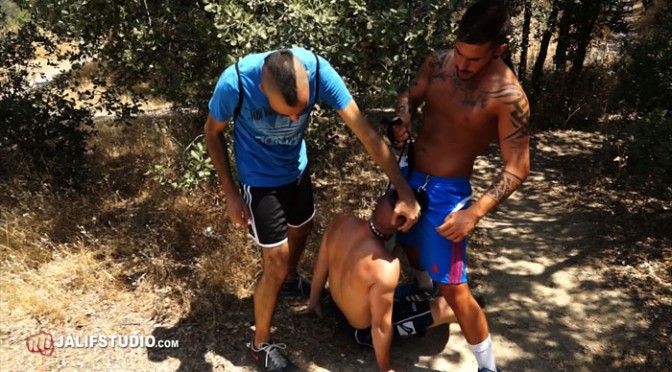 At Jalif Studio, Aday decides to take his pal Punkcher to the countryside to train his new pet Ruben Mastin. Smelling sneakers and feet, swallowing spit, drinking and being hunted like an animal are just some things awaiting for him in the woods.

See more of this shoot at Jalif Studio.

Here are more pictures from this shoot: Jim awoke to blackness. Although his eyes were open, he could see nothing. As he blinked he could feel something soft over his eyes and he realised he must be blindfolded. He tried to raise his hands from his sides to remove the blindfold and found he couldn’t move them – they seemed to be strapped to the harness at waist level. As his mind cleared he realised that his mouth was open, and filled with some kind of gag. As he explored it with his tongue he could feel it was long, thick, filling his mouth and had a hole at the end through which he could breathe. Jim tried to raise his head and found he couldn’t – it was strapped down.

He tried to analyse his situation. From what he could feel he was still wearing the harness, collar, wrist and bicep straps. Something else was covering his body, something thick and heavy that was making him sweat. He could flex and move slightly, but in places something thicker and heavier was holding him down – at ankles, knees, thighs, waist, chest, neck and forehead.