Bound stud Brock Avery has a deprivation hood on his head with an ashtray gag shoved in his mouth as Jessie Colter walks him down the street. They stop by a group of guys smoking outside and encourage them to make use of Brock and his gag. After tearing away the bound stud’s clothes, the guys drag him inside a local shop and shove his face into a box of pizza. When the guys realize they only have cheese pizza, they give Brock a nice 9-inch sausage to go with it as he’s made to swallow his cock pizza. Clover clamps are painfully clamped all over his torso and balls as the guys pass him around and fuck him up against the window. An electric butt plug is shoved up Brock’s ass, shocking his prostate as he’s made to swallow cock after cock. As the plug is pushed to the max, the public slut flails on the ground like a fish out of water before he’s held down in a pile of clothes. After the guys take turns ramming their cocks up Brock’s ass, they give him a face full of cum and make him lick up every drop. 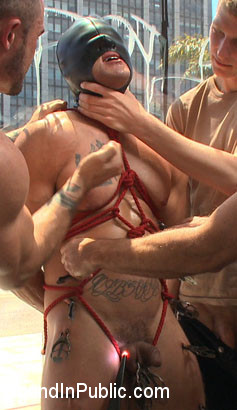