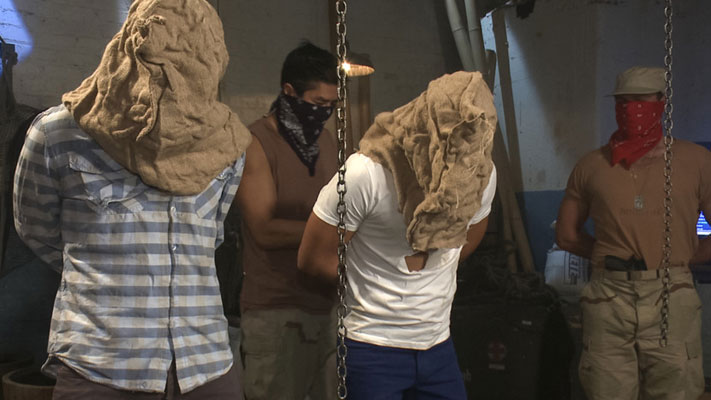 Sebastian Keys and Leo Forte are accused of being spies and punished during a vintage live shoot at Bound Gods: During a Bound Gods Live show, they did something they’ve never done before. In this three-hour, role-playing event, they featured Leo Forte and Sebastian Keys as the subs for Dom Morgan Black. The state of Kinkistan has apprehended two hikers claiming to be models from the neighboring country of Moldavia. They are charged with espionage, and their interrogation is broadcast live on the internet for the citizens to decide their fate. Under the supervision of Cmdr. Morgan, the prisoners are given a thorough cavity search. Still pleading innocent, the interrogation is amped up as the two spies are made to suck cock. Still claiming to be hikers, the captives’ fate lies in the audience decision. The verdict: guilty. The two are tied up to bamboo and fucked by the Commander while suspended in midair. Resigned to the fact that they are now sex slaves for the country of Kinkistan, they beg for Cmdr. Morgan’s load, then blow their own loads on the Commander’s foot and lick it clean. Video of this shoot here

One thought on “POW role-playing”