Don’t let anyone tell you that life as a slave trader is easy. As with any other business there are challenges and I discovered one of many, very early in my slave trading career.

My clients, as I’ve said, spend a great deal of money with me and expect perfection. Unfortunately, “perfection” is often in the eyes of the beholder and although I always do my best to interpret my client’s briefs, it’s a sad fact that many of the slaves we procure just don’t appeal to the customers. Think about it this way, you can have a pair of twins standing in front of you and, although they are near enough identical, one will always appeal to you more than the other. Every new intake requires client approval before training begins. This way we don’t waste money on training if the client rejects them.

Marco is one such reject. The client ordered an Italian (with accent), early twenties, gym bunny, low BMI, cocky, ladies’ man, the type to play soccer with the lads on the weekend and bang his girlfriend at least twice a day. The cock was specified to be thick and at least 10 inches long when hard. The testes had to be tough and low hanging as the client enjoys ball busting.

Marco fitted the bill perfectly, was an exact match for the spec, but the client was not quite happy with the face. Personally, I love it. It has a half inch scar-line over its left eye and the eyebrows are set high near the nose and low on the temples giving an expression of vulnerability. This stunning example worked in the construction industry until snatched from a road-work team after knocking-off work one evening.

In the early stages of building the business, rejects like Marco resulted in excess stock of unwanted meat which, to be frank, was a massive drain on expenses. The solution tuned out to be remarkably simple. I developed a second revenue stream for the business, separate from the sex-slave market.

Marco carefully opens his right eye, expecting to be blinded by the morning sun streaming through his girlfriend’s bedroom window. Instead, there is just blackness. Then he remembered, he couldn’t possibly be in her bedroom. The bitch had refused him sex last night as there’d been a massive argument. All because she’d discovered he’d fucked her sister when they were all on holiday together last summer. He couldn’t see what the problem was, it wasn’t as if he’d done it more than half-a-dozen times.

He closes his eye, deciding it too early to wake up.

Something doesn’t feel right, he’s not lying comfortably. He tries to turn over and realises he can’t move. Huh? What the hell? He tries to reach for the bedside lamp but his arms won’t move. In fact, his hands aren’t in contact with his bedsheet, pillow or anything else.

As Marco raises into consciousness and shakes off the fug of his long sleep, he realises he’s not in bed at all. His arms seem to be drawn behind him and are completely immobile. They are, he will soon realise, hooked over a padded horizontal bar that runs left to right under his elbows so his upper arms are perpendicular to his back, his elbows are strapped to the bar and his hands just hang uselessly behind him. “What the fuck’s going on? Where am I?” he thinks.

Nothing moves. His arms are pinned, he can’t quite work out where his legs are either, but they also won’t budge. His head won’t move up or down, or side to side. Has he been in an accident? Is his whole body in plaster-cast?

As Marco tries to understand what position his body is in, he realises his mouth feels odd. He recalls last summer when he and his bitch girlfriend went scuba diving together in Australia on Queensland’s Great Barrier Reef. The sensation in his mouth is exactly like that of having the diving gear mouthpiece lodged between his lips and teeth, not uncomfortable but very noticeable. He tries to open his mouth to spit the invader out, but can’t. His tongue explores the alien interloper to discover the plastic securing lugs behind his teeth, and the central hole through which he’s breathing. These things are designed to be air-light and water-tight. Another realisation… he is breathing through his mouth, and can’t inhale through his nose. It appears to be clamped off.

There’s a dull ache in his arse, as if he’s just taken the biggest shit ever. What he’s actually feeling is the one inch medical grade stainless steel pipe that’s embedded in his rectum.

Suddenly, two small LCD screens, the size of small tablet displays, brighten in front of him, one above the other. The top screen shows a bright, alert face, smiling but at the same time somehow sombre, framed head and shoulders down to nipple level. I offer an amiable “Good evening. Don’t bother trying to speak. You won’t be able to with the mouthpiece in place.” The bottom screen shows the crotch of my jeans from roughly belly button to mid-thigh.

It takes Marco a few seconds to become accustomed to the illumination. Once he does, he can see that he’s reclining in quite a small box, looks like metal and fibreglass construction. His legs are pulled slightly behind him, not uncomfortably, and secured by the ankles to fixings on either side. He’s sitting on some form of modified bicycle seat, his back resting on a padded support. His head restraint forces a narrow field of vision and all he can really see is my face and crotch directly in front of him. He also recognises what seems to be a half inch pipe attached to his mouthpiece, running off to the side so it doesn’t obscure his view of the screens.

“OK – you’re probably wondering what the fuck is going on, so here’s the deal. If you look behind me, you will see a door and a couple of hand dryers off to the side. You’ll grasp, therefore, that I’m in a Gents lavatory. I’m standing in front of one of three urinals. Whenever I, or someone else, stand in front of a urinal, screens will light up in your little box to show you their face and private parts. Look… If I move from the centre to the one on the right…” and I take a sideways step.

The two centre screens black out and two others light up on Marco’s right. He has to move his eyes to see me standing at the right hand urinal because his head is fixed, but it’s not strenuous.

“And if I move to the left one….” Taking two sideway steps “You’ll see me to your left.” I smile triumphantly at the hidden camera in front of me. My expression probably comes off as slightly goofy down in Marco’s box.

“Now you might wonder what all this is for. I’ll show you.” holding up a small bottle of water. I open it, take a sip and pour the remaining contents into the urinal at cock level so it can be seen on the lower screen. Marco watches in horror as he starts to understand what’s about to happen. For a while, Marco waits in anticipation, nothing happening. Then water floods his mouth in one overwhelming deluge. He’s forced to gulp the water down so he can start breathing again.

“I am in the business of marketing and supplying a range of high-tech bio-filtration systems to select organisations throughout the UK. We sell the filtration unit for £8,500 pounds, including installation. That’s the unit in which you’re currently secured. We sell replacement filters for £995 each. You are the filter.”

I drop my face to view my smartphone, so I can see Marco through a small webcam positioned between the two central screens. The light from the screens perfectly illuminate the shocked expression in his eyes, so I know that my dialogue has hit home and he understands he has just entered some sort of horrific nightmare.

“Your screen will show who and when someone pisses into your mouth. Your patrons will know nothing about your plight, of course. You’ll have to carefully judge the time between urination and delivery so you can avoid drowning and keep breathing between loads. The flush mechanism to the urinals has been disconnected. You’ll have enough to cope with without gallons of extra water, as well. Besides, it will intensify the flavour for you.”

I see on my small screen a pure gem of a tear running down Marco’s cheek.

“Now, I’m not a monster and I understand that there may be times when you can’t take any more. After all, that much piss will fill you up and I expect your stomach will resemble that of a pregnant whore carrying twins after a few hours. You’ll notice above the centre screen a FACE icon. When that’s lit, all piss will be funnelled into your waiting mouth. There’s a button under the toes of your right foot. If you press it, the display will change to the ARSE icon and piss will be redirected to the pipe lodged between your cute buns. After five minutes the flow will automatically revert back to filling your mouth. You’ll know when that happens from the status icons. You can only use the divert function once every thirty minutes.

With that, I touched the screen of my smartphone and Marco’s cock instantly springs to attention. I could actually hear the moan come up through the drain of the urinal.

“Ok Marco. It’s now 21:30 and the club opens in thirty minutes. There’s already a queue of customers from the front door, half-way around the block. I’ll leave you to delight in your evening. The club starts to throw everyone out at 3am, so I’ll check back at about 4am after the partygoers leave. Enjoy!”

With Marco trying to comprehend what was just said, I leave him alone for this night. 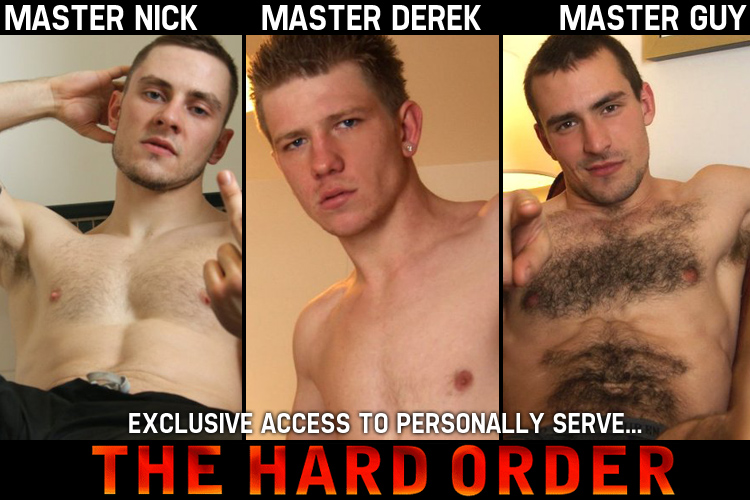 2 thoughts on “Chronicles of a Slave Trader – Chapter 06”