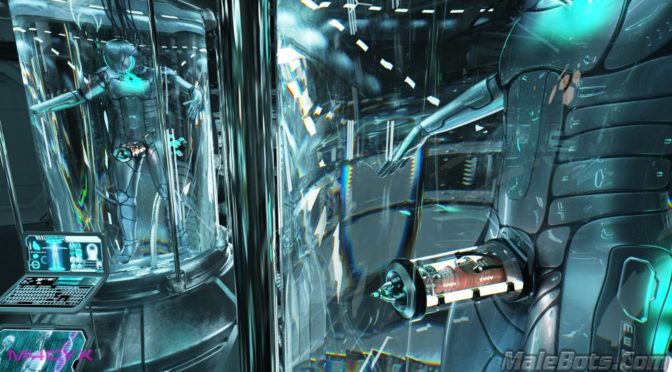 Who would have ever thought these two studly guys would end up like this? Mike and Todd had been friends since they were kids. Mike grew up to become a studly fireman, and Todd became a motor cop. Mike was twice married and divorced with three kids. He was tall, 6-foot-3, with a perfectly chiseled muscle chest and washboard abs, his dark hair cut to a military flat top, with a bushy mustache. Todd was just as good looking, 6-foot-2, with reddish brown hair, pefect pecs and abs with killer biceps. And of course, the standard-issue, perfectly trimmed mustache that every cop on his department had.

As they had done for the past seven years, Mike and Todd hooked up with all their work buddies on vacation at the river. The Colorado River in the middle of the desert during the summer normally reaches 110 to 115 degrees during the day and in the upper 90s at nite. This year, everyone decided that they would plan the trip later in the season. Todd had a great boat. Turned heads and drew a lot of attention. Mike had always wanted some kind of watercraft, but never went thru with buying one. With kids to pay for and two ex-wives, he never could manage it in his budget. On their second day on the river, they met up with their group of friends, almost all cops and firemen.

END_OF_DOCUMENT_TOKEN_TO_BE_REPLACED 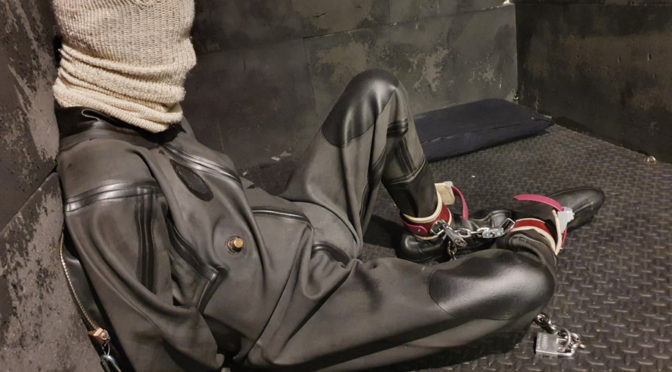 @yohan555 and @xlrugbysocks are both fans of prolonged bondage, and are happy to switch. This summer they set aside time to give each of them a 5-day session of continuous bondage, which was live tweeted on twitter. They were keen to give a debrief to metalbondnyc.

We decided I would have my 5 day session as captive first, to give me the chance to get re-acquainted with @yohan555’s gear and play spaces, even if from the receiving end. We had done a successful 3 day session for each other last year, so we know each other well, our individual turn-ons and no-nos (layers of thick wool, and lots of soccer and seaboot socks being favs for me!) We neither like role-play, but @yohan555 had requested my theme for the session; I said I liked us just to be ourselves, for real, meaning I didn’t have a ‘story’ – and was a bit surprised on my release to find I was outed as an imprisoned and tortured medic!

The time flew by for me; I was a bit sleep-deprived before my arrival, so I slept a lot in the various padded cells and prison cells in the first few days. For me, long bondage sessions are always a mental struggle between letting go/throwing myself into fighting the restriction, and staying calm/keeping some reserves for the trials ahead; on my 4th day, I did reach total capitulation wearing a rubber suit and sj inside the heavy leather suspension bag.

END_OF_DOCUMENT_TOKEN_TO_BE_REPLACED

I walked into the club and wandered over to my usual spot at the bar. Told my favorite bartender Tony I wanted a beer and he acted like he didn’t know who I was.   He poured from the tap and brought the glass and sat it before me on the wooden counter. That was when he finally got a startled look in his eyes and said “That you Rob?” I nodded my head while taking a sip. “Geez, I didn’t recognize you with that half hood on. You going to some costume party?” Funny question from a bartender in a leather bar. Beside the half hood, I was in my usual full leather police uniform with the cod piece on the breeches, my tall Dehner boots, Langlitz jacket and Muir cap. The half hood was the only change of my normal Friday night wear. “Trying something new, that’s all” was my reply. “Changes your whole look……kind of a mystery man. I’m sure you’re going to surprise a lot of people here tonight.” It was a busy Friday night so there were many who would see me wearing it.

Mystery man. Boy did that strike a bell with me. I’ve been coming to this bar for years, and lately have been feeling stiffled. Typecast if you will. I’ve been known around here as a Boot Top for so long that there are times I feel like a tourist attraction. Men approach me all the time with the same fucking question “Sir, May I Lick Your Boots Sir?” Good luck getting any sort of conversation out of them. And good luck chatting up the other Tops who frequent this place. They aren’t unfriendly but I am seen as the competition time and time again.

END_OF_DOCUMENT_TOKEN_TO_BE_REPLACED 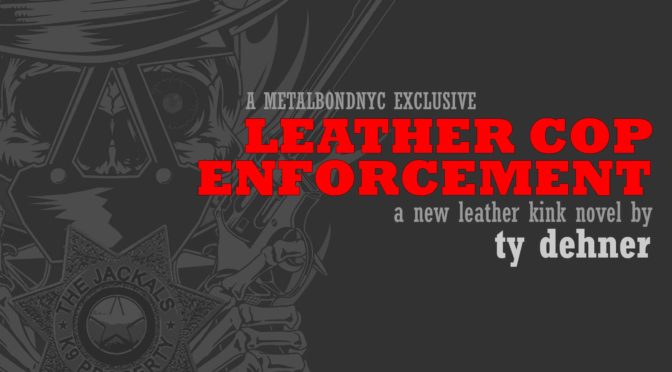 This is an excerpt from ty dehner’s new leather kink novel, coming July 31, 2021, to Amazon Kindle and in print. This excerpt is exclusive to Metalbondnyc.com. Posted here with permission.

The red Dodge Ram finds a parking spot near The Barracks, the Palm Springs area premiere leather bar. There is a light drizzle falling this evening after an afternoon of thunder showers. After parking, Mateo checks that he is prepared to meet the man that has him locked in chastity, looking at his face in his rear view mirror. He smiles as his young skin is clear of any blemishes and he has freshly shaved. His black hair on his head is in a close crop that makes it cool for him when he is on the work site. Opening the door of his truck, Mateo’s boot lands in a puddle as he steps out of his truck.

He had worked hard to shine his Wesco’s just two hours ago. He steps out of the puddle, reaching behind his driver’s seat he pulls out a rag. Placing his boot up on the door rim, he wipes it down and brings back the shine he had worked so hard on. Thinking back upon their first encounter in his trailer, he knew that that KTM rider had to be a leather man. Why else did he have them meet at The Barracks. Being in leather and bondage himself, Mateo didn’t want to overdo his first meeting so he settled for his Wesco Boss boots, black leather motorcycle chaps over his black skinny Levi’s, a black t-shirt with the Mr. S logo on it and his leather vest.

END_OF_DOCUMENT_TOKEN_TO_BE_REPLACED

It was not a good night’s rest; the hog-ties prevented that, but finally they both slept, exhausted from the day’s torments.

It was evidently morning when they were kicked awake by a group of warriors and their rawhide ties removed. There was no sign of Red Feather, but the interpreter was there to explain: “You will be taken out and purged, then taken to the stream for washing and cleansing. You must be prepared for this evening’s ceremony when the chief will fuck each of you in front of our community to show your slave position as his new squaw men. Now to work.”

END_OF_DOCUMENT_TOKEN_TO_BE_REPLACED

“God in heaven, Billy, what have I done to us,” the Lieutenant choked out. “I can feel things crawling all over me, and I’m erecting again.”

“Try to relax, Tom, “ came the grunting reply. “You need to keep your courage up as well as your cock. We have to bear it.”

He got only a sigh of despair and a groan of anguish from the head next to him, as Tom tried to move his body. Bright shuddered in turn; his back felt as though knives were cutting him, as the flies drank his slobber and the drying piss.

The soldiers lost track of time in the hot sun; men and women passed them by; some spat at them, one or two pushed them onto the thorns; the flying insects bit and crawled on their naked bodies. At last the group of Apaches returned, unpegged their ankles, untied their arms and pulled them off the cactus. Spaulding shouted in pain; the sergeant bit hard on the rawhide, as they were raised upright and allowed to stumble back to the chief’s tepee.

There they collapsed, shuddering, on the floor, with dirty fly-speckled chests and matted hair, and bleeding backs and butts. For a few moments, neither spoke as they tried to recover. Bright managed to undo the rawhide tightening in his mouth.

END_OF_DOCUMENT_TOKEN_TO_BE_REPLACED

His arms were tired; he’d been pulled along at the end of a rope behind the pinto horse for several hours, wrists bound with rawhide – chafing despite his heavy yellow deerskin gauntlet gloves. And his feet hurt. He cursed himself for wearing his good cavalry boots and spurs- they made him look great in the saddle, but pinched after an hour or so of stumbling along rocky trails. And his head ached from the bullet graze, which had got him into this mess.

He looked over his left shoulder at his companion. Sergeant Bright seemed to be faring better than his lieutenant was, although he too was bound behind another Apache horse. But Bright was rugged after years in the cavalry, and, at 6’ 2” topped Tom Spaulding by a good three inches. There was a sudden commotion, as the sergeant tripped over a rock on the narrow path and was being dragged along, scraping chest and legs over the uneven ground.. The leader of the Indian band of raiders snapped out an order and Bright was able to scramble to his feet, blood seeping down his arm again.

END_OF_DOCUMENT_TOKEN_TO_BE_REPLACED 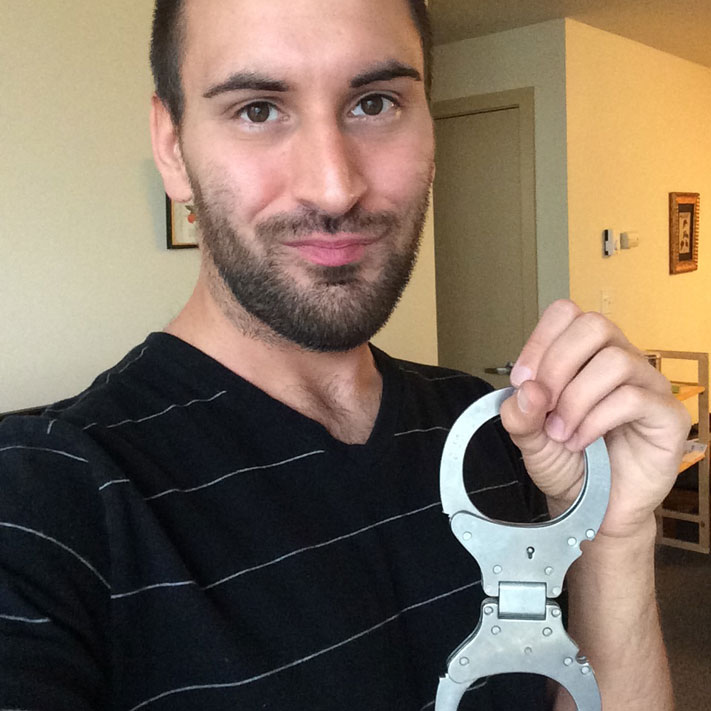 Derek huffed impatiently at the door. He could hear the party continuing outside as if nothing was amiss. His body was suddenly pushed backwards.

Fuck. Derek glared at the ceiling, still trying to avoid reality. Or at least, cherry pick parts of it…

“Ffrrry…” A soft, meek whimper shattered Derek’s denial. He rolled his eyes and tried to give his fellow prisoner a reassuring, forgiving look. Sure, it wasn’t Andy’s fault for losing his balance. But it was his fault for reminding Derek of their situation.

The situation was that Derek, the star quarterback of the college football team, was tied up in a closet, face-to-face with the towel boy! They’d both been stripped of their shirts, hands and feet taped, and were gagged together with a double duty gag. It was a wide leather strap that forced a fake dick into their mouths, made them drool, and the only thing that kept them from kissing was the leather strap that held the peckers.

That wasn’t all though…