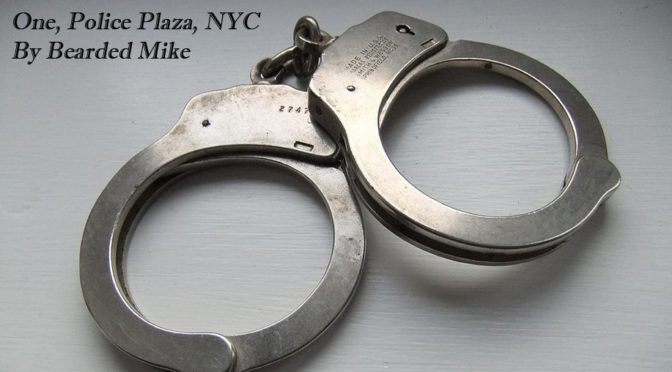 This is a true account of a chance meeting I had a few years back in NYC.

I was on a business trip to New York, and on a morning when I had no commitments I’d been down to Battery Park and was travelling back uptown by bus. It was around lunchtime and the bus was already crowded – people were standing but I was OK and had one of those side-facing seats toward the front of the bus.

I found myself staring at the back-side of a guy who was strap-hanging the same as all the other standing passengers but there was something different about this guy – showing through a back pocket of his jeans I could clearly see the outline of a pair of handcuffs!

My heart was racing, the adrenaline pumping. Was this guy a cop? But he wasn’t in uniform. Was he a collector of cuffs like myself? Or was there some other reason why he was carrying cuffs? I had no way of knowing.

But suddenly I did have a possible way of knowing. Unexpectedly the bus lurched and the standing passengers were jolted to such an extent that “my” guy stepped backward – right onto my foot. He half turned, looked down at me and muttered an apology. I assured him that I was perfectly OK and he went back to his strap-hanging – and I went back to staring at his cuffs. I was fantasising about trying to strike up some sort of conversation with the guy; a perfect opportunity had presented itself when he stepped on my foot, but I’d bottled out and hadn’t had the guts to get into conversation

END_OF_DOCUMENT_TOKEN_TO_BE_REPLACED

Cody had been playing with his Sir for two years now. They started out doing 2-3 hour sessions, which moved to full days, and then Cody began spending nights, often sleeping in restraints. Things became more intense and Cody found himself submitting to Sir more and more when they were together.

The past two years had been great for both of them and the 26-year old Cody had learned a lot, but Sir decided it was time for the boy to experience something much more intense. It was time for Cody to go the campground.

Sir explained the campground to Cody. A few years ago, two good friends of his who owned a leather business bought an old boy scout camp that had sat empty for years. They used it for play parties and an annual weeklong training session to which close friends could bring special boys who were ready — and worthy — of being taken to the next level. Sir thought it was time for Cody to be taken to the campground; he thought Cody was ready, and he thought it would help submerge the boy more deeply into the headspace of a sub.

Cody was excited by the idea. Sir had taken him to the leather store several times and one of the owners had a calm and commanding presence that Cody found exciting. The man was older than Sir – about 60, maybe 65 – but he had a confidence around young subs that came from many years as a Leatherman.

END_OF_DOCUMENT_TOKEN_TO_BE_REPLACED

There’s a brand new video today at Men In Chains: ‘The Bondage Projects – Part One’ 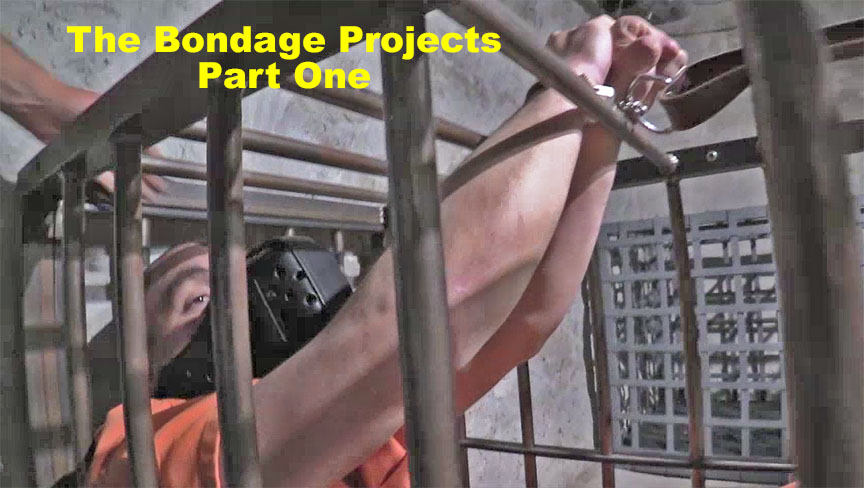 Zac crashed for the next few hours with good reason. After spending the night locked up in a set of transport shackles and then spending some time chained up to the basement post, he was beat. It was noon before he hit the shower and headed out to run a few errands for the day. It was a scorcher that afternoon so he opted for his cargo shorts, his favorite snug fitting navy Under Armour Just Saying sleeveless tank and his worn low Chucks. It was almost dinner before he got back and he noticed Nick and Daniel kicking around a soccer ball in the front yard, their shirtless physiques glistening with sweat in the late afternoon sun. Zac was pretty cut himself, but he admired Nick’s physique, the muscular trimmed hairy chest that looked bullet proof. With his two bags of new workout clothes in tow, he headed over to chat with the men and soon found himself engaged in the battle of the soccer ball.

By the time it was over, it was a sweaty mess of three muscular hunks.

END_OF_DOCUMENT_TOKEN_TO_BE_REPLACED

And fist mitts too! 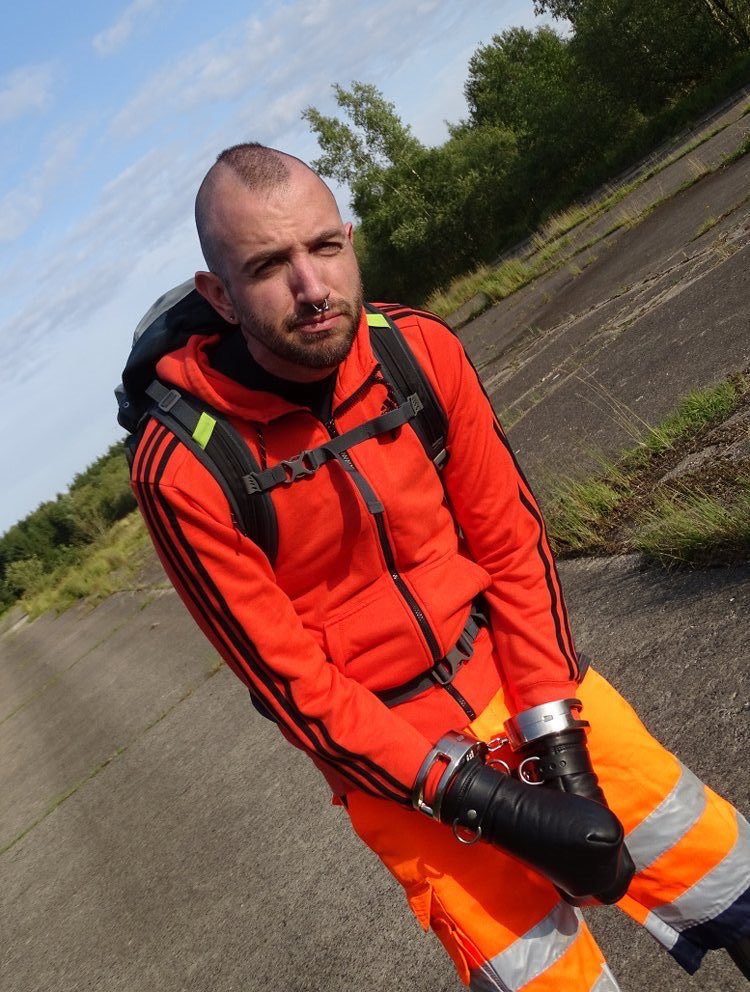 The two sets of cuffs were sitting on the deck furniture end table during the burger and beer fest, and Zac couldn’t help but sneak peeks at them whenever he thought nobody was looking. As a kid, Zac loved cop shows and seeing guys getting arrested and as his early high school years came about, he noticed that those shows and images created a stir in his manhood. Always wanting to get his hands on a set of cuffs and locking up a guy and even experience getting locked up had only been thoughts with no real world experiences. That is, until today, and he got a full dose — all in a short period of time.

The ice chest was right next to the end table, and after grabbing and cracking open another bottle, Zac couldn’t help picking up the Peerless cuffs so he could again check them out. Ratcheting the bars through the locking bar, and listening to that solid, rapid, click-click-click, created that stir again.

END_OF_DOCUMENT_TOKEN_TO_BE_REPLACED 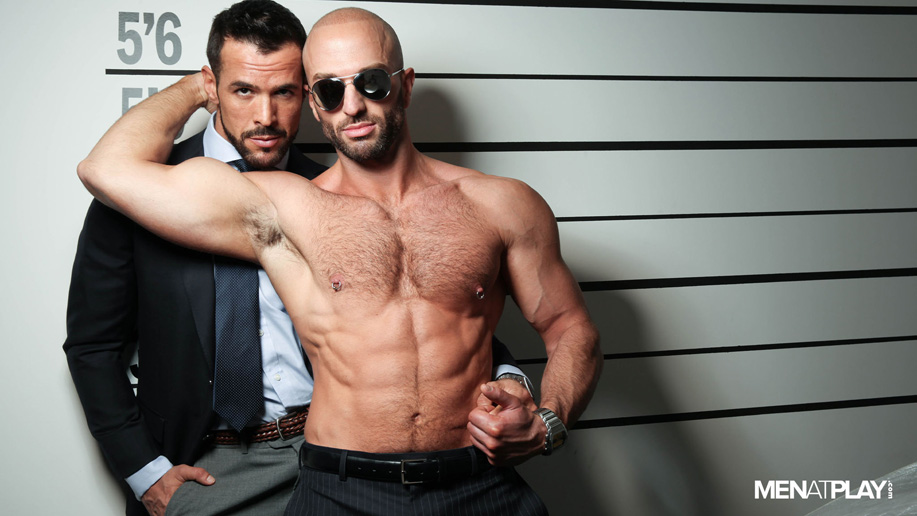 Bruno Boni is not in the mood for putting up with any bullshit, especially if you’re a hot-shot businessman. So when Denis Vega is arrested, Bruno shows him no pity and handcuffs him to a chair ready to show him who’s in charge now. 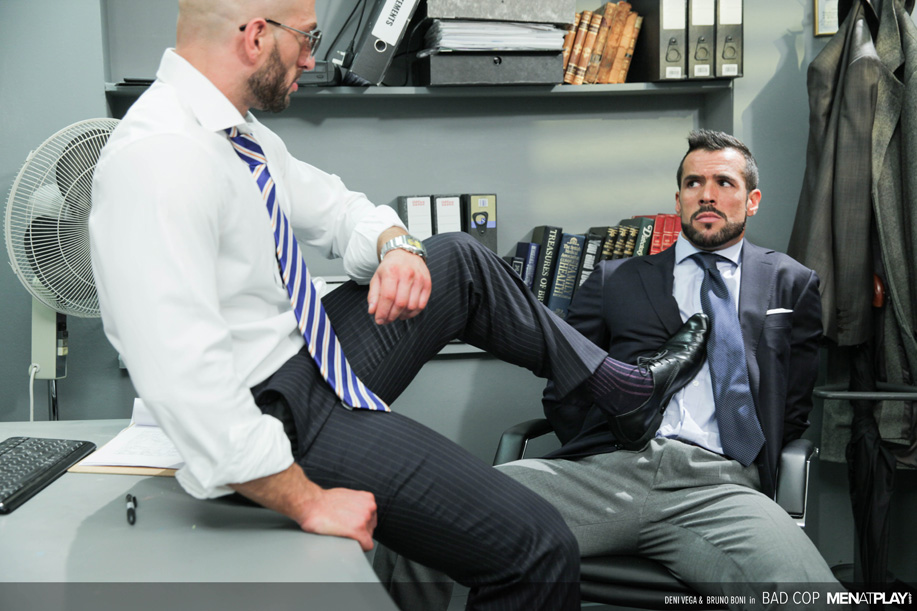 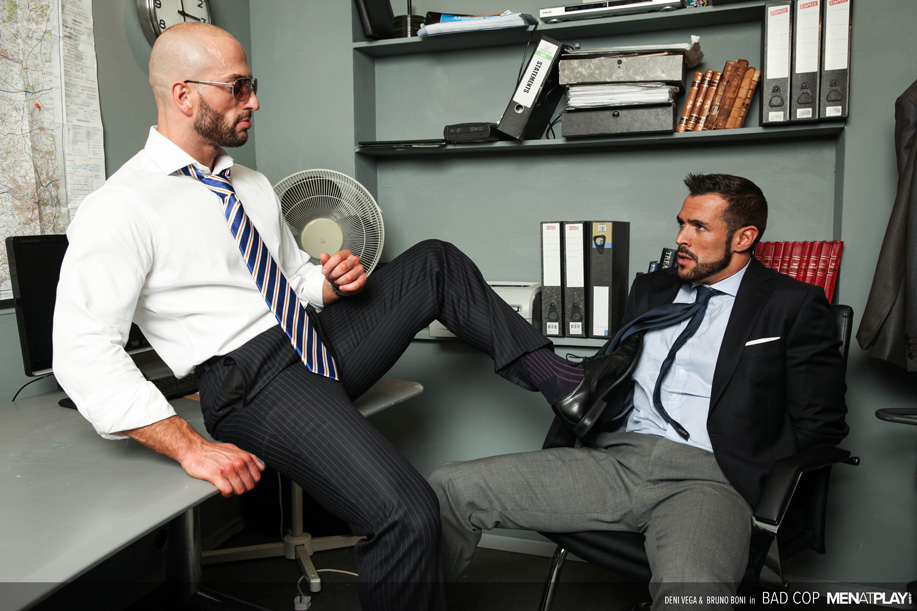 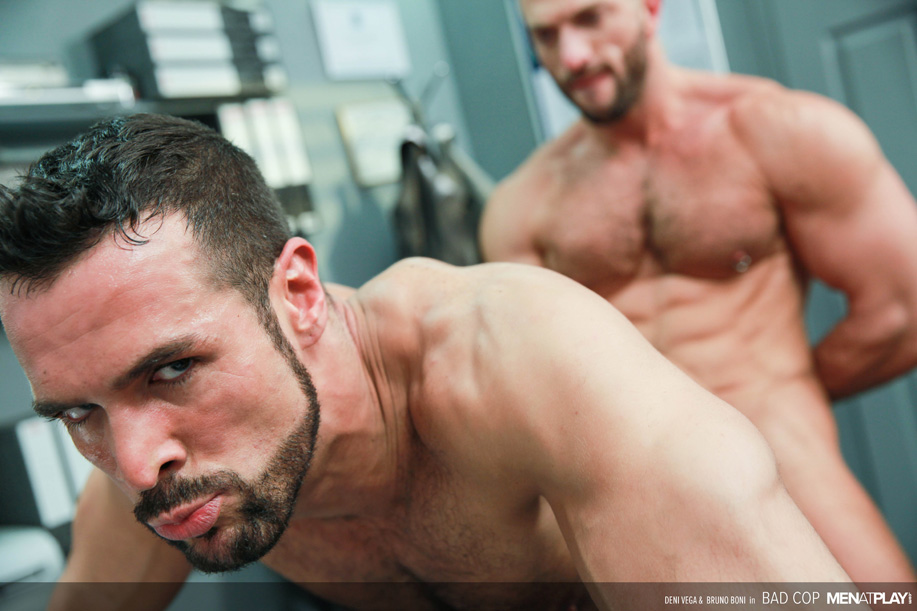 Denis turns out not to be as cooperative as he‘d expected, so Bruno resorts to forceful action in order to get him exactly where he wants. And, that’s on his knees begging for his leniency with Bruno‘s meaty, uncut cock deep down his throat.

Bruno gets his way with Denis‘ ass bent over his desk, and ready for a seriously hard pounding by the hard-handed investigator.

See the video at Men At Play 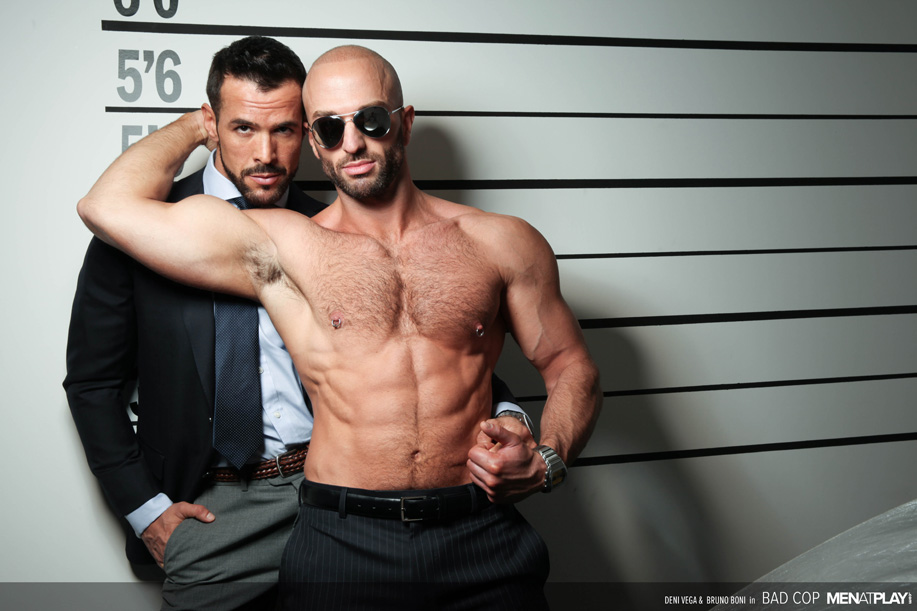 Here are some darby-style cuffs, which are among my favorites: 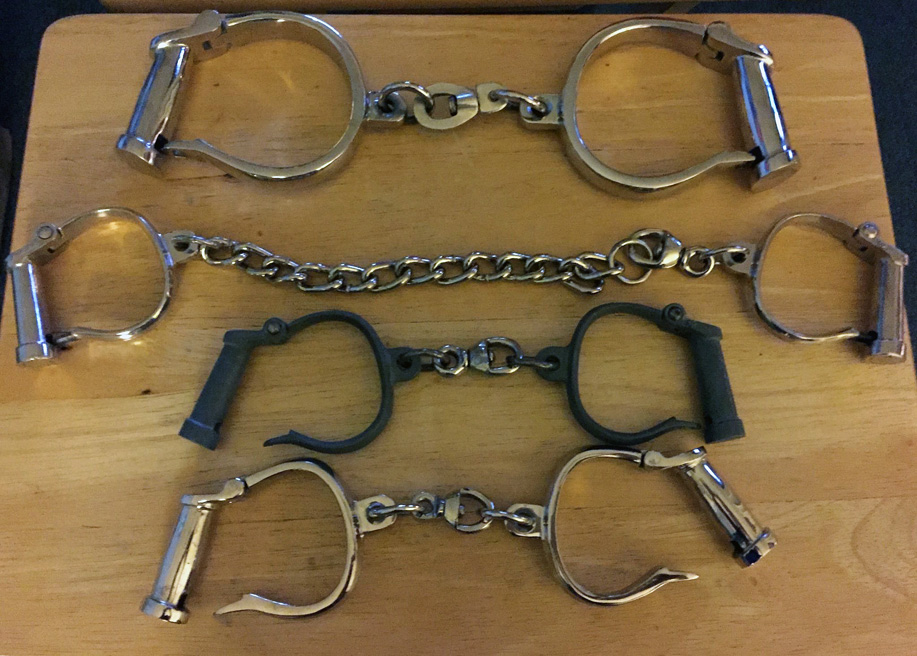 From the top are darbies for ankles customized with shortened chain, and wrist cuffs in chrome with long chain, and short chains in gunmetal gray and another pair in chrome.