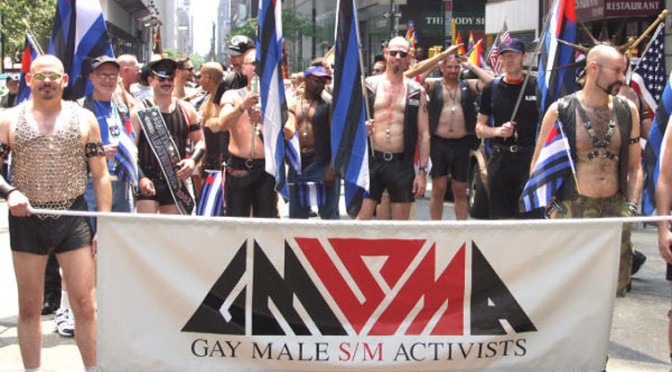 What’s happening is that after decades of being a vibrant, thriving organization of gay men interested in learning about safe, sane and consensual s/m, GMSMA is now “transitioning” into a non-profit foundation. There will be no more Wednesday night programs. During its heyday, GMSMA had hundreds of members from not only New York City but from across the country and even from overseas. Regular meetings were held twice a month, and it was not uncommon for the third floor meeting room of the gay community center on West 13th Street to be jam packed with dozens or even 100 or more men eager to learn and to socialize. One night the topic might be how to tie up your boyfriend in really good rope bondage, another time you could learn all about flogging and whipping, or how to put together a really kick-ass cop or firefighter uniform. There were even some edgier programs like dog training, piss play or force feeding, or fun ones like an s/m game show. Regular “Dungeon Demo” nights were held at local play spaces, where interested men could come and observe hot scenes. Educational workshops and seminars were also held — events like the “School for Lower Education” and “Special Interest Groups” where smaller groups of men could explore and expand their sexual interests in more intimate settings. And closest to my heart, an award-winning print newsletter — NewsLink — was published several times a year. I was privileged to have served as editor of NewsLink for five years.

GMSMA was also an activist organization. Its leaders were instrumental in securing a place at the table for the leather community in groundbreaking gay civil rights marches in our nation’s capital. It was also the first s/m organization to include “S/M” in its title. That may not sound like much of a big deal today, but when GMSMA was founded back in 1981 those who engaged in s/m activities were often looked upon as freaks or deviants — even by those in the larger gay community. Believe it or not, GMSMA had to fight to be allowed to meet at the gay community center. In later years it became one of the center’s biggest financial donor organizations.

There were about 45 men in attendance at the last meeting this week, including a leather top who brought a very sexy and shirtless tattooed slave on a leash, who greeted the men he was introduced to by getting down on his hands and knees and licking their boots. Most who showed up were old-timers — one came in on the train from northeastern Connecticut. A few who came were newer members. At least half — including me — were former board members of the organization who had put in years or in some cases even decades of service to the community. But when the official business of the meeting got under way and the remaining officers announced the sad plans to effectively shut down the organization, only one man in attendance raised an objection.

It was painful for many others as well, but the unfortunate fact, what everybody knew — and what ultimately led to the end for GMSMA — is that there are simply not enough men who are willing and able to step forward to lead the organization anymore. The current board was down to just three members (a fourth signed on to help in the coming months with the transition). They were over-worked and under-appreciated. The harsh reality is that the organization simply could not continue to exist in its current form without more manpower.

But it’s not all bad news. What remains of GMSMA is Folsom Street East, the annual leather fetish block party, which will continue to grow and thrive. The annual Leather Pride Night, which was originally founded by GMSMA but later turned over to the greater leather community, continues as a popular and very fun annual event, and a sexy leather fashion show is off to a good start as an annual event. Meanwhile, GMSMA’s archivist is sending all of the organization’s historical records, photographs, publications, fliers and memorabilia to the Leather Archives and Museum in Chicago, so that in the future anyone who wants to can explore. Who knows, maybe someday a documentary filmmaker will take interest? To say that I was cranky was an understatement. I got home from work and hurled my wallet and keys at the wall. Not caring if they hit something, in fact I was really feeling like hitting something, or rather someone! Jake was meant to have called me a week ago, and there was no word from him still. I wiggled the mouse on my comp to wake it up and looked through a few online pages, both gay and social networks. No action on any of his profiles.