Back at the House, the atmosphere seemed to be changing.

Everybody noticed it  — things were different. Cicero was snapping at everyone, at least everyone whose existence he noticed. Sacky complained about “these constant ALTERATIONS in my menus” that were made by Mr. Hamilton and Mr. Thomasen. Marky complained about being rousted “in the middle of the night” — meaning his jerk-off time after dinner and Sacky’s kitchen wine — and having to drive Mr. H and Mr. T to the Parrot Lounge and wait in the car till they “came out with something or other,” a something that spent the night in their bed and was returned to obscurity the next morning, “after stinkin up my car.” Then it all stopped, as suddenly as it started. The Misters decided to try something else.

Late one afternoon, right before dinner, a new workie arrived in the back of a truck and was hauled out of its cage and led to the barracks. Its name was Jody, and it was a very cute young man, or had been before it got put in a workie suit. Clearly, it had done service in some other venue besides Hamilton Farms: there was fuzz on its head, and it still had eyebrows. But it had big brown eyes and a nice slender body. This was no field hand. Wherever it had been, it had been given easy treatment. To its body, anyway. The brain might be different. Its eyes were scared — very scared. Which is normal, when you’ve just been shipped somewhere in a cage. Cicero stood in the door of the barracks and told Nob to “take off its hair and move it up to the House. That’s where it’s gonna live.”

END_OF_DOCUMENT_TOKEN_TO_BE_REPLACED

So that’s the way it was, as — what do they say? — the days stretched into weeks and the weeks stretched into months. If this was a movie, there would be a calendar with the pages flipping past. No reason to stop at any of them. Every day was the same, except for Sundays.

They don’t make you work on Sunday. Somebody said “it’s because Old Man Williams needs a day off,” which made everybody laugh because nobody could figure out what he did on the other days of the week. Him and the jeans dudes. Who turned out to have names. “Ethan is the one that locks us up at night,” I was told, “and Chad is the one that lets us out in the morning.” There were a lot of jokes about whether Chad and Ethan were always packing guns because they never had anything else to shoot with. But everybody knew that they wouldn’t think twice about shooting one of us.

That first Sunday I just laid on my bunk, listening to my body trying to recover from every kind of pain, in every member except one, which I hadn’t used in so long that I couldn’t remember it. But the overwhelming pain was knowing that I was a workie. On the other Sundays I was given more education about what that meant.

END_OF_DOCUMENT_TOKEN_TO_BE_REPLACED

While I was thinking about all the things that could mean for my future (!!!), the dudes in jeans were putting me on the truck. I’m saying “on the truck” instead of “in the truck” because my place was in a cage attached to the bed. I would ride to the farm like an animal. No, not “like.”

The two five-gallon tubs of Slick It Off were nestling beside the cage. One of the dudes told me to stow my box behind them, and he unclipped the leash from my collar and handed it to the cop. I could see a lot of leashes hanging in the truck’s rear window; I guess they didn’t need any more. And was that a rifle sticking up between the seats? That or a shotgun! They’d be ready for me, in case I caused any trouble during my transport.

They opened the little gate to the cage, and I clambered in. You could tell that the cage wasn’t just a temporary part of the truck; it was bolted to the bed. There wasn’t enough room to stand up in, but there were little shelves on each side of it where somebody could sit. Just enough for four workies to be crammed inside. But today only one workie was out for delivery — me. I had the whole cage to myself.

END_OF_DOCUMENT_TOKEN_TO_BE_REPLACED

Needless to say, I was exhausted. I was glad that the next thing they did was to lock us back in our boxes and feed us another workie bar. I gobbled the awful thing down and fell asleep on my awful, horrible bunk.

But just because I was calling it a day didn’t mean that Boss Drum was. I don’t know when, because without any clocks or cell phones to look at I was losing track of time, but at some moment that was way too soon there was a bang on the door and a key turning in the lock, and I had to STEP OUT and LINE UP and STAND AT ATTENTION while Boss Drum introduced us to yet another workie who was appointed to order us around. This one was a young black guy, very precise in the way he talked, and he was there to “start you workies off on your on-the-job training for your future positions in life.” The name on his shirt was Grig, and our first on-the-job training was washing floors. “And I’m gonna go ahead right now and tell you about how to do that.”

END_OF_DOCUMENT_TOKEN_TO_BE_REPLACED

On the other side of the door there was very short hallway, with another door at the end. The first door was wood, but the next door was steel, and it had a lot of steel crossbars and rivets embedded in it. One of the WORC cops inserted a key and slowly swung the door open. Whoa! The thing must have been six inches thick! What the fuck! I saw a wide hallway leading back into the building. The floor was concrete, the walls were concrete, the ceiling was steel. Ugly? You bet.

There was a bunch of guys sitting on a bench in the hallway with their arms cuffed behind them. What do you think–maybe we were all there for the same purpose? More future workies!

“Sit,” one of the cops told me, and I dropped down next to the other guys. You probably never had to sit on a steel bench with your hands cuffed behind your back, so I’ll tell you–it isn’t easy. “And keep quiet,” the cop said. Then the two cops went on down the hallway and disappeared.

END_OF_DOCUMENT_TOKEN_TO_BE_REPLACED 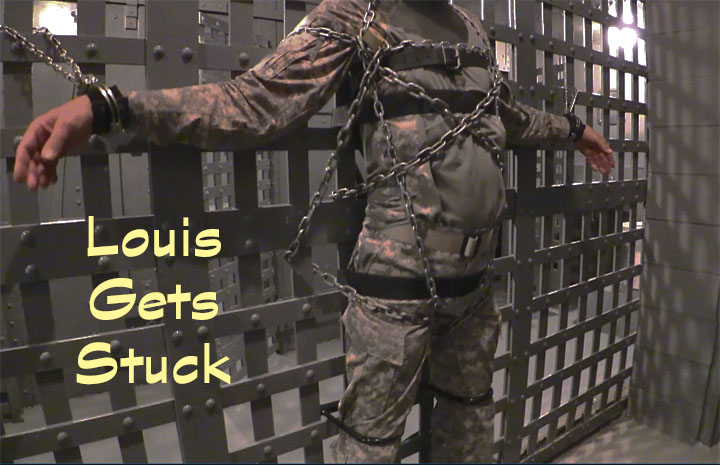 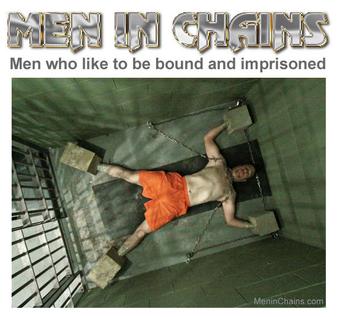 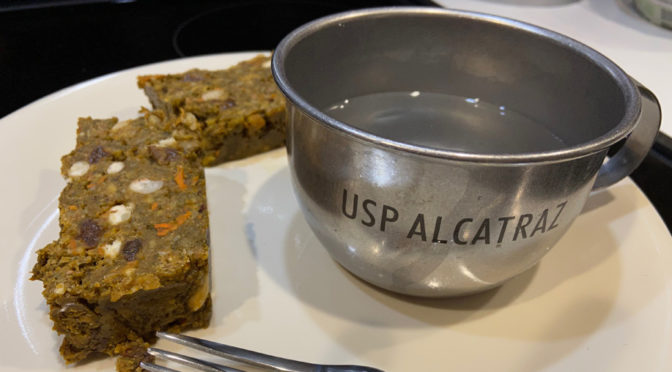 I baked prison loaf! Which is also known as nutraloaf or special management meal. It’s what is fed to incarcerated prisoners as punishment, but its use is controversial and has been challenged in court. There are various recipes, some with meat and others without. I used a recipe I found online, without meat. I used real cheese because I could not find imitation, and I substituted olive oil for vegetable oil. The recipe yielded two loaves, but I only ate one slice. It was not as horrible as you might think, however I did not want to have more than the one slice. I guess I might have felt differently about the food had I been locked in a jail cell for a couple days with nothing to eat. 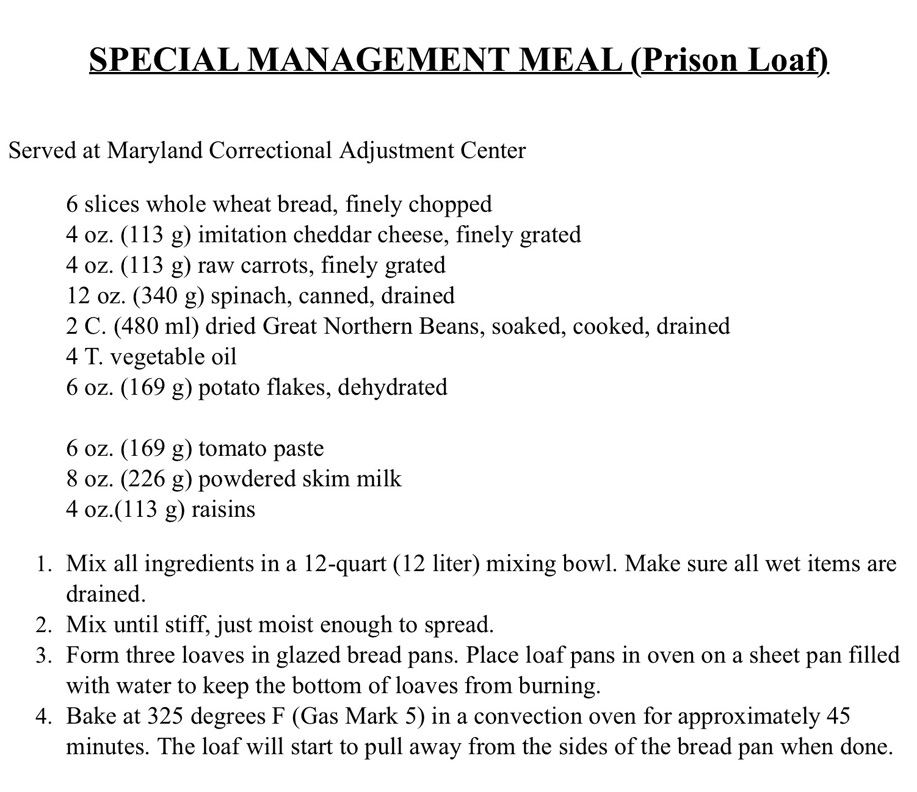 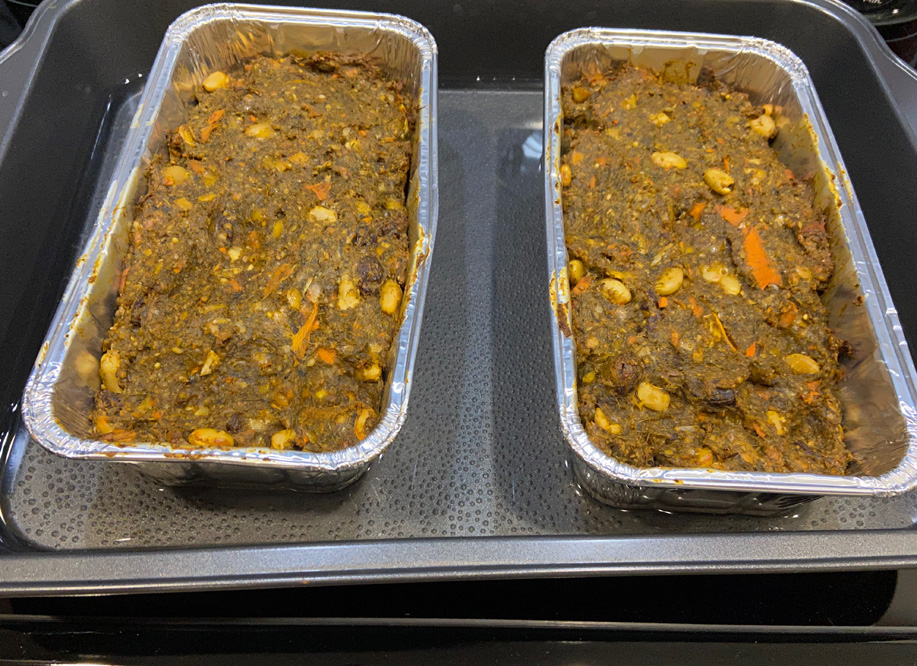 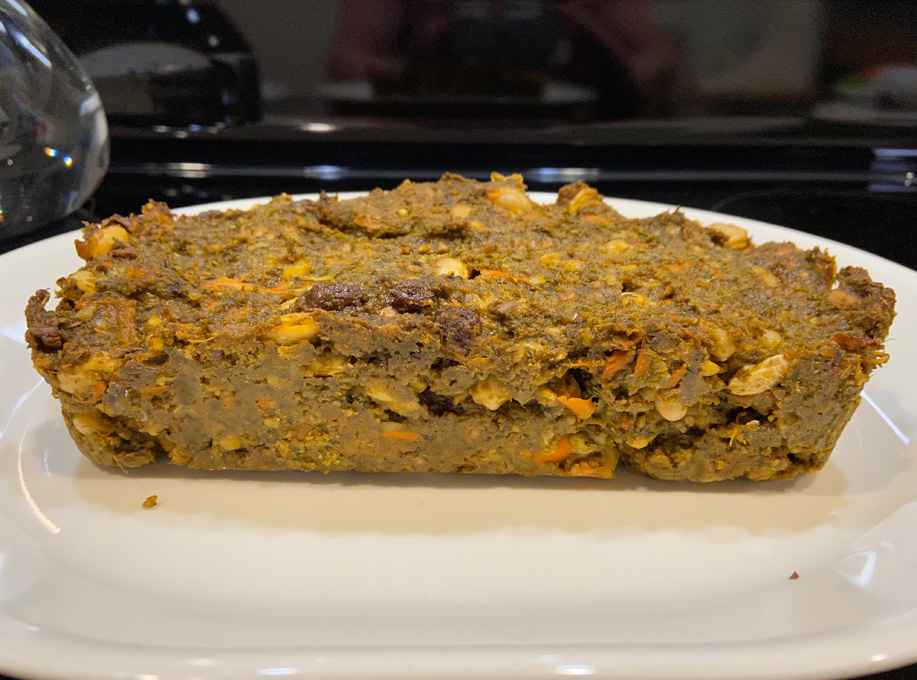 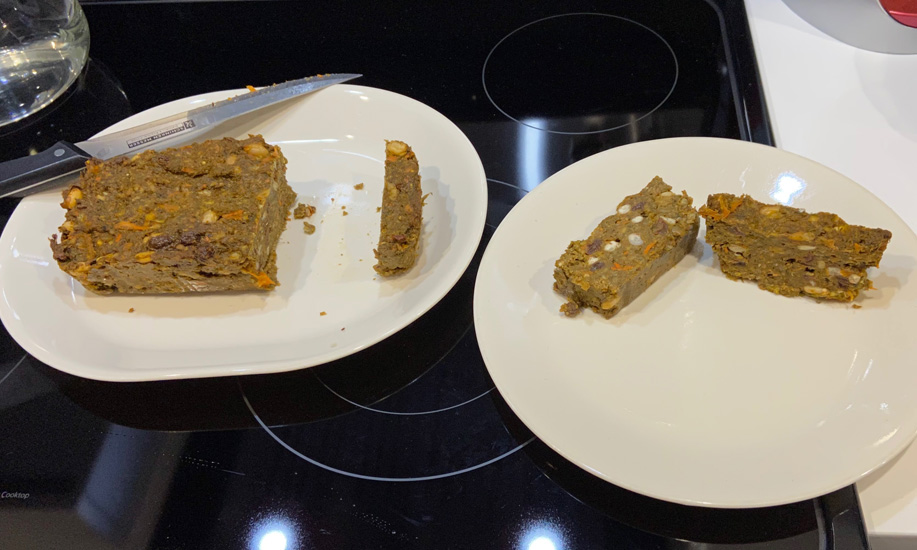 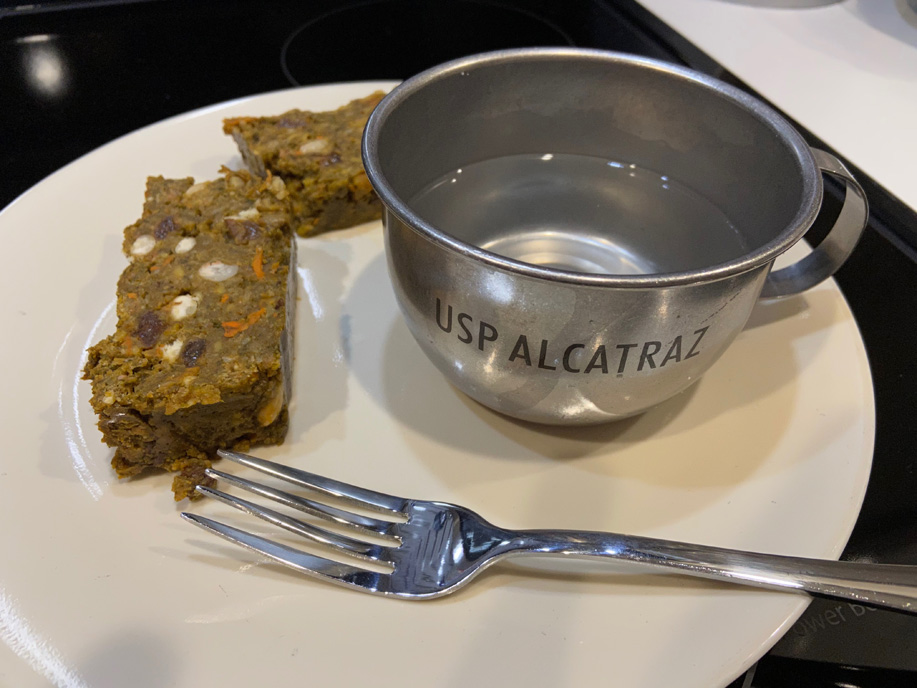 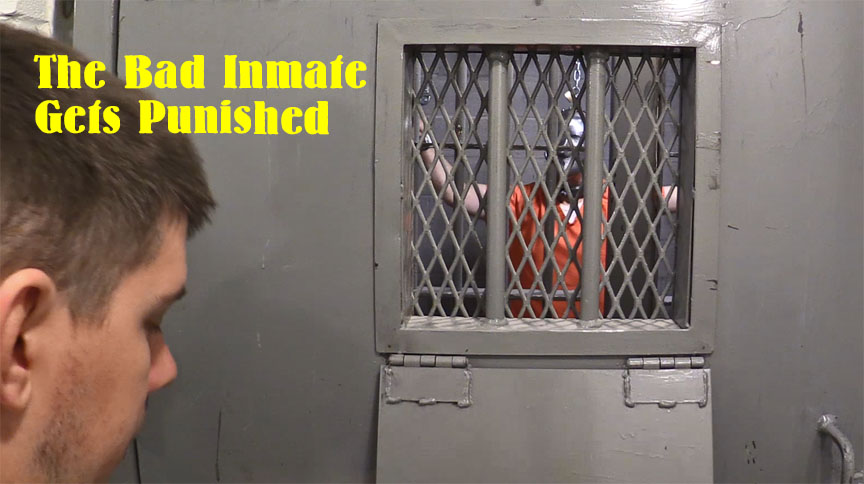 Check out scenes from this newly added video — “The Bad Inmate Gets Punished” — at Men in Chains: 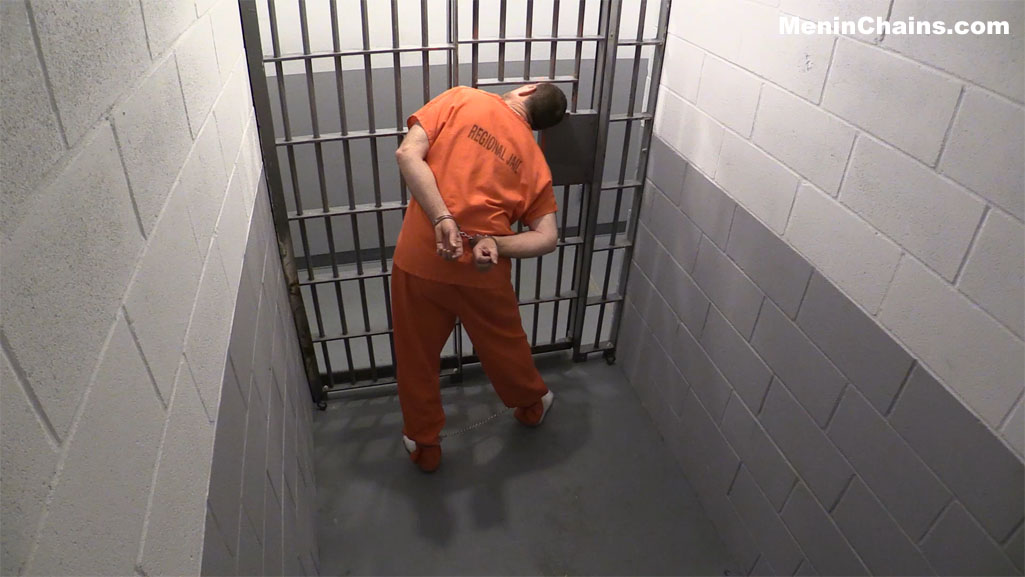 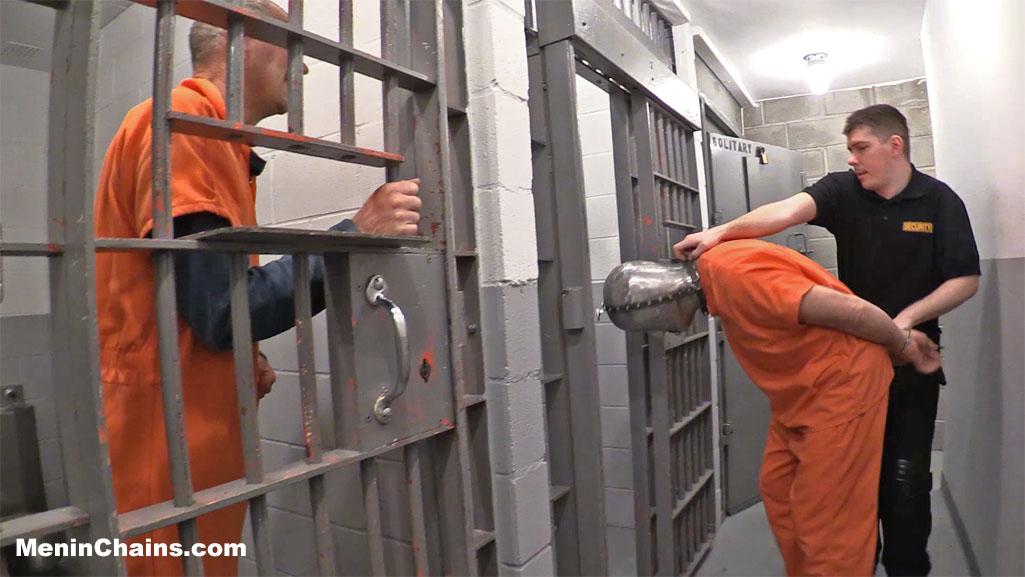 This video is now available at Men In Chains 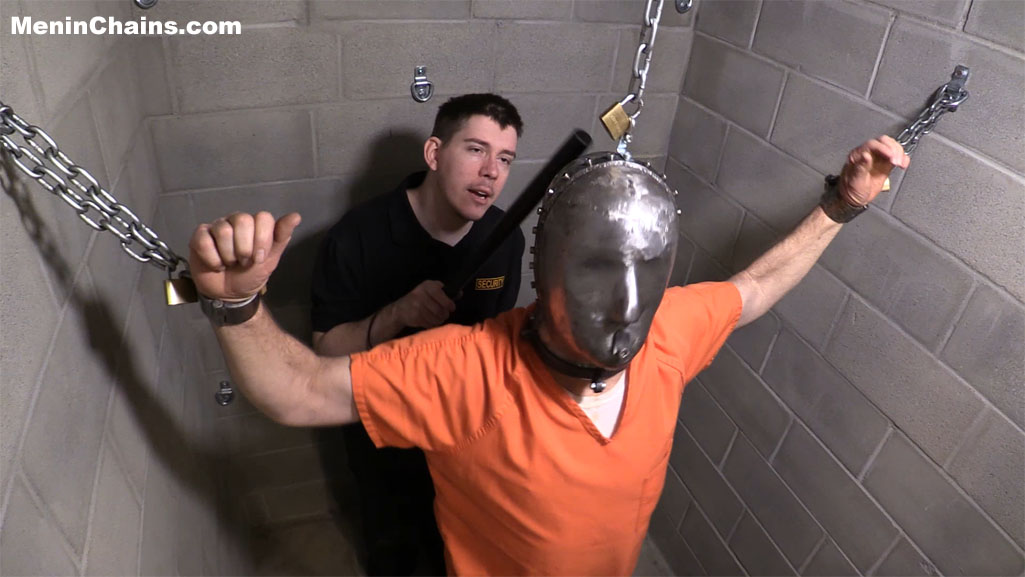