Note: This is a sequel to VRansomwear. To start at the very beginning, click here.

1: The Prisoner And The Picnicker

The prison cell is not large, maybe ten feet by twelve. There is a long extension at one corner, almost a hallway, at the end of which is a toilet and a sink. The walls are rough-cut stone, dank and dripping with moisture, spotted with lichen and streaked with mineral trails left behind by centuries of trickling water. The air seems like it should be clammy and cold, but instead it is clammy and hot and Bill often finds himself pressing himself up against the stone to try to have it suck some of the excess heat out of his body.

The lighting is dim. Any color that might exist is washed into formless shades of grey. The light comes from nowhere in particular, which is odd because the cell has no windows and there are no light fixtures anywhere that Bill can find. Yet somehow, he can see, though in a limited, gloomy, dismal way. Depressing as it is, at least he’s not stuck in complete blackness.

He has been locked in this cell for what he believes to be more than a week. It is hard to measure time, of course. He is fed occasionally, though on no schedule he can predict, and there is never any change in the light level to draw a distinction between day and night. The only thing keeping him from going insane from boredom and isolation is the occasional arrival of… well, call them “visitors”. Like the food, the visitors arrive at unpredictable intervals and for as long as they are there in the cell with him, boredom and isolation are very low down on his list of troubles. After the visitors leave, after an initial period where he appreciates and enjoys the restored peace and quiet, that’s when the boredom and isolation start to nag at him once more.

He has tried to find a way to escape, of course, but every attempt so far has been unsuccessful. His last serious effort was some unmeasurable amount of time ago. Perhaps two days, maybe three. Since that failure, he has been unable to think of anything to try next. There is one main reason for that:

END_OF_DOCUMENT_TOKEN_TO_BE_REPLACED

Alpha released Pretty Boy’s hands from the eye-bolt on the wall and the slave removed the four rubber restraints from the boy’s wrists and ankles. The slave handed Pretty Boy a towel and he dried himself off.

Alpha led Pretty Boy from the shower room back into the room where the intake had taken place. Pretty Boy noticed the black wooden bondage table against one wall, the medical exam chair with stirrups in a corner, and the wall with steel rings and metal restraints at various location. He was naked and there were a lot of places he could be restrained for whatever was going to happen next.

Alpha led him toward the black wooden bondage table and Pretty Boy began to wonder what would be done to him. But instead of being motioned to climb onto the table he saw a folded set of clean prison scrubs and a clean pair of white boxers. Alpha pointed to the clothes and the boy got dressed.

Alpha roughly pulled the boy’s hands behind his back and Pretty Boy felt a pair of handcuffs applied to his wrists, and then Alpha and the slave led the boy out of the intake room and into the room where he sat on the floor when he was first brought to the camp. That just yesterday, Pretty Boy reflected with in amazement.

The slave laid a pair of clean flip-flops on the floor and pointed to Pretty Boy’s feet, motioning for him to put on the flips. Pretty Boy looked at the slave with confusion; the Commander had said he was going to barefoot his whole time at the camp. The slave looked at Pretty Boy and said, “It’s to keep your feet clean as you walk outside.”

END_OF_DOCUMENT_TOKEN_TO_BE_REPLACED 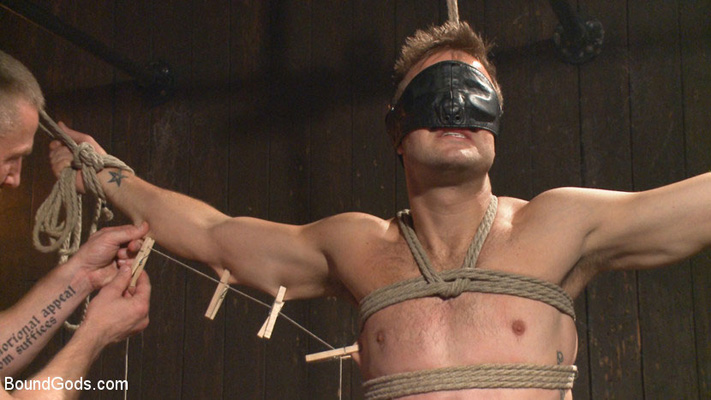 Connor Patricks has been locked away for days in Adam Herst’s workshop, stripped of his clothes and dignity. Adam rouses Connor from sleep in a cramped cage and face fucks the prisoner through the bars. Harder thrusts answer Connor’s pleas for release. Adam binds Connor upright, blindfolding the captive with arms outstretched to hold heavy weights. Connor’s tormentor warns him against dropping the load as he licks Connor’s torso and legs with a riding crop. Adam raises the stakes with a clothespin zipper on both sides of Connor’s body, tying the line to the weights. He puts Connor’s nerves to the limit with the threat of a cattle prod and finally sticks his plaything. See the VIDEO of this shoot here Chris stood in a dim lit corner of the back bar. It was leather night at the Hammer, the local fetish bar. Every few years, when passing through this city, he had dropped in. His score rate here was average, but even if he didn’t find a hookup he enjoyed the atmosphere.

At the moment he had his eye on a pair of boots. He had a passion for a man in boots. These were laced all the way up to the man’s knees. They were black and were shined to a high polish. Chris let his eyes slowly work their way from the top of the boots to the man’s package. Tight red rubber emphasised two well-developed thighs, which in turn helped to define a tight pair of arse cheeks.

Sweeping his eyes up further, the body was defined by a two-toned rubber military shirt. The shirt was obviously designed to enhance a broad set of shoulders and two well developed pecs. Above the shoulders was the lightly bearded face of a man in his mid forties. Gently he let his eyes travel back down to the boots. He could almost taste them as he pictured himself worshiping them. If he had a weakness, it was a great pair of boots, particularly when they were a natural extension of the wearer.

Chris cursed the 20mg of Cialis he had taken before coming out. Even though he didn’t need it at all, he enjoyed the sensation of the slightest provocation sending him rock hard instantly. Now, however, with a mind of its own, it was trying to force its way out from the rubber codpiece of his jockstrap in no uncertain manner. The fact that his rubber cock ring would not release the blood from his engorged cock was not helping the situation.

END_OF_DOCUMENT_TOKEN_TO_BE_REPLACED 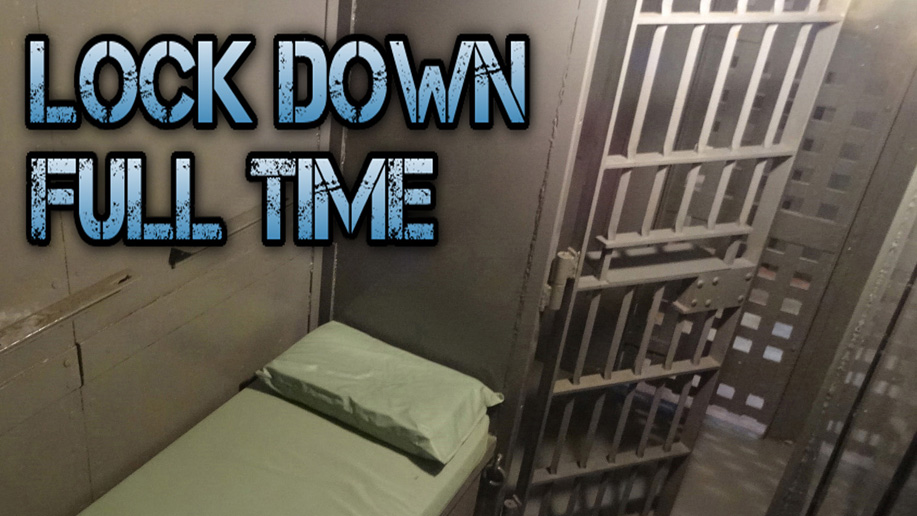 What will our friend Bind think up next?!?! He is going to be in for it big time with his latest planned stunt, which he is calling “Lock Down Full Time.”

“Starting May 31, I will be getting locked up on a full-time basis. Each day of the lockdown will be documented and posted on Men in Chains the following day. So June 1 will be the first video. People can vote to keep me locked up. Every vote that someone makes will extend my time one hour. They can also let the guards know what kinds of bondage that they would like to see me do. Votes are already coming in, so I already have a few days to do before it even starts.

“I could be locked up full time for a week, month, or even longer depending on how many people decide that they want to keep me imprisoned. Each day I will be taken out of my cell and placed in different bondage situations and then returned to the cell again. Each moment of my time will be under the control of a guard. There will never be any opportunity given to me to escape. This is the opportunity for viewers of MeninChains.com to see a daily video of my adventures as a 24/7 prisoner.

“As I said, I don’t know how long I will be kept locked up. I am preparing myself for the possibility that it could be months.”

To vote, go to Men In Chains.

Be sure to vote early and often, as they say!

Many will remember the “19 Days in a Padded Cell” long-term bondage scene, which was extensively documented in real time here on the Metalbond site back in 2013.

If you are not familiar with this true-life experience between “The Warden” and “The Inmate,” or if you would like to read about it again, click here. 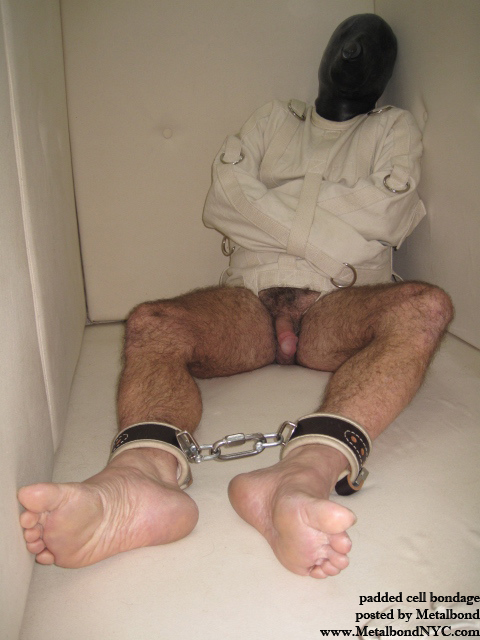 Now, Serious Male Bondage has posted an update with even more information, including text, photos and video:

Thanks to Mark of Serious Male Bondage for putting this together! 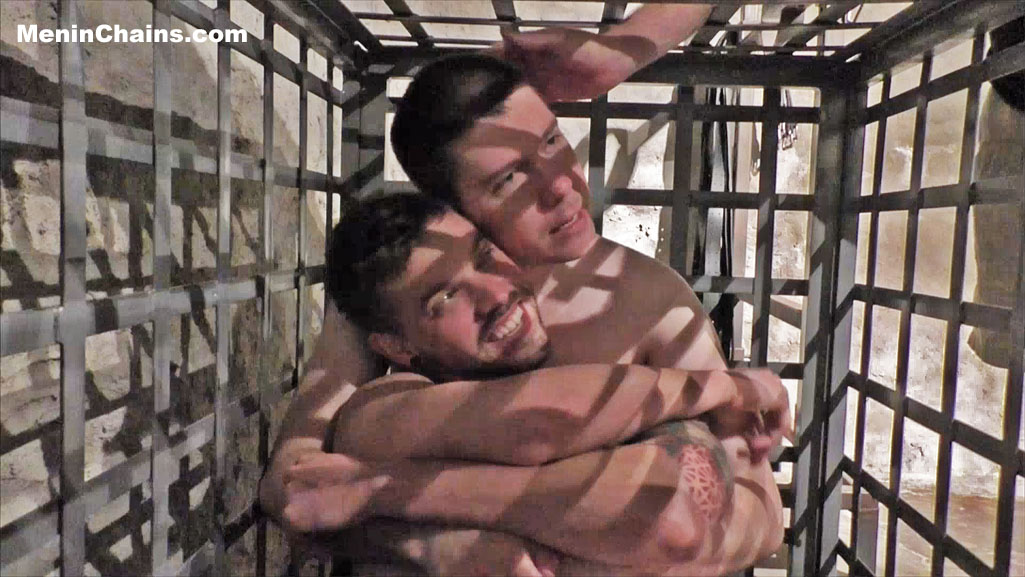 Here’s another update from Men In Chains! 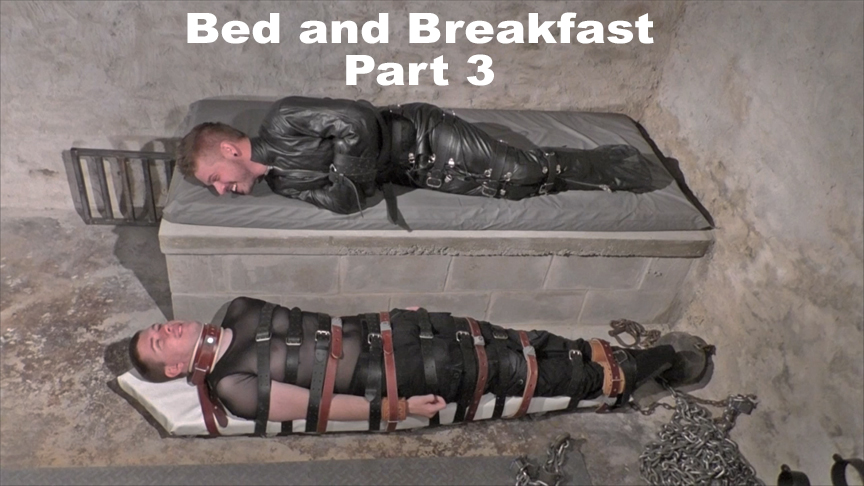 The author known as POW has posted a new story to his Gay S&M Stories home page. It’s called “Escape Room Challenge,” and it’s definitely hot and exciting if you ask me! Be forewarned, though, that it is very long, and it also contains some messy play in the second part. It gets even more edgy — and hot — in the third part.