Thanks to Mark at Serious Male Bondage for the pictures!

Thanks for the book, Steve! 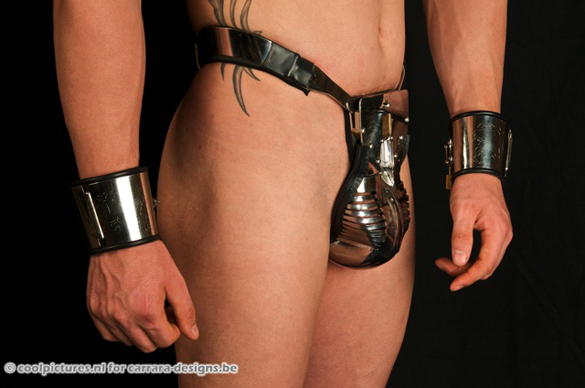 As you know, I am fascinated by things that LOCK.

And when it comes to chastity, there is nothing better than a device that has a serious locking mechanism. Like the Carrera. Lately I have been quite intrigued by the this particular device, and so I asked a ccontrol, a reader of this blog who is familiar with both the older and newer models, to describe the actual locking mechanism.

The pictures and information below is from ccontrol.

How the LOCK for the new Carrera chastity device works

The old belt is built around an Abus brass padlock. A slide knob above the lock is for releasing the tangs after the lock is unlocked. A push tab on top secures the tangs and locks the padlock. The teeth are hidden inside the front panel, and the tangs have simple knobs on them that are engaged by the teeth.

The new belt is built around an Abus Diskus lock. There is a similar slide knob, but it doesn’t do the same thing. Instead, you put it in the up position to be able to turn the key, and you put it in the down position to be able to move the tangs in and out. The teeth are on the tangs, making the new belt seem even more like a giant handcuff than the old one.

Much like a handcuff, the new tang ratchets in. With the old belt, the tang is inserted and then engaged with the hidden teeth by feel. You can count step down the slope of teeth until you get the fit you want. With both belts, the teeth give you some adjustability.

On the new belt, there are short levers in the insertion slot, just below where the tangs go in. These must be pushed upward to disengage the tangs for removal, after you have unlocked the lock.

You can see on the old pics where the key is inserted vertically into the bottom of he padlock: 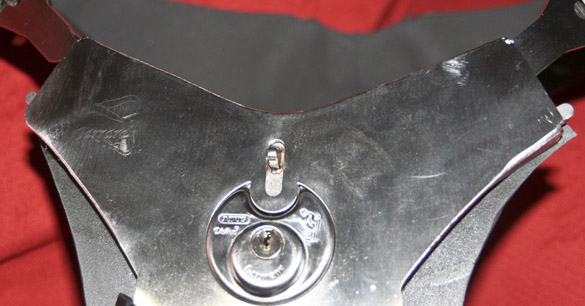 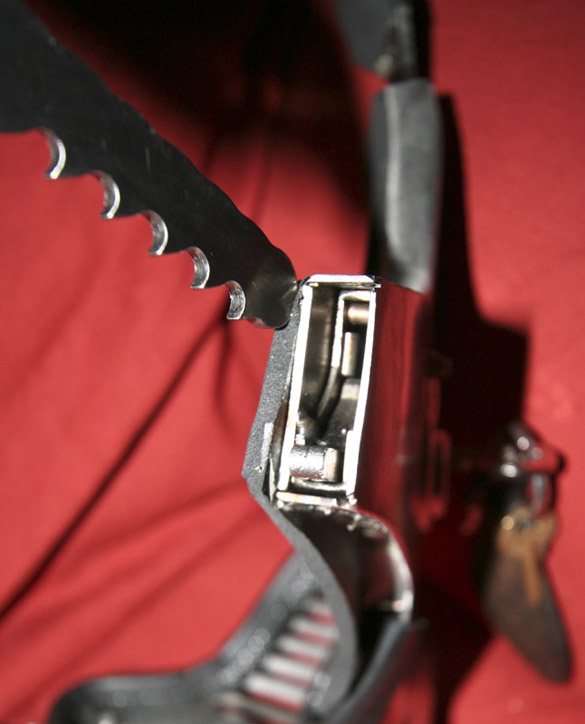 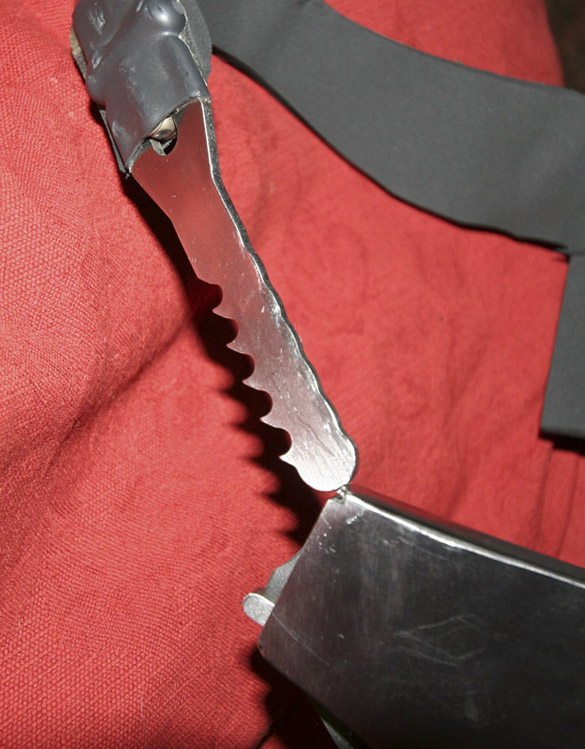 To make it into this recess, Walter had to trim one side off of the head of each key. This confined area means that the key can’t be on a keyring when you are unlocking the belt — and not having the key on a ring makes it easier to lose (I only lost one of my two keys, LOL). The new key goes straight in and can therefore be left on a ring. On the other hand, it can’t be removed while the lock is unlocked. This is a minor detail, but it means that you can’t send someone the belt to lock themselves into without them also having the key (for example).

The old belt has a flat steel strap in back. It has 5 holes drilled in the top where it attaches to the back of the belt, so it can be adjusted for size.  The new belt has a coated steel cable instead of the strap. It also has 5 holes on the end tab for adjustability.

The new belt is curved downward along is top edge to accommodate a bit of belly. However, the whole front part is a little taller on the new belt, so is more likely to dig in to those of us who aren’t perfectly flat in front: 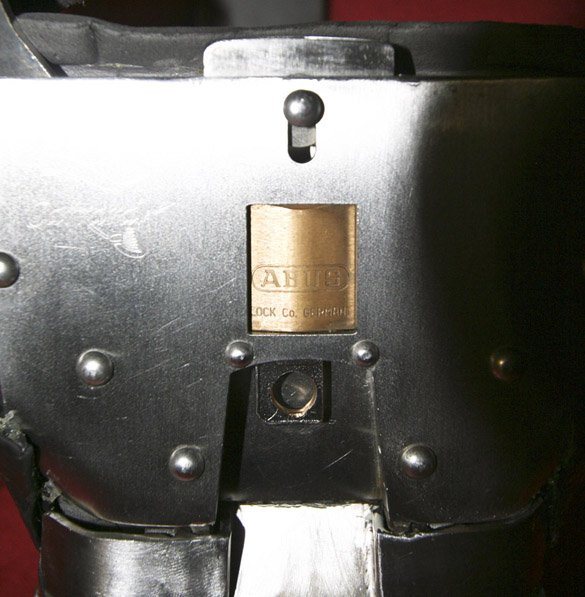 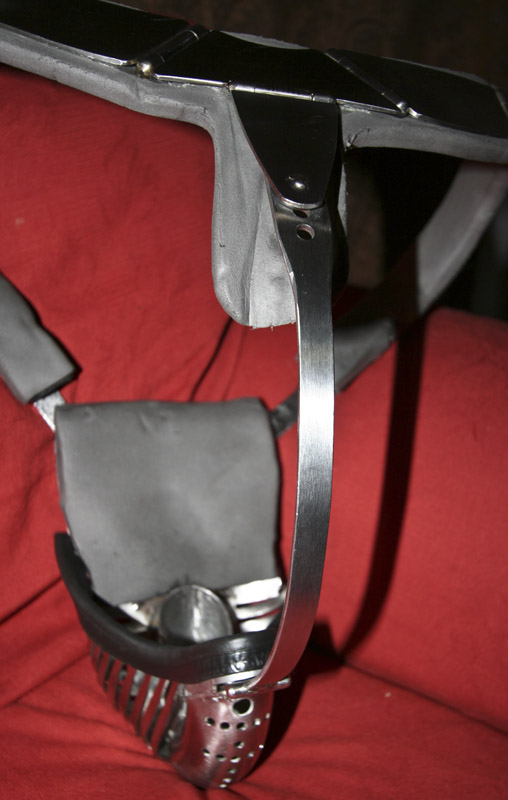 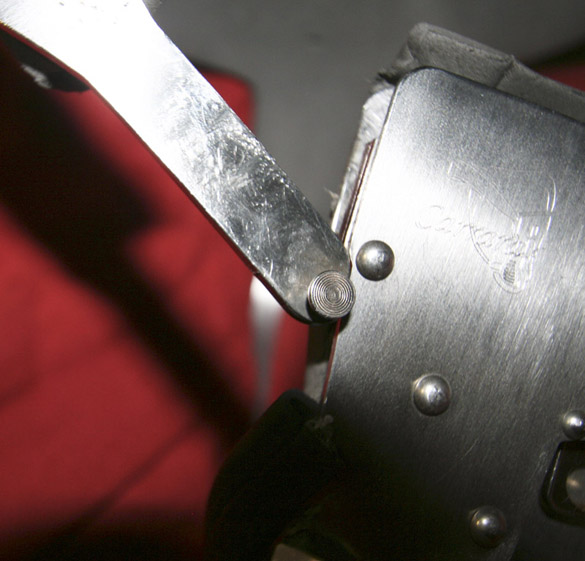 You can’t see them in the pics, but there are drain/vent holes on the underside of the tube. They are of course too small to allow for any stimulation … and there’s no big gaps to bulge through like there are on CBX000 or Curve devices.

On the inside pic you can see a screw hold in the base of the cable. This is for attaching an oval plate with a slot in it. An optional butt plug has a metal bolt that engages with the slot. The slot means that the plug will be in the right position to line up with your hole, but it is not removable while the belt is on.

These things are the Rolls Royces of chastity belts. I saved up for years to afford them, and they’re worth the price and the pain of waiting for them to arrive, and the time spent bending them to make them fit, etc.

Metalbond would like to thank ccontrol for the information and pictures above. 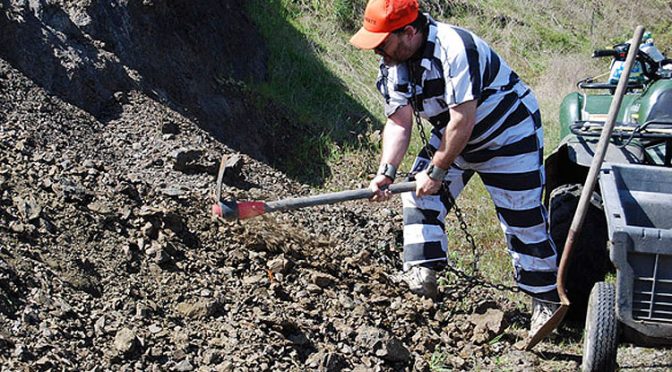 Inmate Chuck spent a few days at the infamous BlackSteel Correctional Facility run by Yossie, where he was required to sleep in a cold cement jail cell at night and shovel rock and fill pot holes during the day — all while wearing a set of heavy steel “five-way” shackles (neck, wrists, ankles), which were RIVITED-ON. Much more pictures of this, plus video, are available at Serious Male Bondage.

“ccontrol” send the pictures and information (below) of his Carrara chastity device: 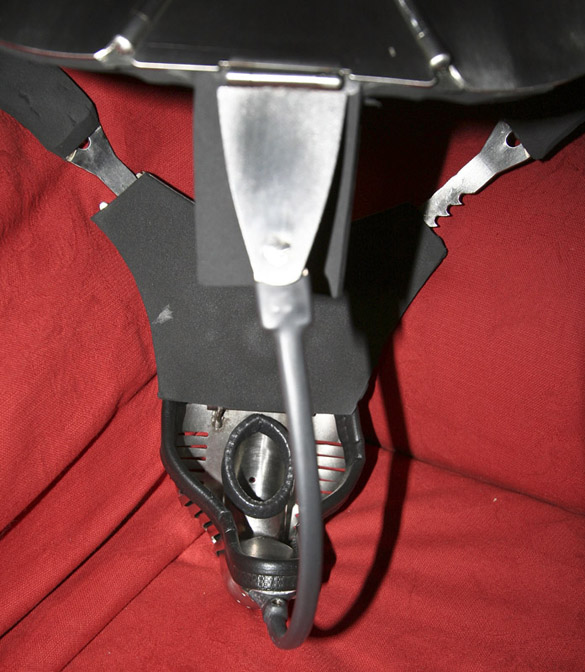 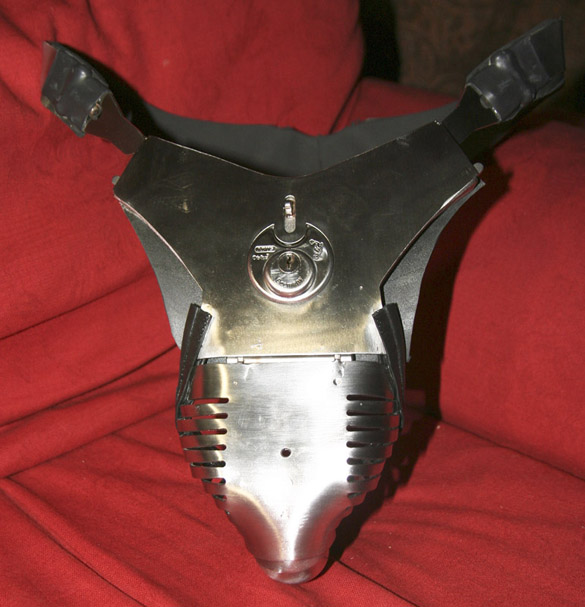 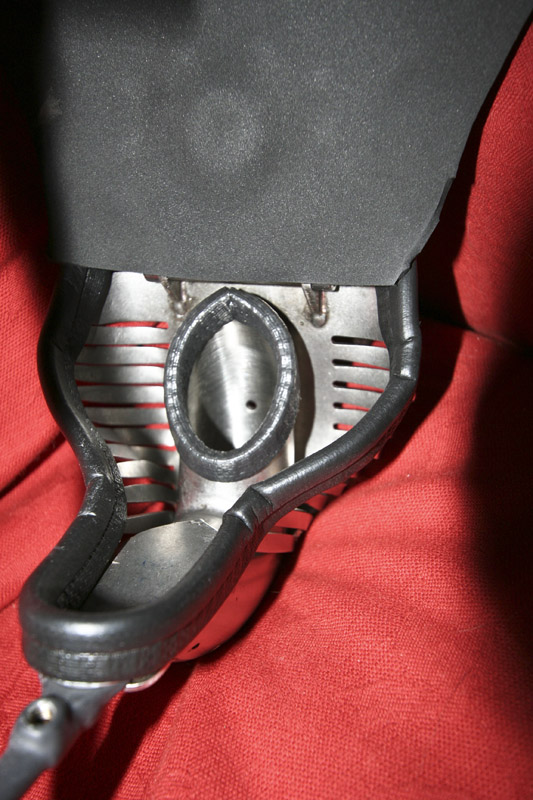 Love the site. Here are a few pics of the newer Carrara belt design with the new locking mechanism and the new, coated cable in back.

The front of mine is flatter below the locking mechanism than the one you posted pictures of a few days ago. This is not because of the new design. It’s because of the tube size. My 4-year-old Carrara belt is also flat in front. I was bummed when it arrived and it didn’t have the bulge, because I think it looks better the other way. On the other hand, I have it on good authority from Walter and a few other people that the belt is most effective at orgasm prevention if the tube is the absolute smallest you can coax your dick into.

Metalbond would like to thank ccontrol for the pictures and information.