Apparently the NYPD paid a visit to the Eagle bar in NYC last night, right around the time the same sex marriage legislation was being voted on. To read the article on the NY Times website, click HERE.

Here are some comments I have received recently from blog readers:

I’ve always been massively into bondage, and your site has definitely led to me trying a few specific things. Me and my boyfriend tend to top each other, and your site has given me loads of inspiration in regard to what I’ve done to him!

I’m reading your blog almost daily. It is very good, the best I have seen on the internet. Keep up the good work!

Sure you get swamped by these sorts of messages, but I just thought I’d say how much I enjoy your site … and your profile on Recon of course. It’s inspired plenty of my own adventures, in fact reading entries on there pretty much led to my current thirst for chastity!

Keep up the good work!

My chastity keyholder has a rule for me about blogs while i’m locked up … once i’m sent to one, i gotta go through ALL the posts.

I have never once entered your blog without getting turned on … big time! How do you keep up the excellent work day after day?

Take care and THANK YOU for helping to maintain my fantasy life (I’ve got a real one too, but, though it involves play as top and bottom, I love the stimulation ) .

just a quick note to say thanks for Your site.  as evidenced by the list of links on the side of Your page (and others’ pages), there are a lot of sites out there for guys who share our interests.  but Your site has easily become the one i check first, multiple times a day.

as a bondage/kink sub in a relationship with a vanilla guy, i’m often on the hunt for good bondage content online…and i devour every single post on Your site.

just locked myself into my cb3000 for a few days — and yet again, i check Your site and it drives me insane. In a good way.

And my balls would also feel the effects. 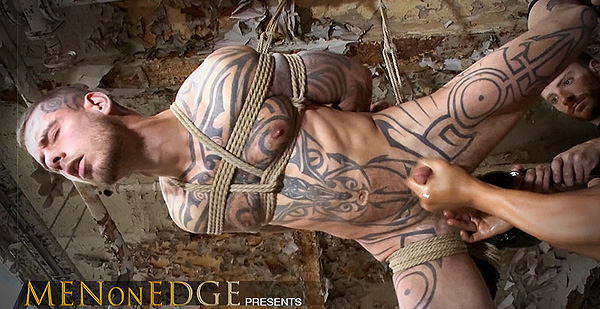 The back of that bike is probably the most zen like moment I have ever experienced, the roar of the bike translating up though the plug, the darkness that surrounded me having to grip the figure in front of me, feeling a hard body under the supple soft feel of leather. The sensation of rubber clinging to my body as the heat built up.

END_OF_DOCUMENT_TOKEN_TO_BE_REPLACED

Check out the email I got from a friend of mine (posted here with the permission of both the participants):

I wanted to tell you about an experience I had last weekend while visiting my friend Yossie.  As you know, he is a blacksmith and metalworker, and likes making his own Irons which he enjoys riveting onto his prisoners.

He has been talking about making me an Iron Belt for some time; something he can use to fasten me into my cell (as if it was really needed. Total Bondage Overkill!)

Anyway, he took me to his workshop and fitted a flexible copper tubing around my waist which took on the basic shape; he was able to remove it while holding the shape of my waist.  He then placed it on a piece of paper on the floor and traced around it.  Now, the paper had a template for my waist.

Next, Yossie cut two strips of metal from one long piece of strapping.  He then used a special metal bending device to mold it into shape.  It took a long time, and many tries always checking against the template, but eventually he had bent the strips into halves of an infernal Iron Belt fitted totally to my body!

Then came the welding of the hinge.  Pop! – Hissss! He fired up his torch, and fused a hinge into one end of the Belt.  Next, he welded on some tabs which will eventually hold two rivets.  Then he drilled the holes in the tabs.  After cooling the whole thing down, he tried it on me for size.  It fit – well, like it was MADE for me!  He secured it with a padlock (rivets are for more long term) and I wore it the rest of the afternoon.

Fucking HOT if you ask me! I hope next time you get the rivets and stay in it for days or weeks!

It was that time of year again. The long winter had passed and as spring was moving towards summer, Sandro knew it was time for his motorbike to have its annual service.

His thoughts turned to the first time he had taken his bike to the motorcycle centre which was about 80km from the city in which he lived. That was a weekend he would never forget.

END_OF_DOCUMENT_TOKEN_TO_BE_REPLACED

Yesterday evening I was out sailing on Hudson River with some friends when I got an email on my iPhone and learned the sad news that Gene Kahn had passed away earlier in the day. According to the message, which was from two of his closest friends, he died of complications from heart failure and his death was completely unforseen. He passed from this Earth experiencing no pain, and “with his boots on.”

Gene was a longtime friend of mine. One of my very first encounters with him was way back in the mid-1990s, when I attended an out-of-town play event called Delta for the first time. It was Friday night and I had been in the main playroom for a couple hours, just watching, and acting a bit shy and self-conscious. When Gene noticed me hanging back on the sidelines, he came over and struck up a conversation. Before I knew it, he had me bent over a sawhorse, pants pulled down to my ankles, where he proceeded to give me a loving but very firm bare-assed hand spanking that went on for quite a while. When it was over — and I had not died of embarrassment as I had feared — a message stuck in the back of my mind, about just “jumping in.”

Lesson learned, I ended up having a fantastic time at the event, playing almost nonstop for the subsequent three days, and I returned many times over the years, often as a passenger in Gene’s rickety old beat up station wagon.

Gene wore many hats, and he was passionate about everything he ever did. He was a carpenter by trade, and I hired him on many occasions to help me in my apartment, installing cabinets and shelves. He had a couple of Dachshunds, whom he doted over like children. He was a cyclist, and in recent years he had taken to riding “fixed-gear” bikes. (If you don’t know what that means, let me just say that you have to be a real daredevil to ride one of these in New York City! )

He was not much interested in bondage, but he sure was kinky in other ways. He was skilled with a single tail whip, and he would spend hours practicing.

Gene was also a sailor, and he wrote a fantastic book on the subject, called Deep Water: A Sailor’s Passage (available on Amazon). It’s one of the most heartfelt, deeply moving books I have ever read. In it, Gene explains his love of sailing and also his love for one man — his life partner, Kevin.

It wasn’t until after Gene’s book came out that I ever even stepped foot on a sailboat, but now I love it. It’s funny how things happen sometimes, that I was out sailing when I learned about Gene.

Sail on, buddy. I am going to miss you. Kristofer also met up with Ruff from the popular Ruff’s Stuff blog: … and he also found time to tie up some hot guys: I couldn’t make it to IML this year because I had to go to Montreal for work. But you can find out more about IML at the Mr Kristofer and Ruff’s Stuff blogs.