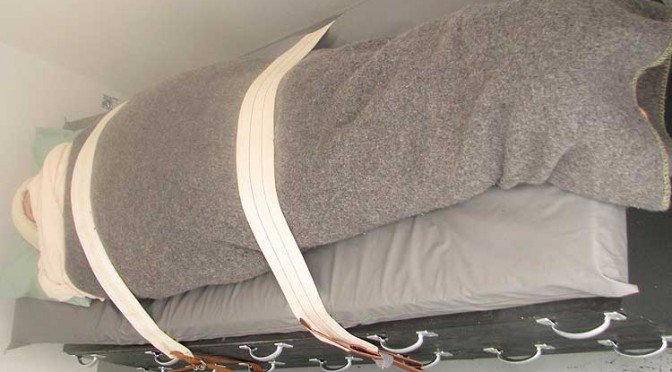 As I have previously noted, Rockview Mental Institution is modeled from the period of the late 1940s and 1950s, before Thorazine became the preferred method of controlling and calming the disturbed patient. In that era the straitjacket, the padded cell, four-point restraint, therapy baths and the cold wet pack treatment were in common use. The staff at Rockview concluded that I was still too agitated despite the treatments I had experienced during my first full day and second night. It was time to up the ante so to speak: I would be subjected to the wet sheet pack.

The treatment involves wrapping the patient from neck to below the feet in cold sheets and heavy blankets. The body heat from the patient warms the sheets to a very warm state; the transfer of heat requires tremendous work on the part of the body and the patient is left lethargic and exhausted from the experience. Doctor removed my uniform and socks from the room as Mr. Bind ordered me to lay down and the mattress. There was a vinyl pillow for my head that helped position me on the mattress. The wet sheet was not just cold, it was very cold. As soon as I was positioned with my head on the prison pillow I was directed to raise my arms above my head and Mr. Bind and Doctor moved immediately to place the right side of the wet sheet across my body and tucked well under my left side; they turned my body so that the sheet went well under half of by back from the neck to the legs and feet. I could feel the heavy wet sheet hanging over my feet. Mr. Bind and the Doctor worked in tandem making sure that the sheet was tight and smooth across my body. After they were satisfied that the sheet was secure, I was directed to lower my arms to my side and the left side of the sheet was passed over to the right side and tucked under locking my arms in place, my body being turned to allow the sheet to again be well under my back. The two staff members had to be convinced that the sheets were smooth and tight up and down my body.

The sheets were so cold and I shivered as the blankets were placed over my body just as the sheets had been and the procedure of tucking the blankets tightly under me was repeated. Doctor lifted my legs and feet and tucked the bottom of the wet sheets and blankets under my ankles and lower legs.

I could feet the cold heavy wetness soaking my body from the neck all the way down. I tried but could not move my arms as the wetness held me tightly in place and my body weight held the sheets and blankets securely in place. I unsuccessfully tried to move in any direction; how did Houdini do it? A towel was placed behind my neck and crossed over in front trapping the increasing heat from escaping.

Mr. Bind and the Doctor then used two canvas belts, one over my chest and one over my hips to prevent me from trying to sit up or shift from side to side so that I might gain some minor form of slack. Again, failure on my part, I remained locked in place. A cold compress was placed over my forehead to help dissipate the head of my head. Doctor has used a towel as the compress as it would absorb the heat and keep the head cooler and changed the compress every fifteen minutes or so.

The lights in the observation room were turned down low to help with the psychological impression of relaxation. I felt the cold wetness as it seemed to be absorbed by my skin. Slowly, very slowly, I could feel the severe cold moderate. Over several hours the cold damp feeling was being replaced by a warm to almost hot damp feeling. My shivering was replaced by a gentle warmness as my body heat struggled to convert the cold to warm and I started to relax.

Initially the Doctor stayed in the room with me waiting for the calming effects to take place. I was aware when he left the room and closed the door to keep me from being distracted or stimulated in any way. The previous night I had a good deal of sleep and I did not believe that the treatment would work. I felt invigorated when I first entered the treatment room. But as time passed I started to relax to the point that I fell asleep on my back. The Doctor later told me that when he checked on me he could hear me lightly snoring. I woke up when I heard the door open and Doctor and Mr. Bind entered the room.

I had been cocooned for almost three hours when they started to release me from my bondage. They worked carefully, slowly and projected a sense of calm as the canvas strapped were removed, the blankets were pealed back and the cold sheet, now warm, were pulled back slowly. Doctor brought in a towel so that I might dry off the moisture on my skin and I moved slowly to the bathroom to peal off my soaked boxers. I changed into dry boxers and dressed in my orange and white jail uniform and pulled on the crew socks.

I needed the towel to keep my shoulders warm, and after a light lunch of a turkey sandwich, potato chips and water, Doctor thought that I should be strapped up in a leather straitjacket to keep me warm. I was taken back to my hospital room and allowed the leather jacket to slide up my arms. It may seem strange, but it really felt good being strapped very tightly and securely in that heavy straitjacket. Again as with the canvas straitjacket I wore the day before, I could feel the jacket hug me from my neck down my torso to partially cover my hips.

Doctor introduced me to the Mr S Puffy Leather Sensory Depravation Hood, and after looking at it I allowed him (translation, I did not protest) to lace it very snugly into place over my head, and my world went dark. I could feel the very soft leather of the hood as it pressed against my face and, unlike my first experience with a hood, I did not feel claustrophobic wearing it.

Now blind, I was led slowly down the hall to the awaiting padded cell. Photographs were taken of me from various angles in the padded cell and then the door was closed and locked shut. I was standing in the cell, my feet sinking into the four-inch padding as I walked back and forth, being stopped by the soft walls. I tested the padding by deliberately banging into the walls. I tested the security of the door; it held fast. The only sensation I had was the recoil as the walls prevented me from going further. I was in heaven. From the years of reading about Houdini, straitjackets and padded cells I was experiencing the reality of being in seclusion. My world was dark, soft and quiet and I revealed in the experience. I was disappointed when I had to be removed from the cell as Doctor needed to do some work and would not be able to monitor on me. He removed the hood, but at my insistence, I remained in tight, warm, calming hug of the leather straitjacket. I was taken to the hospital day room and sat on a wonderful leather sofa and watched the weather channel on the large screen TV with Doctor. Of course the staff chose what the patient may watch, but I was in a state of euphoria and could care less what was on. I remained in the straitjacket for a total of four hours and felt disappointment when it had to be removed.

I didn’t know it, but my time in the facility was coming to an end. Mr. Bind and Doctor informed me that they had determined that I was not delusional and would be released from the hospital early that evening. I was reluctant to change from my jail uniform back into my own clothes. In celebration of the confirmation of my saneness, I took the staff to dinner at a local restaurant.

Local is a quaint term in southern California; it took 20 minutes to drive from the hospital to where we had dinner. It was night when we went out, and I still do not know where RMI and MCP are located. When we returned to the hospital it was time to pack and prepare for an early morning departure to get to the Ontario airport for a 6 A.M. flight. Before my official release Mr. Bind and Doctor advised me that I would have to return for actual imprisonment. My next visit would require arrest and incarceration at Men’s Central Prison for having violated state law by trying to escape my first night.

A Message from the Staff of Rockview:

The staff at Rockview Mental Institution warmly thanks the patient for his colorful portrayal of the events that he claimed happened here. We can neither confirm, nor deny his story. But we will state that he was a mental patient of our mental institution, and based on this story suspect that we will be treating him again for his delusions. (It was a pleasure to have him here. We thank him again for such a detailed report.)

Metal would like to thank Straitjacketkwf2 and Bind for this story and pictures! You can learn more about the facility by visiting Bind’s site, Men In Chains