Sullie is a black-and-white Springer Spaniel that loves birds. He was barking and jumping on the wire fence and his short tail worked enthusiastically, his full attention on the covey of quail that were moving in the short, dry grass at the edge of the camp clearing. Sulllie barked again and then the other dog ran over to see what was happening, eager to join in any excitement that could be had in the evening shadows.

The quail pecked at seeds and ants in the golden grass and fluffed themselves in the dust dry soil, just along the fringe of dark scrub brush that lines both sides of the canyon where the camp was sheltered. The canyon faced north in a series of brushy ridges in the inland ranges of the Santa Lucia Mountains, a remote location where few ventured.

Late summer evenings, when the sun was setting and cool air flowed down every canyon, was a time when all of the wildlife would come out on the Bear Trap Ranch. A coyote padded down the road toward the gate and deer looked for some tasty green buds hidden among the spiny dry brush.

But the Captain was not giving any of them much attention; He was intent on the scene in front of him. The slave was strapped down to a sawhorse the Captain had specially fitted for the slave. His chest rested on the wooden top and his elbows and knees rested on special pads attached to the front and back legs. His legs, arms, wrists and torso were tightly bound to the sawhorse with lumber straps that bit into the black, sweat drenched wrestling singlet that showed off his lean, tight, muscled frame. Ben’s head was completely covered with a tight rubber hood with a breathing tube pushed into his mouth. A tiny valve on the tube restricted the amount of air he could gasp through the tube. The slave’s head was spinning from the lack of air and the deep tingling of electricity in his balls. His cock, sticking downward out of a hole in the singlet, was painfully stiff and streaming a line of slick juice down to the dirt. 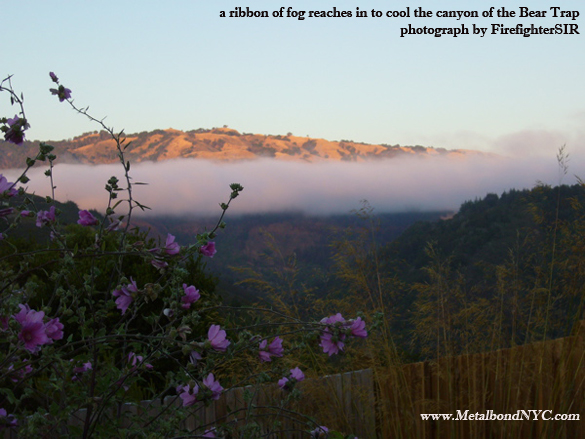 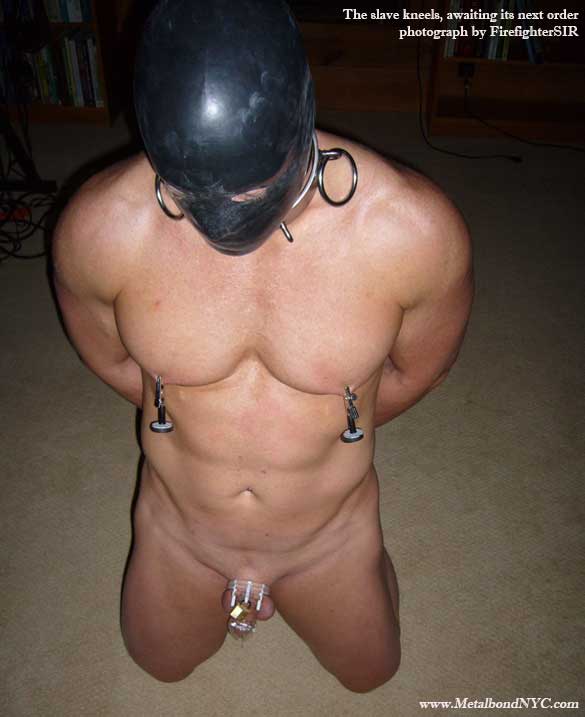 Ben moaned and more juice dripped down as the intensity of the pulse to his nuts increased again and his whole body jerked against the straps. He was sweating buckets and grunted more and more as each new pulse worked his churning balls. His moans drove the Captain’s lust.

Totally naked except for his heavy black boots, the Captain was not only manipulating the pulses to the slave but also thrusting his own rock hard rod into the ass of the other captive, the CHP officer, Levi. Levi was strung up by his wrists, spread-eagle bound with a spreader bar cuffed to his boots. His dark, lightly furred muscles were stretched out and slicked with sweat as his hooded head lolled back onto his shoulders and his own moans mixed with the slave’s. Levi gasped as the Captain bit into his muscled neck and pumped his rod deep into the patrolman’s tight asshole. Levi’s own cock was plunged deep into the bound slave’s hole, and the Captain fucked the two holes in tandem. The Captain wrapped one arm around the patrolman’s middle and pulled hard on the electrified clamp biting into his right nipple. Levi gasped and moaned.

The Captain responded by biting down hard on his thick neck meat and pulled his cock out to the very edge of the patrolman’s hole, held it there momentarily, and then drove it deep into his ass. Levi flexed and cried out but flexed again when the pulse to his nips increased. The slave also cried as best it could through the hood, his own hole being brutally raped by the CHP’s massive tool.

The Captain and the spread-eagled patrolman were now slicked with sweat and each movement created a wet smack as His chest met the muscled back of the CHP. The Captain grabbed Levi’s tight waist and pulled his body back until his huge, stiff rod popped free of the bound slave’s ass. The huge head was purple and shining, slick with precum.

“Clean,” he announced with some satisfaction, and guided the pole back into the slave’s clenching hole. The slave moaned and his cock jerked, his balls drawing up. The slave had passed one more test, the test of having a clean hole ready constantly for hard use. The Captain was very pleased and began to thrust into the patrolman’s ass with renewed gusto, pulling on his waist to make him rape the slave’s hole in unison. Three men were grunting deeply, sweat dripped down Levi’s furred abs, and spread legs. The Captain felt more than saw Levi begin to stiffen and his arms tighten in the chains as he reached climax and shot a load deep into the bound slave’s sore asshole. Levi screamed.

The Captain whooped in lust and pounded at the patrolman’s hole with rapid strokes, forcing yelps and grunts of pain from Levi and muffled screams from the slave. They had shot too soon and the Captain was going to get off on their pain and torment to fullest extent. He reached for the electro control and ramped up the dial.

Both bound men flexed and stiffened with electricity coursing through the bodies joined at the cock and ass. Levi’s head dropped back and he yelled.

AAAAArrghhh!! NO NO no no NO! Ahh fuck! Ahhh please stop SIR! AHHHH!

Both men moaned, but the Captain is not one to hurry his own pleasure. He turned the control knob again and both captives flexed with the jolts of electricity to their respective electrodes on balls and nips. Levi grunted loudly and protested but the Captain kept his cock deeply planted in the CHP.

The Captain found renewed vigor in listening in the grunts and gasp of both men and begin to pump Levi’s ass again, this time pulling his hips away from the slave so that Levi’s cock was slapping against his own tight abs. The Captain reached around and began to massage the shaft with one hand, the other pull and crushing his bull balls. Levi’s head rolled back and his mouth sought the Captain’s trying hard to kiss his lips even as he panted from the pain in his nuts. The Captain’s stroke of this worn cock echoed the thrusts to his abused ass and the patrolman flexed into each pump with his entire stretched and bound muscular body. Through the whole ordeal, the Captain continued to rape Levi’s hole, his own tanned, and furred body was drenched in sweat and radiating the heat and scent of a true Alpha male in rut.

The slave struggled in his bonds, eager to be part of the intense raping. His own cock was still stiff and dripping, as the Captain had trained him. He struggled to gasp through the breathing tube and his whole body was slicked with sweat with the drenched singlet stuck to his muscles.

The slave could feel the massive body of the patrolman atop him and wished he would reach and stroke his slave cock. Even as he though this, Levi reached down and gripped the slave’s massive tool. He felt it up and down and then explored the two tied-off nuts. Ben moaned and panted and his hole clenched.

By then the Captain had finished his shower and strolled back over to the two exhausted subs. He slapped away Levi’s hand from the slave’s cock.

“The only cock you serve is Mine, boy!” he growled and pulled the muscle man off the slave. He reached over and began to unstrap the slave from the fuck bench. The slave’s arms and legs were totally numb, and he slumped to the ground as the final strap was removed. The firefighter wasted no time in dragging him to his feet, even though the hood was still in place and attached a leash to his metal collar. The slave stumbled and almost fell but the naked Captain grabbed him again and supported him.

The Captain looked back at Levi.

“You. Shower. Now,” He barked. “Slave. Walk. Now,” he ordered the wobbly muscle man. The slave tried to gain his balance with his head still encased in the tight hood. The Captain jerked the chain and guided the slave off the patio and down the path into the garden.

Crickets were singing in the cool night air and the dogs padded along behind them both. The Captain took the slave in a long circuit to get the blood flowing in the slave’s abused limbs but kept the hood locked in place.

The firefighter looked around to find the patrolman who was huddled at the far edge of the fire in a robe. He motioned him forward and undid the robe belt just as he pushed the slaves eager mouth toward His own cock. The Captain looked at the patrolman’s muscled body with lust and cupped Levi’s cock in his own hands. He began to lick the patrolman’s cock and paused long enough to order the slave:

The slave took his Master’s meat as ordered and began to swallow the thick cock.

Metal would like to thank the author, FirefighterSIR, who can be found on Recon, for this story!