After I’d written my story “Conversion”, which was a fantasy piece where I was transformed from a human into a human urinal by S c o t t  C a a n and a number of other anonymous men in wetsuits, I was approached by a loyal reader of the Metalbond blog. (He has requested that I keep him anonymous, so I will respect that.  You will understand why by the time you reach the end of this story. For literary purposes, I will simply call him KH.)

KH had contacted me about a month after Metalbond posted my Conversion story, telling me how he enjoyed my writing and found several parts of it to be hot.  We exchanged some emails and I asked him which part he found the hottest.  He replied “the whole thing, really, but especially that there was no hope of escape.”

I told him that was a strong fantasy of mine, but that in reality it probably couldn’t happen, since there would most likely be legal consequences for whoever put me into that.  He said that he could probably find a way to make at least a part of it happen, if I would trust him with my mailing address. I said sure, and sent him my PO Box number.

Within a week, I had a package, and it had come via Certified Mail, which meant I had to sign for it.  When I got it home, I was surprised to find a steel chastity cage from Mr. S Leathers and a numeric encoded brass lock. There was an envelope addressed simply “Aqualaguy”. I opened the envelope and there was a neatly typed note.

“I am typing this because I don’t want you to have any clue as to my real identity until you’ve made your decision and it’s too late for you to change your mind.  Obviously you now know which part of your story I can make happen, so you now need to decide if you can live it.  Make no mistake here; this is not a game with me. The decision you make will be a decision you live with.

“You can decide to pass on this chance, and if you do, you will probably never get another opportunity to wear an enforced long term chastity device.  Or, you can decide to put it on, using the lock I’ve provided, to which there is no key, meaning that you’ll put it on with the full knowledge that you’ll not take it off again.  I’ll give you a little bit of time to think over your decision, because I don’t want you to make it lightly.  If you are going to put the cage on, I expect you to be locked up by midnight tomorrow, and to send me a photo via email to (his email address was here). If you do not have the cage on by midnight tomorrow, don’t bother, just send it back and I’ll post how much of a phony you are.

“Remember, you had to sign for the package, so I know when you received it.  The reason I’m giving you until midnight tomorrow is so that you can have your final j/o session(s) before you forever sacrifice your junk to me. Think it over, decide well, and …. Well, I’m waiting for your email. I’m hoping you’ll lock your boys away for good.”

The invitation was way too good for me to pass up, as I have been interested in long term enforced chastity for years now, almost as long as I’ve been interested in piss gags. So it really was a no-brainer for me, but I still did some research to see if there were any physical dangers that could occur, and to check some chastity sites to find out what guys into the long term enforcement thought about it.  Everyone said that it would take time to get used to the idea that I’d not be able to get hard again, not be able to cum again, but I’d eventually get used to it, and the cage would feel like it was a part of me, as natural as wearing a jockstrap. We all also thought that the part about “forever sacrifice” was a head game, that nobody would truly lock another up for the rest of life.

I spent most of the day jacking myself off, but I finally decided that I needed to wear this cage.  So I stripped and pulled my junk through the base of the Samurai cage.  The waist band secured snugly around my waist, and fastened over the locking post, so that when I closed the cage, the belt would no longer be adjustable. I had deliberately jacked off just before putting the cage on, so that I wouldn’t get hard again putting myself away. As I started to close the cage, I admit I was having second thoughts “what if he really is going to lock me up forever?”  But I figured these guys on the sites were more experienced than I, so I worked my dick into the cage, closed it up, and slipped the lock into place.

I made one more thought about locking the cage, because even though I’d just shot my load off, my dick was starting to react to the cage, fighting it as if it had a mind of its own and knew that it was being sentenced to “life without the possibility of parole.” Then, I made the decision, and I snapped the lock shut.  Now trapped, I immediately started to feel the regret building up, but it was now too late. I was locked in, and unless KH sent me a key, I wasn’t getting out.  And there was NO room at all for me to get hard, or even to THINK about getting hard.

I took a close-up photo of the cage, a closer-up of the lock so KH could see the code number, and a full body shot in my bathroom mirror.  My camera automatically timestamps (it’s my cell phone) so I was able to email KH directly from the phone.  It took him all of three minutes to ring me and reply. We did some idle chatter for a couple minutes … you know, the usual, hi, how are you, what’s going on, that kind of stuff.  Then he said “I just got your pictures.  How does it feel being trapped in the cage?”

“Well, I have to tell you the truth, it’s tighter than I thought it would be, and I was expecting it to be a little more comfortable.  Not much, just enough to where I wouldn’t have to be concerned about chafing.”

“Well, you can use some gauze pads around your thighs until your legs adapt.  But you will need to adapt, because I wasn’t joking about the forever thing.”

“Yeah, about that” I said. “I was checking around on some of the chastity sites, and almost every guy there said that it wouldn’t really happen, that you were just playing a head game with me.”

The sound of his laugh at that statement made my skin crawl. “Of course they did!  I’ve been coordinating this for all these months, telling them exactly what to say if you should decide to check it out.  They were supposed to make you feel comfortable that you wouldn’t be wearing it for the rest of your life.  The fact that you put it on and locked it tells me they did their job well.”

I started to stammer, speechless, mumbling, but words just escaped me.  He was laughing ever so subtly but ever so sinisterly.  In the meantime, my dick started to mount a protest that I could no longer accommodate.

“I don’t say things just for the sake of saying them.  I made it perfectly clear that if you opted to put that cage on, you would wear it for the rest of your life.  You went into this with your eyes wide open, and all the information right in front of you.  The decision was yours to make, and now the consequences are yours to live with for the rest of your life.  Before I packaged that lock up, I destroyed the key and also filed down the tumblers inside the casing so that you cannot pick it open.  Your junk is now worthless, and will remain that way until you’re in your grave.”

I tried to ask him what I could do to get him to change his mind, but he just continued to laugh and hung up on me.  When I went to one of the chastity websites, I saw the photos I’d sent him already posted, and his gloating that he’d just taken down another sucker.  “Another dude who thought with his dick instead of his brain.  Now both his dick and his brain are forever mine.”

It’s been a year since I posted “Conversion.” It’s been almost a year that I’ve been locked in this cage. KH has sent me several taunting emails over the past year, all directing me to the chastity site, only to receive further humiliation. He is the admin on the main site, so my comments are never posted.  I know for a fact he has gotten another guy to put a cage on, because the pictures have been posted. I tried to warn the guy away from putting on his cage … but my words never made it to his screen.

I’ve seen him beg KH for release, as KH has posted his emails. I’ve given up begging, figuring that if I accept it for a while, he’ll eventually let me earn my release. But just yesterday, I received an email from another guy … a major athlete (I can’t tell you his name or sport because it would ruin him) … telling me that he was approached with the idea of improving his game by wearing a cage, and that I’d be able to give him some pointers on what it’s like to be locked up. I replied to him not to put the cage on, because KH isn’t kidding when he says there is no possibility of escape, that he’d never again know the pleasure of a woody or blowing off his spunk.  The reply I got was from KH, and it was simply this:

“Be careful what you wish for, because once you get it, you can’t give it back.” 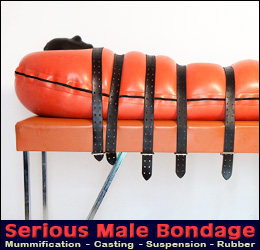 14 thoughts on “Be Careful What You Wish For”