Charlie hung there, from the overhead beam, his feet about 6 or 7 inches from the floor. The strain wasn’t too bad although, after this long, his arms and shoulders were beginning to feel it. First he had stripped. The big black guy had been meticulous with the bondage. Charlie’s wrists were both in high quality leather wrist suspension restraints that the guy had taken time over. There were no pinch points, each strap had been buckled, unbuckled, readjusted and finally hooked to the rings fixed to the underside of that ceiling beam. When he had finished all the preparations, he had Charlie stand on a box about 18 inches high so it wasn’t difficult or painful to stand there and let the guy fix his arms above his head.

Next to the box he initially stood on, on either side, were two small pillars a bit less than 10 inches high simply waiting for Charlie to reach out a foot, stand on them and release his arms from the building pressure his muscles were feeling. But there was a catch. He’d been told there would be, simply not what it was. Charlie had thought the test would be to see how long he could hang, the heat in the room making him sweat and increase his thirst, before using those two boxes he could easily reach. He wasn’t concentrating enough to think about the cold metal spiral butt plug which had been carefully screwed into his ass or why it was there apart from making him horny or the ring around his cock which was connected to it.

The black guy didn’t seem at all interested in his erection, well not after rubbing the head of Charlie’s dick clean of the precum that began to pool on the tip. And he supposed the ring around his balls that connected to the plug was to help it stay in place although nothing was getting that baby out of his hole unless it was unscrewed.

The guy had smiled before he left. He ran his fingers up and down Charlies chest, played lightly with his nipples and gently ran both hands round his back and into his ass crack where he pressed on the plug several times, just because.

He’d asked Charlie if he was ready to start the clock, to see if he could beat the time of the other boy who’d tried to beat the record. Charlie was, he’d been practising weights and doing all he knew to improve his arm muscles and stamina.

“Ok then” the big guy had replied. He put his hand into his pocket and brought out a black canvas bag hood, easily slipping it over Charlie’s head and pulling the neck cord enough to close off any light. He kicked the box out from under Charlie and let him swing. His last message was simply, “If you get tired stand on the boxes either side of you and the timer will stop.”

“So no catch then” thought Charlie as the door closed behind the guy, and he was left hanging.

Charlie reflected on the time he first got into conversation with the black guy. He had seen him in the bar several times, he thought he might at least have been a basketball player as he was well over 12 inches taller than Charlie. A few pleasantries lead, over a couple of weeks, to buying each other drinks. That’s when Charlie first got to know about the competition. As a keen video gamer he never wanted to be beaten at anything he thought he had a fighting chance of winning, Charlie had accepted the challenge which was simply to beat the standing record for hanging by the wrists with a couple of “surprise” elements to make the challenge more exciting. So, that evening he’d been escorted out of the bar round the back of the building, in a side door and down some steps to the room he now found himself in. Easy peasy he thought. He wondered what the prize was, or indeed if there actually was one, as he’d not thought to ask.

The time gradually passed, Charlie felt the sweat drip off the end of his nose as the temperature inside the bag went higher and breathing became a little less easy. He felt the trickles running down his body too, he wanted to scratch them like an itch but had to be content with feeling he was going to win whatever. After a while he heard the door open and then footsteps.

“How ya doin Charlie? I see the timer’s still running. Great! But now we’ll add something to the game.” Charlie felt his ankles being held and a cold metal shackle being tightened round each one in turn. “Ok boy, every 10 minutes I’m gonna add a little something to each leg, here’s the first.”

Charlie felt a weight being clipped onto the shackle. “It’s only 5 pounds. You’ll cope. The last contestant managed quite a few.”

In that case, thought Charlie, he was certainly going to manage.

After another 30 minutes he was feeling the strain. That was 15lbs on each leg now and his shoulders were telling him in no uncertain terms that they had had enough. But in the dark, sweating and having no idea of the time he’d been hanging there Charlie just “hung in”, a thought that amused him for a while. 20 minutes later he was beginning to think he should have won. 25 lbs on each leg was enough he thought. Surely he’d won. He waited but the next 10 minutes didn’t add anything to his leg. Nor did the next 10. “That’s it then, I know I’m in with a chance, there’re no more weights to come.”

The strain on his arms was becoming overwhelming. Each of his muscles and tendons first began to call out to him then, when he didn’t respond, began to scream at him. He was wet from the heat of the room and the interior of the bag was becoming more uncomfortable by the minute. The oxygen level, he thought, must be getting lower as his breathing became harsher and the CO2 inside the bag grew as he exhaled. He was beginning to need to pull in more air as his lungs demanded it and it simply wasn’t getting round the neck of the bag in large enough quantities. He opened his eyes, which made no practical difference to his vision, and found the salty sweat dribbling into them causing him to blink as they stung.

10 more minutes and he’d had enough. He strained at his legs, each with those ankle weights fixed to them and pulled them up far enough, he thought, to get his feet over the top of each of the small platforms. That’s when he found out about the catch.

He yelled as the shock of electricity hit his prostate and balls, more in surprise than outright pain and he felt the strain in his legs as they involuntarily kicked away from the top of the pillars. “Shit, shit, shit, the bloody catch. I forget the catch.” It took him several seconds to recover and realise that the shock had indeed been as much of a surprise as pain. Gently he lowered his left foot again. The pulsing started immediately, this time he realised it was giving his cock something to think about as it started to jerk around in time with the throbbing of the juice flowing through his ass. He lowered his right foot.

He screamed into the hot sweaty darkness that was all he could see and jerked his legs off the pillars again. “One foot good, two feet bad” that was the catch, he thought. He tried again, The throbbing pulse returned, coursing down his dick as though he was being wanked from the inside of his shaft. He took his left foot off and lowered the right one. Again the same feeling. After a few minutes he found he had to swap his feet over. Time went on, the times between swaps got shorter and shorter. His chest started to tighten as the wrenching pain reached from his arms into his shoulders and continued on south. He was gasping for air, getting dizzy from the lack of it.

The blackness changed to purple and then to orange as lights swirled in front of his eyes. He could see nothing, hear nothing apart from a sort of buzzing in his ears and feel nothing but the continuous wracking stretching of his limbs. All except his dick. It felt warm, wet and as if he was being given a very gentle blow job. The sensation grew. He came to, blinking into the black, he felt hands on his ass pulling him forward, his dick being swallowed and returned, over and over. His pain evaporated as the need to cum grew and grew. It must be the prize, he thought. I’ve won and this is the prize. He thrust his hips as much as his weighted legs and remaining energy would allow. And then it happened. He erupted, yelling and screaming as he felt both feet being pushed onto the boxes. The surge of power hit him just as he shot load after load. He felt the combined pain of the electricity being pumped into him through the butt plug with that of the sucking making him shoot. He strained and kicked out, just about pulling his feet clear realising that he was once again free to do so. Then he lost it again, swinging freely, no feeling, no sensation, just darkness.

As he opened his eyes he realised he was looking straight up at the ceiling. The restraints had gone, the box and both pillars had gone, his clothes were in a pile by his feet next to a large container of water. He crawled over to his jeans and sweatshirt. Tipped the water down his throat, coughed, spat and took another swig. Tying his laces he managed to stand. His arms shoulders and legs ached something rotten but he had to find out if he’d won. He slowly climbed the stairs, found the door open and walked hesitantlyy into the alleyway. It was dark, the bar was closed, there was no one around.

He leant against the wall, he just couldn’t figure anything out. He wasn’t the brightest but he was beginning to feel he’d been had. Either that or he’d won.

Metal would like to thank the author, Slavebladeboi, for this story! 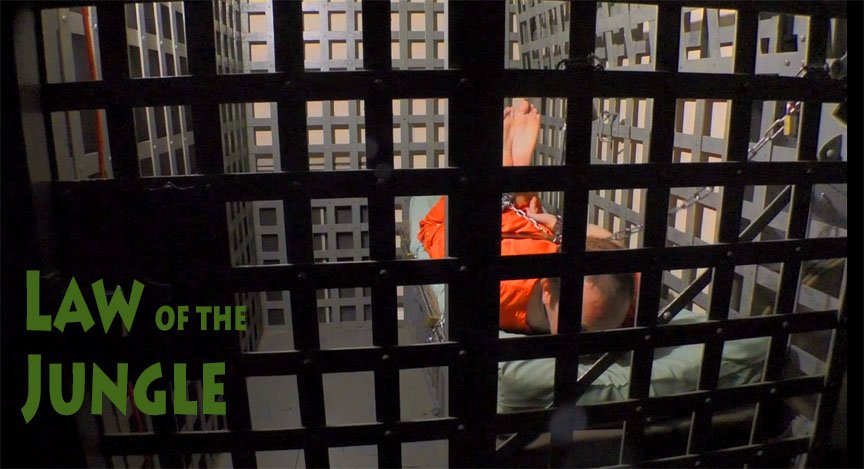