Stevie (from Chapter 1), now renamed “piss-slit,” is hanging from his wrists, as had shit-head before him.

Shit-head is back in its pod, now programmed on a 50-minute rest, 10-minute sprint cycle. This ensures the slave’s slumber is continually interrupted, keeping it sleep deprived and on edge at all times.

Piss-slit has just endured the same treatment as shit-head before him. There were several significant differences between piss-slit’s performance and that of shit-head. Firstly, piss-slit didn’t pass out when it orgasmed. It also took longer to break and now has a total of 21 pounds weighing its balls down. It was a low-hanger to start with, but the stretch is now an impressive 10 inches. It managed to piss itself three times and shit itself once during the ordeal, whereas shit-head stayed dry. No problem, because the factory area is designed for easy clean up.

No time to lose. I grab some 2-inch bondage tape and start wrapping its scrotum tight to maintain the stretch. Once the balls have no way of bouncing back, I untie all the steel weights and store them neatly, ready for the next slave. Leaving the one-pound donut ball stretcher in place, I give the slave’s blue balls a tap and they lazily swing between its legs looking like a babies arm wrapped in a bandage.

Its slave-cock looks red-raw and sticky after all the attention. During its hanging the cock grew to an impressively solid nine inches. This is a perfect match for the customer who ordered this blond bombshell. The softening pole of stickiness has deflated to about 6 inches, emphasising the tenderness of the mushroom head with the hood concertinaed behind the glans.

Releasing the slave’s ankles from the bungee cords, its legs drop weakly to the vertical, knees slightly bent. A press of a button lowers the slave to ground level, where it collapses into a seating position where I can easily manipulate its arms, and they’re quickly secured behind its back with standard leather wrist restraints and a padlock between the D-rings.

I fit a leather collar to its neck and secure it with a small padlock. The now completely compliant slave is manoeuvred easily to the side where a low padded bench, about 18 inches off the floor, 36 inches wide, and 6 inches front-to-back, is waiting for my unsuspecting trainee. The bench is bolted to the floor so it can’t move.

I push the slave down onto the bench and rope its legs, just below the knees, tight to each end of the bench so the butt cheeks are spread wide. Straps around the six inch padded beam secure the top of the thighs. The toes now just touch the floor and because the beam only supports the lower abdomen, the upper body slopes downward with the forehead nodding four inches above the concrete in front of the bench. I take a six-inch chain and padlock it between the wrist restraints and the collar, pulling the slaves hands hard up on its back.

Standing behind the immobilised straight jock, the exposed pink butthole is a tempting target, but I don’t want to go there — yet. Instead, I fancy a coffee so I meander to the kitchen for an hour to allow piss-slit to get used to its new position.

When I return, the corded muscles in the boys legs indicate they’ve been cramping for some time. The top half of its torso is bobbing up and down by about nine inches as abdomen and lower back muscles fight each other and try to adapt to the unaccustomed stress of this position.

I squat down, grab the head hair and pull the slave to the horizontal, staring menacingly into its eyes. “So … Now you start to learn.” I let go and the body drops out of sight.

I roll a small trolley holding a 17-inch monitor and laptop over to face the slave. The monitor displays simply “LAWS OF SPEECH.”

“Look at the screen.” Nothing happens.

A sharp swat with a wooden paddle across the butt cheeks produces a girlie yelp. Other than that, nothing happens.

The screen changes to display “SPEECH LAW NUMBER 1,” and after 30 seconds changes again to add:

“The slave will never speak unless spoken to by its Master or another superior.”

“Read it out load, slowly and clearly with no hesitation, and remember every word.”

Huskily a shaky voice says: “The slave will never speak until spoken to by its Master or another superior.”

A barrage of whacks with the paddle takes the slave by surprise and its arse instantly starts burning. “Wrong! You said ‘until’! The law states ‘unless.’ You will be word perfect — understand?” and another five swats forces the message home. The slave starts crying and lowers itself to relieve the strain.

I leave the slave to collect itself and again tell it: “Read it out load, slowly and clearly, and remember every word.”

The slave comes up and this time gets it word perfect. After reciting the law a further four times, the slave’s back is shaking and beads of sweat are appearing on the straining muscles. I tell it to rest and it sinks towards the floor once again.

A press of the down arrow button and the screen changes again.

“Enough rest. Up and recite the law correctly five times or you get another beating.” A single swat of the paddle spurs the slave into action. It raises its body and looks at the screen and hesitates.

Mumbling it starts: “The slave … will never speak unless … Umm …”

Thwack after painful thwack connect with the slaves tail. “What part of ‘clear with no hesitation’ do you not understand?”

After about fifty strokes of the paddle, Piss-slit finally got it right five times and sank panting to the floor, its muscles now so weak its forehead presses on the bare concrete.

Another press of the down arrow button and the screen changes again.

The slave’s back is now streaked with perspiration and its buttocks are red, blistered and quivering. A trickle of blood runs down passed the pink puckered hole and drips onto the scrotum binding, staining the grey material black.

“Ok piss-slit — you know the drill. We both want to get through this as painlessly as possible. Up now! ” Again, a single swipe.

It takes it many attempts, and 20 minutes of arm aching paddling before it completes the task to my satisfaction. Considering this was a university student, I seriously worry about the excellence of our education system.

Frustrated and tired of trying to drill such a simple sentences into this fuckless-wonder’s head, I leave it to dwell on its stupidity and stroll to the kitchen for another coffee.

Coming back, 45 minutes later, I approach the prostrate figure, pick up the paddle and slam it into the butt with all my strength. An earlier wound opens to leak bright red blood, which mixes with the darker red, dried previously. I reach over and turn off the monitor.

“Ok piss-slit. You’re on your own. You don’t need to look at the screen, there’s nothing there. Recite SPEECH LAW NUMBER 1 now!”

Fuck! It got it wrong on the first attempt. Thwack! Splat! Thud!

I let it calm down before sitting cross-legged on the floor in front of it and resting its head in my lap, stroking its head, tidying its hair. “You did well.” I lie, but now is a time for comforting not admonishment. It has to learn that I’m firm but fair. If it cooperates with me, its life will be, if not easier then, at least tolerable.

It cries into my lap, and when the tears finally run dry it actually says, “Thank you, Master,” totally unprompted. I feel a twang of pride, a desire to take the boy as my own, and my cock stirs in my jeans under the weight of the head cradled between my thighs. I realise the slave is sleeping and, so as not to disturb its slumber, I stay there for far too long. I suddenly come to my senses and I push its hair back and look at its angelic face and say, silently, to myself, “You will NOT fall in love with this one. You’ve already taken a deposit and the sales contract is signed. Get a grip!”

I stand, reach onto the trolley for the skin salve and coat the slave’s arse to help it heal. Untying it, I pick it up and lay it to rest inside its pod. I leave the pods floor motionless to allow the slave an extended rest. It will need all its strength for tomorrow when we’ll review today’s lesson, and also start learning SPEECH LAW NUMBER 2.

I punch the air as I walk back to tidy the factory area. God! I have a fucking awesome job. 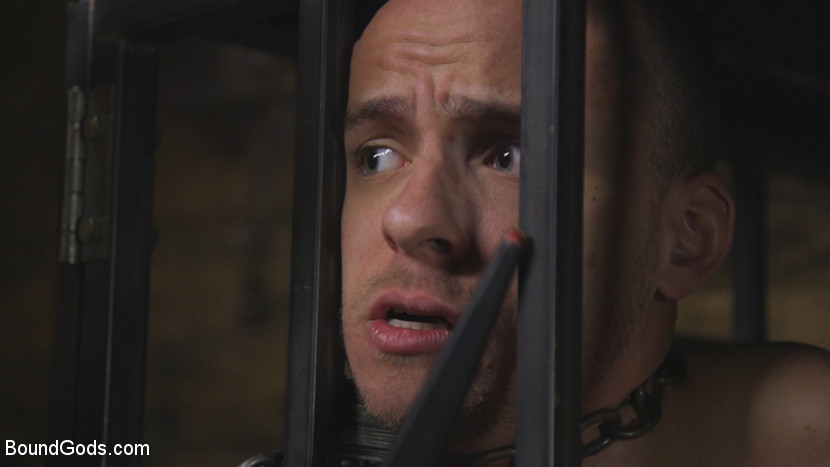 2 thoughts on “Chronicles of a Slave Trader – Chapter 04”