[[WARNING: This story — and the many chapters that precede it — feature descriptions of extreme elements that some readers might find objectionable. Continue reading at your own risk.]]

Training a sex slave typically takes six months or so. The first three months are spent breaking the subject down, removing all sense of self-worth, taking it to the edge of despair, to create a hollow shell, which can then be moulded into an obedient, compliant servant.

The second three months are spent fashioning the slave’s skill set to the potential owner’s requirements. As the clients vet their purchases, physically, before we even start phase one, when we’re ready to start sex training we can move forward with confidence knowing that the customer will happily accept the product upon completion. We can, therefore, immediately start tailoring the slave to the client’s sexual needs.

These needs are massively diverse, ranging from body modifications, castration, deep-throat training, arse-hole training, foreplay skills, fucking stamina, pain endurance, verbal skills, and so on, and on, and on.

In previous chapters, I’ve explained some of the training techniques employed during the first three months of a slave’s life at the centre. I guess I should also give some insight into how we train our stock sexually.

It probably sounds a tremendously appealing prospect, to train slaves in the sexual arts, and in some ways it is. But remember, we could easily have five to ten trainees at any one time. To bring each slave to the standard required, they need to be enduring some pretty intense sexual action for up to eight hours a day. Between myself, my two house slaves and my three trainers (one full time employed and 2 part time), it’s physically impossible to provide enough one-on-one attention to each slave.

So, it’s back to technology and, in some cases, letting the slaves train each other….

Darren, before he was captured, was a 19 year old, BMX bike enthusiast. Very active in sports, very handsome, square jaw, black hair and wicked smile. His naturally smooth torso was always displayed with pride in the streets. He had a happy-go-lucky attitude to life, balancing several girlfriends in a hectic social scene.

Joey, on the other hand was an academic. He was studying physics and chemistry in his fresher year at university, age 19, and showed great promise before he fell into the clutches of the Snatcher; my trusted procurer of male flesh.

They stand about two feet apart, looking into each other’s eyes. Between them is a solid steel vertical pole that protrudes from the floor. Its height is set exactly to match that of the prisoner’s chins. Securely mounted to the top of the post is a two foot cross bar that just reaches each of their necks. A solid steel collar, welded to each end of the cross bar, securely holds each captive in place; the collars locked with substantial padlocks.

Their hands are handcuffed high on their backs, connected to the back of their collars by short chains. Their feet are held apart by one-foot spreader bars with leather ankle cuffs. The spreader bars are centrally chained to eyelets set into the floor, so the slaves can’t rise from a flat-footed stance.

Each slave has a large ball gag stuffing its mouth, locked on with a small padlock. There’s as much, if not more, drool dripping from their mouths as there is juice oozing from their cocks. The saliva pools sexily on their chins, and runs off to collect on the cross bar of the bondage frame.

Two 8-inch brackets protrude from the vertical pole at crotch height, supporting two silicon, hand-held jack-off sleeves. The slave cocks pass through the sleeves, but each has been warned not to move. They know better than to disobey.

It’s time to explain the game to my victims…

The one for their arse is a special mix of thick water-based lube and itching powder. As they get fucked, their rings will become increasingly sensitive to the powder and within a short time any pleasure will turn to agony as they try to relieve the itching irritation. The more they get fucked, the more they’ll want relief and they’ll get desperate for the fucking to get more and more violent.

I let that piece of good news sink in for a few moments, and then I count down “Three…. Two…. One…. GO!”

Joey is first out of the stalls, galloping down the first straight like a slave possessed. He fucks that sleeve so hard, so fast and so deep, that its cock is a blur.

With Joey’s precum splattered hither and yon, Darren is taken completely by surprise. So much so that Joey has been thrusting his rigid pole into the sheath for a good minute before Darren even moves. The intensity of his fuck is such that it’s all his mind can concentrate on and, even now as consciousness returns and it decides it should start retaliating, the pathetic slave can only move about two inched into and out of the tight toy. It’s hardly enough for Joey to feel anything.

Joey’s breathing hard as I walk across to him. His tight tummy is inflating in and out in an attempt to force extra air into starving lungs. Veins in his neck have expanded and the steel collar is now tight, and his face flushes red.

Darren tentatively thrusts forward into the jack-sleeve. There was a whine from Joey as the massive cock slides firmly into his colon. Darren suddenly ‘gets it’ and starts plunging forcefully into the jacket wrapped around his fuck pole. Joey moans as the onslaught begins and sobs when he feels the heat and itch start to impregnate his bung-hole. As the pounding intensifies, the agony and ecstasy deepened in Joey’s shit-tube, radiating up through his abdomen until his mind edges towards insanity.

Eye contact between the two slaves is intense. It’s as if they are two gladiators sizing up their adversary, getting ready to strike at any provocation. But there’ll be no striking today, just a long exhausting climb to a very illusive climax. Both trying to beat the other to the top of the mountain, racing against hope, fearful that the other will get there first.

Forty five minutes into the ordeal and Joey suddenly freezes, rock still, eyes clamped shut. For an agonising two minutes his body is rigid and motionless. The only sound is of Darren’s exertion, and his proxy erection slurping in and out of Joey’s now very slack man-cunt.

Darren doesn’t have the common sense or strategic awareness to stop. He doesn’t realise that with every lunge he’s pushing Joey closer and closer to his goal. The eruption that Joey so desperately needs and which Darren should avoid giving his opponent at all costs, is painfully close and Joey just stands, stock-still waiting for the inevitable.

Suddenly Darren hits Joeys G-spot once too often and there’s a deep guttural groan that escapes around the ball gag. An irresistible dragging sensation begins in Joey’s balls and, as they constrict, he feels red hot lava insistently forcing through the tubes in his lower abdomen. The heat continues down to the base of his cock, where a wall of taut muscle impedes its progress.

Slowly, over what seem minutes, the pressure builds until the muscles crack and let the searing semen riffle the length of the slave’s tortured manhood.

Thick, pearlescent jizm blasts from the tip of the slaves cock, piss slit dilating to about half an inch. Half a pint of baby batter erupts from Joey’s shuddering throbber, and hits Darren squarely in the chest. The agonizing gush continues until Darren’s chest and stomach are caked in white, sticky spooge; a mark of his defeat.

Joey, having received not an ounce of pleasure throughout the whole ordeal, slumps in his bonds and loses consciousness. I release him from the bondage frame and carry him to his sleeping pod.

Minutes later, I return with Brendon, the next warrior to be pitched against Darren. 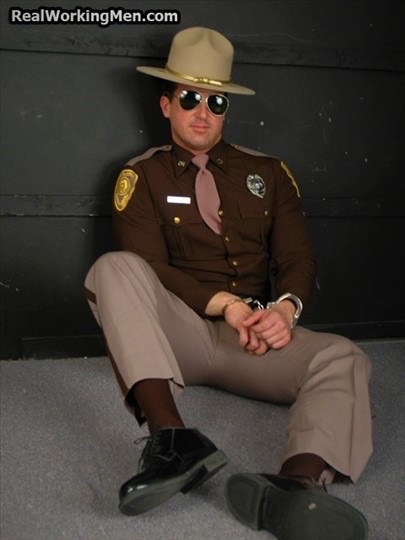 6 thoughts on “Chronicles of a Slave Trader – Chapter 17”