As the probes went to work entering both of the men, Pete went on to elaborate more on the center’s plans for them and what was happening, and most importantly, ABOUT to happen to them.

“Gentlemen,” Pete said, “By now your asses should becoming accustomed to the butt plugs.”

“It’s in there, but there’s no fucking way that I will ever get ‘accustomed’ to anything up my ass,” Mike said.

“Me neither,” added Todd.

“Oh, you will, boys, YOU WILL. I can see from the monitors that the catheters are fully deployed and in place,” Pete said.

“Impossible, aside from that thing moving around in the suit, I never felt it go any further than to the tip of my dick. And believe me, I would know if ANYTHING went up my dick,” Todd said.

“Mike, how about you? Did you feel anything?” Pete asked.

“No! Aside from this thing up my ass, you’ll never get anything in my dick,” Mike snarled at Pete.

“Oh, I guess your both in for a nice little surprise — seems our butt plugs are much more than just a simple plug. In a way, I’m glad you didn’t feel the catheter. Seems the butt plug, if properly inserted, can emit an ultrasonic wave that aligns itself with the base of your spinal cord, thus taking control over your nerves, muscle function and mobility. By not feeling the catheter, which can be quite painful, it only proves that we are proceeding according to plan,” Pete said.

“Damn,” was said in sync from both Todd and Mike.

“OK, now that I can be assured we are in ‘total control’ of your bodies, we can proceed. Shortly, I will have two of our drones come in and remove the fitting suits from you. I strongly advise you NOT to try anything. Our drones are basically men like you that our process was not totally successful on, it was necessary to ‘specially process’ them or kill them. Killing an otherwise perfectly healthy man does not make sense at this time,” Pete said.

As Pete finished his sentence, two men, incredibly well defined, muscular men, entered the room. These men were covered in a shiny, silver colored rubber. It appeared to be molded on their bodies, similar to the way the Sergeant’s suit fit, but theirs covered their entire bodies, hands, feet, neck, chin and part of their face. Only their eyes and nose remained visible.

“Remove them from the fitting suits and take them to the processing room when you are through,” Pete instructed them. Each man nodded to Pete as if to acknowledge him. At this point, Pete retrieved a CD from the computer and exited the room. The drones went to work on Mike and Todd. “What the hell are we gonna do, Mike?” asked Todd.

“Make a break for it when the opportunity arises,” Mike said. “Then, we’re gonna get the hell out of here, get your Sergeant and my Captain, strip those damn suits off them and report this place to the authorities,” he added.

“If they have infiltrated the police and fire departments, how far do you think they have gotten? It might be too late!” said Todd. “We’ll soon find out. But there’s no way I’m gonna end up like one of these guys. Look at them. It’s like they are not even human anymore. Whatever they did to the sergeant was pretty good, I would have never thought anything had happened to him, but these guys show the extreme of what they can do,” said Mike.

The drones started to strip the suits off the men. As the suits were removed, each man noticed that even though there was no suit on them, there were things left behind on them. First, there was a kind of modified jock strap, made out of rubber. This held the butt plug in place, and was connected to what they guessed was the “cup supporter.” Their cocks were tightly encased in a latex sheath and their balls were sealed in a latex sack. At this point, they realized that the catheters were indeed implanted in them.

The tube, which had a metallic color to it, was connected to a computer for each man. Upon examining their bodies, they each noticed that they were now hairless and had a super thin, almost clear film on their bodies everywhere the suit had come in contact with them. Pete noticed there was a ribbon cable hanging off of Mike.

“Buddy, I don’t mean to alarm you, but there is some kind of computer cable on the small of your back,” Todd said.

“Sorry to tell you, but you got one too,” Mike replied.

“FOLLOW THE DRONES,” was heard thru a loud speaker. It sounded like Pete’s voice. The drones disconnected the catheters from the computers and motioned to each man. Without any thought, each man’s legs began to walk in line behind each drone.

“Me neither,” Mike added.

They followed the men down the hall. They entered a room marked “Processing Room B.” Once in, they walked to the center of the room. At that point, the computer gave control over their limbs back to them.

“So you see now that your plans for escape are impossible. I really like this part of the procedure. Tuff, studly men are reduced to walking soldiers. You really should have realized that in a building as hi-tech as this, we would have monitors and microphones to record your conversations. You’re not the first, in fact, I’d say about every man in here has said something similar to what you two did. And, none have ever been able to go beyond the “talk” stage of their escape plan. Here, in this room, we will start the rubberization procedure. Take one last look at your bodies as you know them. The thin micro wires on your bodies will allow your new rubber skin to sense feelings of pleasure, pain and touch. Once completed, you will be fitted with a small processor in the small of your back. This will serve as a command box, as well as for something else we have planned for you later on,” Pete explained.

At this point, a device came from the ceiling and fitted itself to Mike’s head. It appeared similar to a military pilot’s helmet, complete with a headset and oxygen mask. It fitted itself to his head, then proceeded to lift Mike from the floor. He was carried a couple of feet over an opening. It quickly filled with a liquid rubber.

“Ha ha,” laughed Pete. “He’s not going to die, and neither will you when it’s your turn. The helmet has complete control over his respiratory functions and he is very relaxed right now. In fact, I’d say from the condition of his dick, he’s rather enjoying it.”

“What have you done to him? Mike’s the most heterosexual guy I know. There’s no way this could be enjoyable to him,” Todd said.

“You will find out Todd, your turn is coming up shortly. While we have a few minutes Todd, mind if I ask you a few questions? Just curiosity is all,” Pete said.

“When I went over your bios I mentioned the thing about Mike’s two ex-wives and your never having been married. There was one other thing I forgot to add. When you were at the watercraft dealer, while you were going thru the wetsuits on the rack, we detected deep sexual arousal, are we on to something here?” asked Pete.

“Very well, in time, in time. Just thought I would save you the torment of the final processing stage,” Pete said.

“Final stage, what does that involve?” asked Todd.

“Oh, that’s the best part, by the time you’re there, you’ll be doubting your own sexuality and your own past. It’s a great thing to see a once defiant men, so sure of their masculinity reduced to a rubber slave,” Pete said.

“You get some weird sick twisted pleasure from that? Do you? So what? So we can be stuck with jerks like you?” Todd exclaimed.

“Ha, you think I’m one of the people you’ll be serving? Ha! Are you wrong!” Pete said.

At this point, Pete removed his lab coat. Then he removed his tie and started unbuttoning his shirt. He turned around to face Todd.

As he did, Todd’s jaw dropped in shock.

This story is by M1, who granted permission for it to be posted here. You can find M1 at MaleBots, an online community with stories, pictures and videos involving sci-fi transformations. 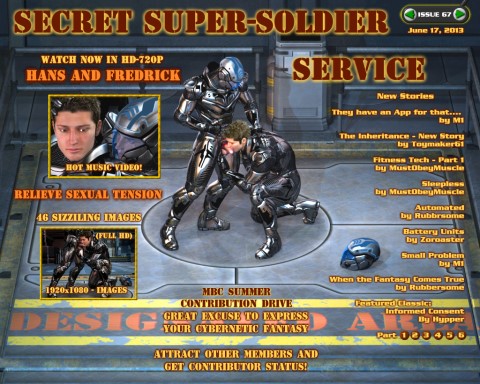