With the surprised look on Todd’s face, Pete asked, “I see you are surprised, if not shocked. As you can see, my complete body is sealed in rubber, from my neck to my toes, with the exception of my hands.”

“Why?” asked Todd. “How come you are part of whatever it is going on here?” he added.

“I too was an unwilling participant to this when I first arrived. I originally came here to apply for a job. Once I was here, the leaders of this organization ‘prepared’ me, as we have done to you and your friend. But, one thing was different. I had a secret fantasy about rubber and latex. I had never told anyone about it, and in fact, was a bit embarrassed about it. But once we got to this stage, I somehow felt no harm in admitting it. My body was coated with rubber like Mike’s is being done. But, a different computer program was used on me. Mike will be one incredible rubber slave when we are through with him,” Pete said.

“But you seem to be in control of your own actions and thoughts. I find it hard to believe that you aren’t one of the organizers of this place,” Todd said.

“One day, I may be rewarded with a upgrade in status and have a rubber slave of my very own. For now, my job is to do what needs to be done to satisfy our growing needs. I hate to think what might have become of me if I hadn’t admitted my true feelings,” added Pete.

As Pete moved around making adjustments on the control of the machinery that had Mike in its grasp, Todd couldn’t help but start to get aroused looking at Pete. His body was quite well defined. Although he was only 5-foot-10, every muscle group could be seen in a wonderful ripple under the skin of shiny black rubber.

“Well, it looks like Mike is coming along nicely, another three minutes in the liquid rubber and that stage shall be completed,” said Pete as he turned around to face Todd. “WELL, look at that,” Pete said, noticing Todd’s now-erect penis. “I’d say something has struck a chord with you here, Todd,” he added.

“Um, I guess you were right on some factors. I did enjoy looking at the wetsuits at the watercraft dealer. The great smell of rubber and to paw thru them was great. I know I have always had a tendency for some unusual things. But, in my line of work and circle of friends, I can hardly mention anything about it, let alone act on any of it. Now, seeing you with you incredible body covered in rubber, and with the way the sergeant looked back at the river, I guess it’s all too much for me to deny anymore,” confessed Todd.

“Good,” exclaimed Pete. With that, he picked up a phone on the console and called someone. Todd could overhear him saying something about a man with potential and he would need one of the Supervisors to decide the fate of this man. At this point, Mike was being lifted out of the vat of liquid rubber. His arms out to his sides slightly and his legs spread, he remained motionless as the machine maneuvered him to a small elevated pedestal in the room. The same machine that lifted him up now placed him down. But, in doing so, it left the helmet fitted to his head while it moved away. Todd looked over to Mike in amazement. He knew his friend worked out regularly and maybe used some things to aid in his muscle building, but something about the rubber on his massive form made him look hotter than Todd had ever thought he was.

“I see your friend has processed through the second stage successfully. He does have one incredible body too. Perfect abs, perfect glutes, well-defined pecs. He will be easy to place with someone looking for his type.”

At this point, one of the drones returned. He went behind Mike and hooked him up to a computer from the ribbon cable on his back.

“What is that for and how come he still has the helmet on?” asked Todd.

“I suppose there is no harm in letting you in on the next phase. He is now about to undergo the final conditioning. With the computer hooked up to the cable that was attached earlier, we can send stimuli to any desired area of the body, producing a desired response. The helmet is also an integral part of this final phase. Mike is being inundated with a sound and visual program. In a way, his mind is being re-patterned and things that he never would have thought of doing, will now come as second nature to him. He will also enjoy all things that come from this now,” Pete explained.

At this point, one of the Supervisors entered the room. He was a tall man, 6-foot-5 and obviously a serious body builder. He wore only a rubber pair of shorts and a rubber tank top.

“Peter, is this the man you feel demonstrates potential?” said the Supervisor.

“Ah, good call,” said the Supervisor. “You, Todd I believe your name is, I have reviewed all the transcripts and played your ‘confession’ about you desire of rubber.”

Todd’s face turned red with embarrassment, forgetting about the hidden video and audio that he knew was in this place.

“Don’t be embarrassed, our organization is built on men just like yourself. No need for shame here,” the Supervisor added.

“Whew! That was easier to admit than I thought,” said Todd.

“I am referred to as Tony, you may call me that for now. Peter here will proceed with the needed preparations for you, but, take my word for it, and that of the rest of the supervisors here, you will not end up like your friend Mike there. You will be even better!” Tony said.

With that said, he shook Todd’s hand with a firm grip and headed out of the room. Peter now instructed Todd to stand where Mike had originally been when the machine picked him up. Todd stood there and he too had a helmet encased on his head, then was lifted up and placed in the liquid rubber,

Metal would like to thank M1 for this story, which is posted here with is permission. You can find M1 at MaleBots, a site dedicated to men who are interested in sci-fi transformations. 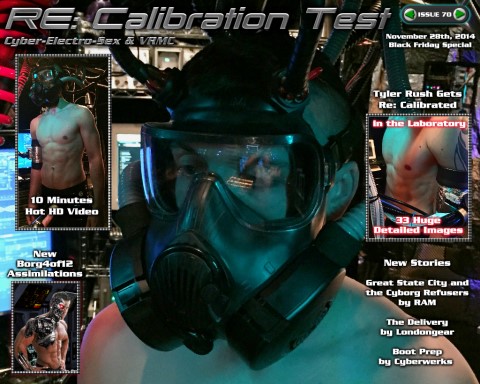