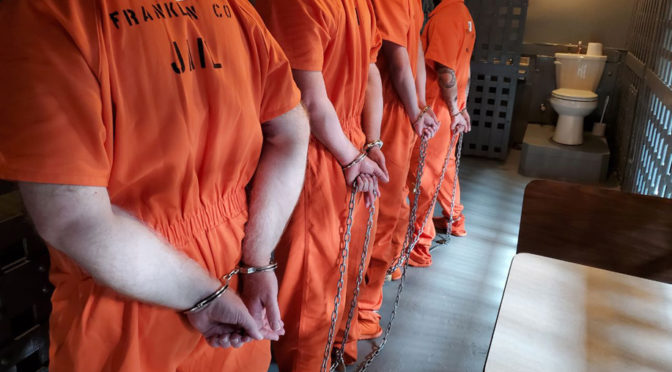 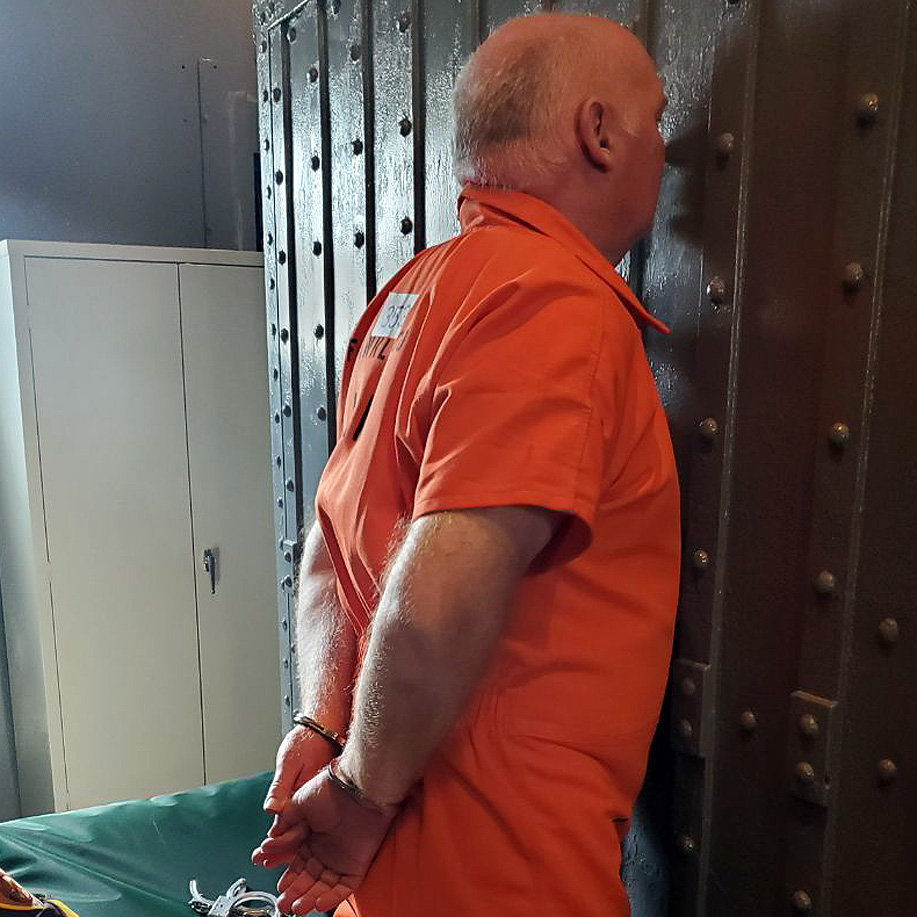 I was in jail.

My guess it was between 3 and 4 in the morning. There is a courthouse nearby with an old-fashioned clock that sounded the hour, but I didn’t I remember hearing the bell.

I had finished pissing as quietly as I could in our cell’s piss bucket. I adjusted my orange boxers and snapped up the bottom snaps of my orange jumpsuit. I gingerly shuffled to my bunk. All prisoners wore leg irons, even at night and they could make a racket. I didn’t want to wake my cellmate. We had been moved around the three available cells during our stay, so we had different cellmates, or were alone in solitary. Tonight, my cellmate was Ryan. Ryan is a well-built North Carolina guy a bit over six feet tall. He had half of a thin gray blanket over him from the waist up. It was the start of a hot July, but our cell was exposed to the full blast of the cellblock air conditioner. We both slept in our orange jumpsuits.

I never did find out, or risked it, if we could pull our jumpsuits down to our leg irons and sleep in just our boxers. I probably wouldn’t be worth the effort. We had to be up and fully dressed for morning headcount; for any headcount really. He had been snoring on and off since lights out. I snore too and told Ryan to give me a shove from his bunk across the cell to stop me snoring. He was only 3 feet away.

I started planning to go to Franklin County Historic Jail the moment I found out about it. I was able to hook up with some like-minded guys, some who had been before. During Mid Atlantic Leather we got plans firmed up, and by July we were ready to go. The logistical part of going was done through the jail’s website and PayPal. I didn’t have to bring anything besides meds I’d need. Everything else would be provided for my stay. Our group went to jail as a group of four. We were all charged with separate crimes.

The exact order of events has kind of blurred together. The stay at the jail was one of the best things I’ve done in my 59 years. Rather than go though and try to relate things in the order they happened, I’m going to go through some topics of my stay.

I’m going to start with my favorite part of my jail experience, process.

In jail there are a lot of processes, from the arrest and courtroom appearance, to in-processing, and the daily routine process. What jail is, is a series of processes interrupted by the unexpected.

I was involved in a “bad cop” scenario. I was arrested in front of a judge. My charges were introducing contraband to the jail and distributing drugs. I was denied bail and was ordered held. I was led away in handcuffs for in-processing. 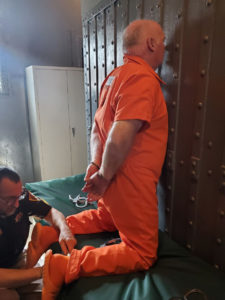 I had to sign consent papers for my stay. I had a plastic storage tub. I had to empty my pockets. My wallet, keys and a few personal items were cataloged. My pills I needed were taken, and I explained when I needed to take them. Clothes came next, then shoes and underwear. I was taken to the shower area. I got sprayed down with a “delousing agent” from a garden sprayer. It didn’t sting, I was worried about that. I had to run fingers through my hair, open mouth and run my finger around the inside of my mouth. I had to lift my tongue. I got checked under the arms, wiggle my fingers, wiggle my toes, and got checked out under the arms. Then came that part that everyone dreads. I had to bend over and spread my ass cheeks then squat and cough. The shower area was behind a locked heavy metal grid door. I had to walk in, put my hands on my head and wait for the guards to lock the shower door. I was the first inmate taking a shower, and the water did not warm up. I dumped the liquid soap on me and jumped in and out of the stream of cold water. I took me about two minutes to shower. I had a towel that I had to use quickly to dry off with, as there were three other inmates to process.

I was in my issued orange boxers, orange socks, orange slip-on sandals and an orange jumpsuit. My number was stenciled on a white tape above the pocket on the left front and on the back between my shoulders. I was No. 35374. I had to put my hands through a slot in the metal grid shower and was handcuffed with my hands behind my back. I got led out of the shower area. There was a low bench with a pad I had to kneel on it. I got a set of leg shackles put on me. With my leg shackle chain rattling I was taken to the cellblock. The cellblock is basically a big metal box divided into three cells and a narrow dayroom area. Outside this box was the brick walls of the building. I was stopped in front of a heavy metal bar door with a heavy metal handle.

It was explained to me that I had four rights. The right to shelter, my cell. The right to clothing, my issued jumpsuit. The right to food, what was given to me. The right to medical attention, when the guards thought it necessary. I was told to step into the cell block. I had to stand up against the wall with the doors to the cells. The rule was toes and nose against the wall. I was instructed to put my hands through a slot so I could have my handcuffs taken of. I was ordered to open the door to cell No. 1 and close it behind me. Once in the cell I had to go the back of the cell with my hands on my head and my legs spread. Leg shackle chains were not to touch the floor when in that position.

In the morning the lights would come on with some appropriate music, usually Johnny Cash or Elvis Presley. Corrections Officer Pitbull would come into the cellblock and scream at the top of his lungs, “INMATES!”

This was the start of the morning process. During the wake-up music I got out of my bunk and made sure my jumpsuit was all snapped up. I made my cot up and made sure the water pitcher was centered on the back shelf. We all did the same thing. After getting ourselves and our cells straightened out, we got into position, hands on top of our heads, leads spread so the leg shackle chain did not touch the cell floor. We would sound off for head count. Cell No. 1 would start. When it got to me it was, “SIR, 35374, SIR!”

When the cell doors were opened, we had to empty our piss bucket in the dayroom toilet if we used it, rinse it out and spray it with 409. You NEVER emptied your piss bucket in the sink in the day room! The morning routine would continue with washing up, normally just a face wash and brushing our teeth. We then had to line up for breakfast. Lowest number went first. We went to the same slot in the metal bars making up the front dayroom wall where we got cuffed or uncuffed. The food tray got handed over from a CO. After breakfast we had to clean up our cells and dayroom. Only the inmates assigned to a cell were allowed in that cell. Only the inmate assigned to a bed was allowed on that bed and generally that half of the cell. We had to sweep the floor, clean the sink, clean the day room toilet and pick up any trash. After this the day would start off. Sometimes there was Court or a work detail. Other times something would happen and one of us, or all would end up in punishment. The rest of the schedule would be centered around lunch and dinner. Toward the end of the night if we behaved, we’d get a movie, could play cards, or do a board game. The nighttime routine involved washing up again, getting water for the night, and any medications we needed. With a little grousing and complaining we would get into our cells. Once inside our cell it would be into the position, hands on head, legs spread so the leg shackle chain did not touch the cell floor. Then we’d sound off with our numbers and it would be lights out. After lights out it was possible to talk quietly with my cellmate. We’d talk about the day, the food, our fellow inmates and the guards. We’d keep a listen out for any patrolling COs. That was the process we went through.

At night there was a pattern on the cell’s wall. Little squares of light from the outside streetlights from the vertical and horizontal bars. I felt the same feeling I did with my fire team during the Gulf War. It’s strange to say, but with the cell doors locked with the inner and outer doors slammed and locked shut I never felt safer.

The Franklin County Jail and Sheriff’s house in Hampton, Iowa, is listed as a National Historic Landmark. It was built in 1880 in the Italianate architectural style. This was the most popular Victorian era style in the United States between 1860 and 1890. The building and cells were built by J. Pauly and Brothers. The design of the cell block is an excellent historical example of the first lever locking mechanism for closing multiple cells, an innovation that J. Pauly patented in 1874. The Jail was in use for 108 years. Criminals of every kind were incarcerated in the jail until it closed in 1988.

The Jail is the only place in the world where selected guests can visit and find out firsthand what being in jail would have been like during the years that this facility was in operation. They can be the inmate in a jail role playing experience where they will step back into time … fifty or more years ago.

The jail is also available as an Airbnb, for ghost hunters to study, and for film and television projects.

Metal would like to thank Johnny Utah for sharing this experience.

One thought on “My Stay at Franklin County Historic Jail”