“Walk to the middle and face me.”

He was watching me take it all in. I knew he could see my mouth hanging open and cock twitching. I walked toward the middle of the room, where there was a yellow circle with a drain in the middle the size of a manhole cover. I stood on it and faced the man.

“How do you wanna start?”

I was silent. I didn’t know if I was supposed to answer. Even if I were, I had no idea what to say.

“Want some paddling? Some whip action maybe? It is getting late, maybe you just want to sleep. When was the last time you peed?”

It had been a long time, but he didn’t wait for an answer. Instead, he walked over to the back wall and picked up wrist restraints for suspension. He proceeded to put them on me, padlocked them, then produced an industrial remote out of his pocket, which he used to lower some chains from a winch. Soon, my hands were lifted above my head. Jack came back with spreader bars both for my hands and my feet. Now I was spread eagled and, a few seconds of winching later, on my tiptoes. I never guessed how painful this position was. It was pretty standard in porn, so I expected more of a discomfort after some time, nothing immediate. My shoulders were stretched and toes extended beyond regular. I was moaning silently and rocking back and forth. I knew I had to take it but for how long?

Jack went around and hugged me from behind. His body was warm and firm. He grabbed my balls and squeezed them a little, carefully avoiding my cock. His hands moved around my nipples, lightly twisting them. Without a warning he clipped on a clamp and then another. I jumped a bit but he was still hugging me. The pain was familiar as I had used pins on my nipples before, although this time I couldn’t take them off when they were too much. While I was still concentrated on the clamps, Jack started kissing the back of my neck. I instinctively threw my head back, trying to intensify the sensation. I had goosebumps all over. My feet were trembling as they were getting tired. He moved his lips down, kissing all the way to the small of my back. His hands moved over my cheeks, sometimes slipping into the crack. I was getting edged without even anyone touching my cock.

He started rubbing my crack, zoning in on my asshole. Moving in circles, his fingers started pushing at my puckered hole. He used his spit to ease the way in. I could feel his knuckles going past the sphincter. It was a novel sensation, one that I welcomed with open arms. Then, I felt something a bit larger, bit firmer and a bit colder. This one didn’t have knuckles, it just went straight in my ass. Suddenly, he took his hands off.

“That’s a laxative. Hold it in for 15 minutes.” I hated suppositories as a child. I sure as hell wouldn’t like them now. Jack left the room. My toes were sizzling. I had tried shifting my weight, but every time I did, the pain would start all over again so now I stood perfectly still. I could hear my tummy rumbling and feel the spasms. Ten minutes passed and my moans got louder. I couldn’t hold it in any longer but had no intention of shitting in this position. I was sweating like crazy when Jack came over with a bucket. I emptied my bowels.

“Surprised you could hold it in that long. Now let’s clean you up.” He went and got a garden hose. The water was cold and the spray was strong. I squeaked as he brushed me all over, cleaning away the mud in every nook and cranny. He hadn’t been gentle and when he was done, my skin was all red. I was very cold now, my teeth were chattering. He went away and came back rolling a space heater. The warmth was immediate.

“Here’s a baby monitor. The safeword is ‘purple,’ you say that and I’ll come running. Other than that, shout all you want. Nobody will hear. Try to get some sleep.”

Metal would like to thank the author, Hotch Rider, for this story! 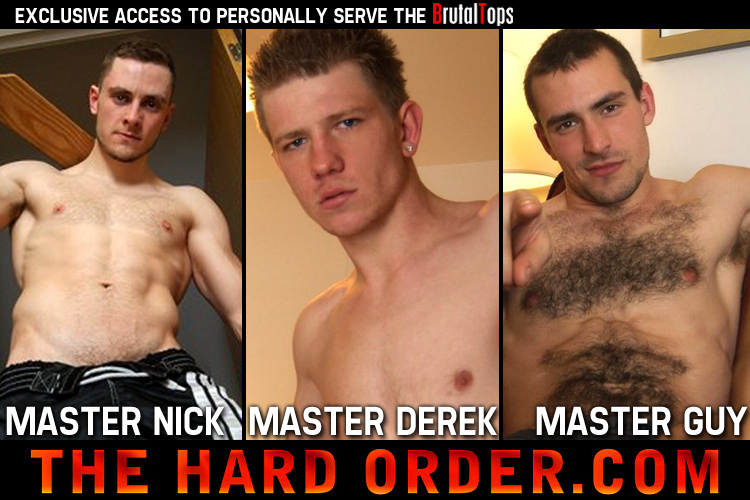