A quaint bell rang as Ted opened the door to The Leather Store. The store sure lives up to its name, he thought as he breathed in the familiar smell of animal hides. Walking up and down the aisles, Ted saw leather garments of every type: jackets, pants, chaps, jockstraps, you name it. No sex toys in sight so far, however.

“Can I help you?” The quiet voice startled Ted, and he turned to see an average-looking man with horn-rimmed glasses and a shaved head. “Are you Bill?” Ted asked tentatively. “Ah, you must be Ted. Follow me please.” Bill led the way down a wrought iron spiral staircase so narrow Ted’s shoulders rubbed the metal support bars as he descended into the basement of the shop. Once his eyes adjusted to the dim lighting, Ted gasped in amazement at the array of whips, floggers, collars, hoods and other objects that defied definition.

Bill snapped him back to reality with a command: “STRIP!” Ted was shocked at the sudden change in Bill’s demeanor. Despite his exhaustion from lack of sleep the previous night, he knew that if he didn’t obey Bill there would be consequences. He didn’t want to spend another night with the Ring delivering pain to his balls, so he reluctantly began to take off his clothes for the shopkeeper. Bill smirked as he watched Ted pull off his jeans to reveal basic white briefs. Then with a quick tug, Ted was naked before this stranger, instinctively covering his genitals with his hands.

“HANDS. AT. SIDES.” Ted immediately dropped his arms to his sides, Ted stood more or less at attention as his semi-erect cock bobbed in the air. Bill walked around Ted’s naked form, not touching, but closely inspecting him nonetheless. Bill had Ted stand on a platform in the center of the room; it was almost like a stage. Suddenly Bill grabbed one of Ted’s wrists and pulled it back. CLICK, CLICK. Ted was astounded at the speed and strength the smaller man displayed as he handcuffed Ted’s wrists behind his back. Ted began to protest — after all, he’d only just met this guy — but Bill quickly shoved a penis gag in his mouth and strapped it behind Ted’s head. As Ted choked and struggled to adjust to this intrusion in his mouth, he felt a heavy chain being attached to the cuffs. He heard a mechanical whirr as the chain began slowly to rise, pulling Ted’s arms up along with it. Ted bent over, trying to relieve the pain to his shoulders when the winch finally stopped. Ted cursed Bill, but it came out a muffled “UH UH FUCK OO DOON A MEE OO FCKN ASTAD?!!” Bill’s reaction was swift, and Ted immediately regretted his outburst, unintelligible as it was. The pain to Ted’s balls was intense as Bill landed a precisely aimed kick with his steel-toed boots. This was too much for him, and Ted began for the first time (but not the last) to question his decision to put on the ring. Ted began to cry.

Showing not an ounce of sympathy for his subject, Bill kicked Ted’s legs apart and secured ankle restraints and a spreader bar, effectively forcing Ted into a painful and compromising position, with his ass up in the air. He chuckled at Ted’s whimpers as he began to rub his asshole with a lubricated finger. Next thing Ted felt was cold metal as Bill slowly inserted an anal hook into Ted’s tight rectum. He then hooked it to a chain dangling from the ceiling, tightly enough to force Ted into yet more discomfort. Next came Ted’s poor aching balls. Using a leather parachute and chain, Bill secured Ted’s nuts to an eyehook in the middle of the small stage. As a final touch, BIll secured clamps to Ted’s meaty nipples, and secured the end of the chain between them to another hook in the floor. He then stepped back to admire his work. No matter which way Ted moved, he would be delivering pain and stress to a different sensitive body part.

Bill smiled. “It’s called predicament bondage. How much pain you receive is entirely up to you, Ted. It’s said that if the subject remains perfectly still, he will experience the least amount of pain. Let’s see how long you can hold a steady position.” Bill laughed as he shut the lights and ascended the spiral stairs, leaving Ted helpless in the dark.

Of course, Ted soon found it impossible to remain perfectly still. But no matter which way he shifted his weight, it brought excruciating pain to one of his most sensitive parts. And the pain to his shoulders was constant, growing worse by the minute. How the fuck did I let myself get to this point? he thought miserably. Yet Ted’s cock seemed to think otherwise, as it bobbed up and down in the air, ecstatic in its erect state.

After what seemed like hours, Ted blinked as bright lights suddenly turned on. It seemed they were all directed at him, as he could not see past the light to the room beyond. “Ah, how is tonight’s model holding up?” Ted’s mind raced. Model? What the fuck? He struggled, causing more pain, but the bright lights prevented him from seeing what Bill was doing. He heard metal scraping, chairs being moved around he thought. What is going on? Then it stopped, and darkness returned as Bill went back upstairs. Ted tried to find a comfortable position, but it was completely impossible. The worst was the tit clamps. They dug in relentlessly even when Ted was still, but if he moved so much as an inch, the torture was unbearable.

The lights came on again, and this time Ted heard the sound of many feet descending the stairs. Movement, chairs shifting, murmured comments about Ted’s body. They are talking about MY ass! Ted realized. Despite his circumstances, Ted’s erection got a bit harder at the thought of strangers commenting on his naked form. “Good evening gentlemen!” boomed Bill. The group of men became silent as they listened. “Tonight’s demonstration is about Predicament Bondage. Our subject (here Ted felt Bill tap his ass with a leather crop) has been in this position for two hours now. Our discussion will be about delivery of pain, and the subject’s ability to shift the pain from one part of his body to another. As usual you will be able to get a closer look at the subject, but no touching — for now at least! (laughter) and now, let’s get started, shall we?”

Metal would like to thank Hard Slave for this story! 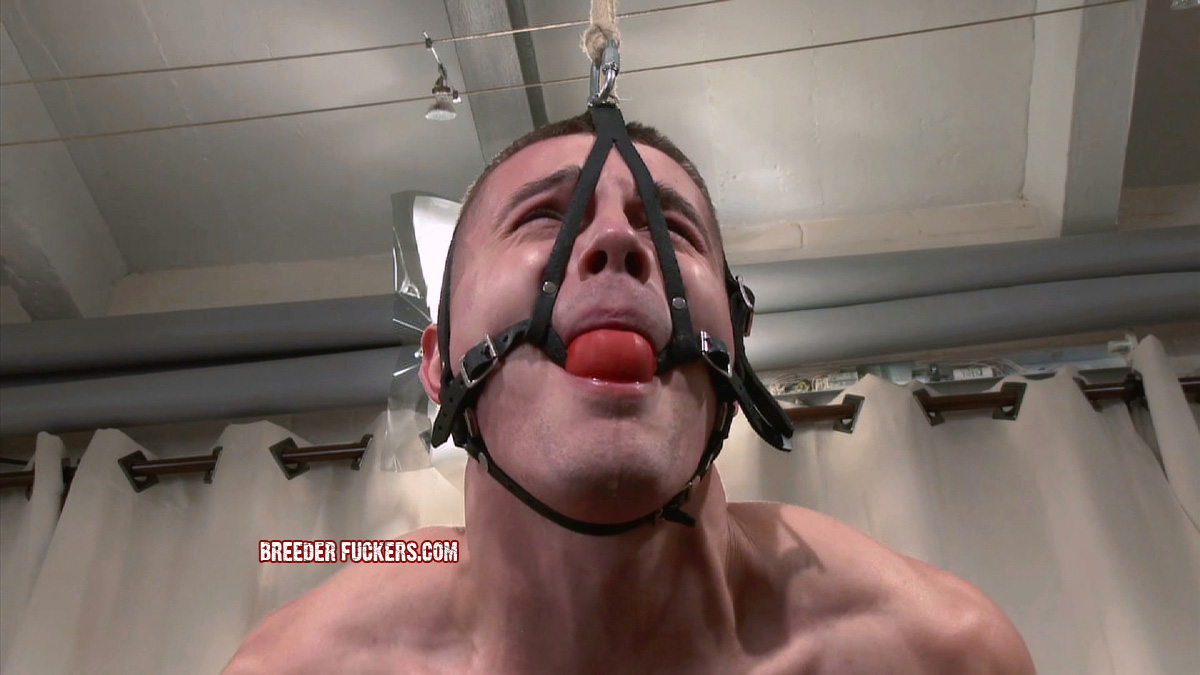