“You’re going to be locked in here,” Roger says, slowly stroking my cock as he looks into my eyes, “while I sleep in your bed, with your husband. But first he’s going to fuck me. Then I’m going to fall asleep in your husband’s arms and you’re still going to locked in here, helpless and miserable, because your sadistic husband allows his sadistic boyfriend to do this to you. He lets me put you away like this, lock you up like this, you pathetic fuck.”

That’s usually what Roger says — or something close to it — before he snaps the blindfold to the hood. I’m already gagged, laced tight in a sleepsack, and strapped down to the bondage board in the playroom my husband and I built a few years before we met Roger.

Roger will sit there for another minute or two after I’m blindfolded, stroking my cock, until I’m about to come, and then he’ll stop. That’s one of Roger’s Rules: I’m not allowed to come when he’s in the house. And he’s in the house a lot these days. He’ll sometimes set a pair of his underwear, sweaty from the gym, over my face before he leaves, so I can smell him while my husband fucks him. Then I hear him walk away and close the door and lock one of its two deadbolt locks. A moment later I hear the other deadbolt click. Roger installed both locks on the door; our playroom door didn’t have a lock before Roger came along. Roger has a key to one of the deadbolts, my husband has a key to the other. The second lock click means my husband walked up to the door, knowing I was already strapped down, gagged, and blindfolded, and turned his key — without opening the door, without checking on me, without asking me if I’m okay.

Two locks, two keys: that way I don’t get out until they both want me out.

Roger used to put in earbuds before he hooded me. He would set some loud trance dance music on repeat before he left. That way I couldn’t hear anything—he thought he was being mean. I told Roger, one night when just he and I out went out for a drink and a “check-in” talk, that the music actually made it a little easier on me. It made me space out and float away, even fall sleep. It was far more torturous to be able to hear them … well, not quite fuck. I couldn’t hear that. But I could hear them walk around, walk past the door to the playroom, one or the other or both of them, on their way to the bathroom to shower, or down to the kitchen to get something to eat after sex. I could hear them talking, sometimes laughing, without being able to make out what they were saying. And every time I heard one of them walk by the double-locked door I would start to get my hopes up—maybe they were coming to let me out. Better not to hear them walking around at all than to hear them get closer, start to get my hopes up, and then be crushed when I didn’t hear the door open. Better to have music.

There hasn’t been music — not once – since the night I stupidly admitted to Roger that the music made it all a little easier on me.

Last time I was in the tied up in playroom — last night when I was tied up in the playroom — the locks turned, one right after the other, and then I heard Roger and my husband walk into the playroom. I could hear them kissing. Then someone took my cock out and began to stroke it. I exhaled, pushed against the restraints, and moaned. My bound-body language was clear: I wanted out. Then I heard Roger’s voice: “Nope, not now. You’re not getting out yet, you’re not getting off yet. We’ll be back for you in the morning, you sick fuck.”

They were stroking my cock so they could put an external catheter on me — a condom with some adhesive at the base and a tube running out of it. I wasn’t getting out — this one would be an all-nighter — but they didn’t want me to piss all over myself and ruin the new sleepsack. When I started to moan, clearly unhappy, Roger asked if I was in pain. Was anything numb? Was I uncomfortable?

No, I grunted. I just wanted out.

“Shut up, you sick fuck,” Roger said, “You love this. You can kneel between your husband’s legs and beat off about it tomorrow. But any more complaints, any moaning and groaning, any bullshit grunting that makes us get out of bed and come in here, and I’ll make you drink your stale piss in the morning before I let you out.”

Then they left, double-locking the door again.

My husband and I have been together for 12 years. I’m 40, he’s 35. (We’re Canadian, so we’re legally married.) I’ve always been into bondage. My husband, however, was completely vanilla when we met. At first I topped him. But pretty soon it became obvious that he preferred being the bondage top. And he was really good at it. Bondage tapped into two personality traits of his that had complicated both of his previous (and brief) relationships: he’s pretty selfish sexually (he likes to be serviced) and he likes to have a lot of “alone time.” After he realized that bondage gave him all the “alone time” he wanted, he started tying me up. A lot. It wasn’t always sexual for him — sometimes he just wanted to be alone so he could read, or listen to music, or paint without having to make small talk or feel bad for not wanting to make small talk.

That’s when we made our spare bedroom into a playroom.

Whenever my husband wanted to be alone after the playroom was built, he would pull me inside or tell me to go there and wait for him. Then he’d tie me up and leave. When he wanted to get off, he’d come in, take the gag out, fuck my face until he blew a load, then gag me again, before going back to whatever he was doing. Sometimes he would jerk me off while I was tied up but he usually preferred to untie me and either have me fuck him or have me kneel between his legs and beat off as he sat on the edge of the cage and talked dirty to me.

We worked up to storage sessions that lasted four hours, but that was my limit. (And, yes, we know you’re not supposed to leave a tied up person alone, but he was always around when I was stored, and he would check on me, and he got—no shit—a baby monitor for our storeroom, and we had a “grunt pattern” safeword that signaled distress.)

But four hours was the max I could take. Until Roger came along.

To be continued tomorrow … 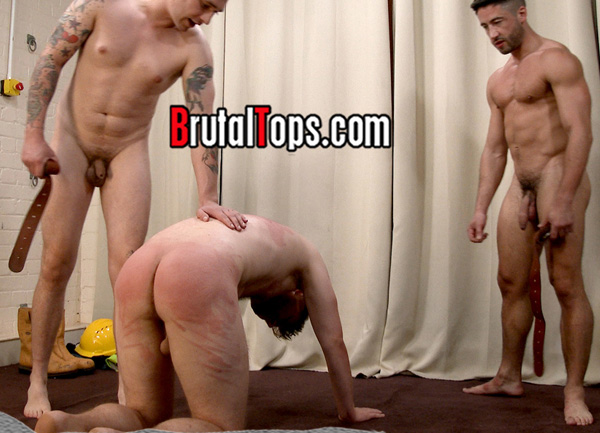