The slave turned over on the floor, pulling the thick blanket close against the chill at the foot of the Captain’s bed. He was trying to get his sleep-addled brain around what was happening.

The Captain had jumped out of bed suddenly, quickly as a cat, and was now standing in the open door listening intently and scanning the midnight darkness of the Bear Trap Ranch. A silvery light outlined the edge of the canyon high above and was moving along slowly, dropping down toward the camp. A low engine rumble could barely be heard over the chorus of crickets and cicadas in the chill air. A truck was making its way along the road above. Intruder!

Even as the slave tried to rub the sleep from his bleary eyes, the Captain had already pulled on his dirty Carhartt pants, scuffed boots, and slipped a wrinkled tee over his head. His handgun was out and strapped to his leg in a quick movement. He slipped out of the door and through the camp gate, disappearing into the trees, his movements marked only by the flicker of his flashlight.

The rumble of the truck engine came closer and closer and the slave was now crouching breathless behind the glass, knowing the truck was coming this way!

The headlights lit a cluster of grey manzanita at the edge of the camp and barely missed the Captain dodging into the brush. The truck stopped abruptly, just a few hundred yards away, dust kicked up into the beams of white light. The slave’s eyes were clued to the spot of light and his heart pounded. Behind the glass he could not hear anything but the rumble of the engine. Minutes ticked by and nothing happened. Did a shadow flick across the road? Was someone coming? Where was the Captain?

Ben began to think about the humiliation of being discovered in his naked and chained state for the first time. The outside world seemed suddenly not so far away as it had for the last month of hard work and training. 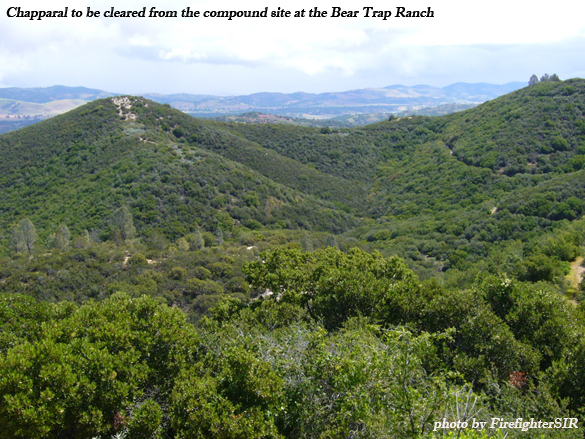 Time ticked by very slowly and the slave began to cramp in his crouched position, but still there were no sounds or signs of movement. The clock read 12:32, 20 minutes since the Captain had left. Then suddenly, the truck began to move, pulling forward, turning, and disappearing up the hill road towards the new compound site.

Had the Captain warned off the intruder? Or had he been overpowered and dragged off by the group of drunken, trespassing soldiers that he had warned off the property the day before? Were they enacting some revenge on Him right now, overwhelming him with their young, strong, battle-ready bodies?

Each irrational thought in the slave’s mind was followed by another, more wild idea. Without the Captain to order him, the slave was suddenly totally alone after a month of constant contact with his Master. The slave was chained to the base of the bed. How would it get way? The slave crouched over the eyehook in the floor, pulling on the chain, trying to unscrew the hook. The slave began to sweat and shake, how long had it already been? What was that noise? Were the soldiers coming back?

The slave managed to turn the hook a bit and felt a rush of hope. Ben wrapped the chain around the hook to get a grip and strained to turn it again. The hook was moving! Cold sweat covered his naked back.

It must have been an hour at least before the slave managed to turn and yank at the hook enough to pull it out of the floor leaving a torn hole in the wood. The slave’s desperate escape now seeming a reality, he grabbed a pair of the Captain’s boots and a fresh pressed uniform hanging by the door. The slave stumbled out into the yard, gathering up the long chain around his neck in his arms. Ben paused, panting, trying to collect his thoughts.

He needed to get the collar off right now.

Tool shed! The slave whipped around to the back of the cabin, tripping over shovels and picks resting along the wall. The shed door was unlocked but the slave realized he had no way of seeing the tools in the dark. He dropped the boots and uniform in the dirt and ran back to the cabin. Flashlight, flashlight … where is it? He fumbled along the Captain’s desk, papers, and books cascading to the floor. The slave never needed a flashlight of his own, the Captain always kept the necessary items at hand, always. Ben found the flashlight and raced back to the shed, leaping over the fallen tools. The bolt cutter was right where it was supposed to be on the shed wall. The slave grabbed it and opened the metal jaws. He turned as he tried to position it on the hardened steel of the lock at his neck. His hands were shaking and his mind was a blur. The slave closed his eyes and felt the cutters bite into the lock shank.

The last thing the he heard was the chuckle of the Captain.

The stars were finally dimming in the dawn sky when the slave finally broke. Blubbering into the gag in his mouth, he tried to form the words to beg for forgiveness. He had already endured the longest session of punishment the Captain had ever inflicted on him and truly regretted his panicked action of the night.

“24. The slave damaged the bolt cutters,” said the Captain, reading off the next offense from the slave’s attempt to escape. He gripped the switch in his gloved hand, some sweat trickling into His eyes as he pulled back and laid the length of the flexible rod across the slave’s red streaked back muscles.

Whack! The slave jerked weakly, hanging spread eagled from his massive muscled arms. He was strung up in the timber framing of the unfinished compound, where only a day before he had enduring the Captain’s new boxing workout. But this dawn was different, now another muscled man, wearing desert boots, and desert BDUs was bound shirtless, hooded and gagged, on the opposite wall of framing. The slave tried to focus on the muscled, bound soldier with dark curly hair to try to pick out what was familiar about the other captive, but the tears welling from his eyes obscured his vision.

“25. Stole and soiled an official uniform of the County Fire Agency” Whack! The switch came down across the slave’s tight buttocks. The slave thrashed and jerked wildly, screaming in the gag. He continued to thrash, screaming and choking on his own spit.

The gag had come lose and the slave gasped for air, gulping hard and jerking his arms in the shackles.

The Captain stepped back to survey the scene. The slave slumped in his shackles and panted. The other captive shifted in his boots and his cock, pointed out from the fly of the BDUs was erect and dripping copious amounts of juice. He panted a bit and drool dripped down his whiskered chin. The Captain walked over to the captive and surveyed the bound muscle meat. The captive could hear the fall of His boots and his cock jerked again. The Captain reached up and rubbed the side of the captive’s head and the captive responded by nuzzling the black leather glove. He then rubbed the bound man’s neck and moved toward the black short hairs of the stretched pecs and then down the trail of hair on his abs that ended below the belt. The Captain stroked the captive’s ab ripples up and down. The tenderness of the touch was in stark contrast to the brutal punishment of Ben, a point not lost on the sobbing, pain-wracked slave.

The slave moaned loudly and began to sob and cry even more from watching the Captain cup the soldier’s chin in his hands and plant a deep kiss on the whiskered face. The slave realized suddenly who the other man was. It was the handsome muscled CHP officer who had fucked the slave in the back of the truck weeks earlier! Despite his pain and the numbness creeping into his arms, the slave bellowed like a buffalo and jerked violently at the shackles on his arms and legs. The slave was now enduring the ultimate punishment: the loss of the full attention of the Master. 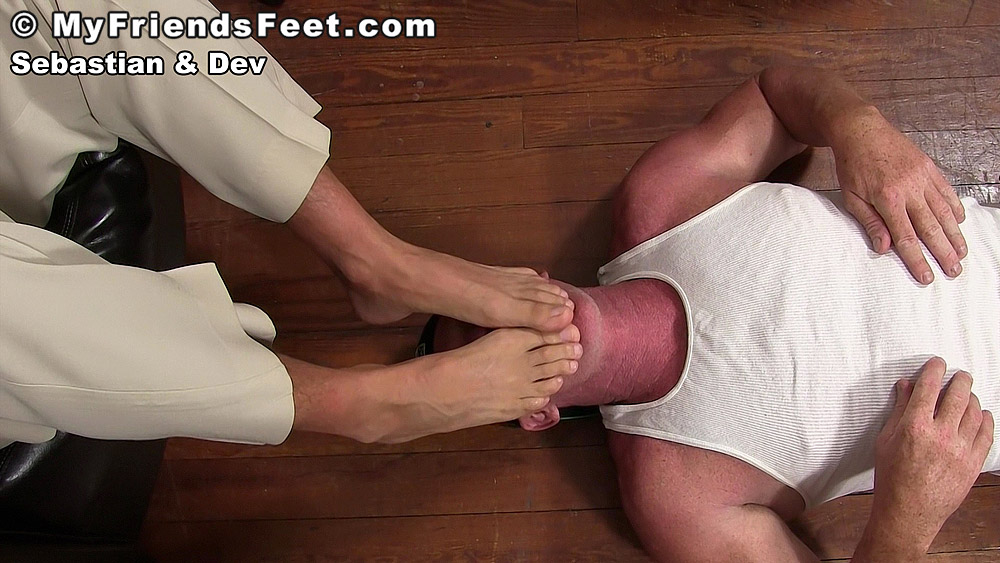