“Only 3 more feet!” shouted the Captain just before he began swinging the pick again.  The slave did not look up but continued to shovel the dirt and rocks out of the trench he was buried in up to his knees.  The sweat ran down into his face and made it hard to see.  But when he did take moment to look up, he could see the Captain was right.

They had almost finished the trench, its end marked by a tiny yellow flag snapping in the warm breeze blowing down the length of the canyon.  The Captain had taken the lead on the digging, swinging the pick to break up the soil enough for the slave to shovel it out and carve the trench.  The only fortunate thing about the project is that it was almost done and that the day had not been hot.  The slave had been trying to focus on each shovel full of dirt, pushing himself to complete each toss, not looking up, should he lose focus and strength on another grueling day as the 24/7 labor muscle slave at the Bear Trap Ranch. Arranged just beyond the tiny flag were 8 concrete piers that the Captain and slave had cast days earlier.

The Captain had decided to build a new truck shelter with a solar array on the roof.  That meant digging and casting foundation piers and digging a 200-foot long trench across the dry grass from the camp compound to the new structure.  What that meant for the slave was days and days of backbreaking work.  The soil of the Bear Trap Ranch had long since given up the last of its moisture to the summer heat and even now, in September, months since the slave had been collared on the ranch, the ground was more like rock than soil.

The Captain worked with the slave each and every day that He could and seemed to have boundless energy to spend on the hours of hard work that were involved with keeping the ranch running.

On this project, he had shown the slave where to dig the foundation holes alone while he would be away in town fetching supplies for the remote ranch.  That day, the slave had been given a time limit to have the holes dug and ready.  Ben’s chain, connected to a ring in his collar, had been wrapped around a small oak tree nearby. The length allowed ample room for him to work.  The shade of that tiny tree sheltered a cooler full of frozen water bottles, protein drinks, and special rations for the day.  The Captain left at 9 am and was due back at 3 pm.

Even through the Captain was late, returning around 4pm, the slave had not quite finished the last hole by the time the massive pickup appeared on the dirt road, trailing a cloud of dust.  The slave had encountered a large boulder buried in the soil, and he had labored for hours in a futile attempt to dig around the rock and lever it out of the way.

The Captain slammed the truck door and walked briskly over to the work site, the two dogs bounding behind him with excitement.  He gave the slave a stern look and inspected each hole, 8 all together, 3 feet deep each, until he stopped at the last hole.

It was only 1 foot deep but about 8 feet wide now, heaps of dirt and gravel lying all around it.  The slave was totally covered in sweat and dirt, his eyes staring downward inside rings of dust like a muscle-bound raccoon.  The Captain stepped down and scuffed his worn black boots on the rock, tapping it with one toe.  He looked over at the panting slave, a stream of sweat running down his chest onto his abs and his metal bound cock.

“Boy, you did not complete the project in the time allowed. What do you have to say for yourself?” said the Captain.

Ben gulped and caught his breath, “The rock SIR, the rock.  I could not get it out. Too big.”

“You should have called, why didn’t you call?”  The Captain asked sternly.

The slave felt the sudden rush of his own single-minded stupidity!  The phone!  The Captain kept a cell phone packed in the cooler with the other items in case the slave had an emergency or issue while He was away (the cell phone also contained the combo to the lock around its neck, but the slave did not know that).  It had been there the whole time but the slave had not thought to call and ask what to do about the rock and instead had burned through three hours of digging.  The slave slumped back on his haunches and moaned in frustration.  The Captain explained:

“The rock is an ideal foundation, you should have stopped when you hit it.  You would have had lots of time for rest had you done that.  Now you will be too tired to workout hard with me!  The slave groaned.  Workout?  After such a long day? Fuck, I will never make it, he thought.

The Captain reached down and unlocked the long chain from the slave’s collar.

“Shower” he ordered and walked off.  The slave struggled to his feet, his legs and arms heavy and sore, already stiffening in the cool evening air.

Workouts were the reason the new shelter was being built.  In the past month, the Captain had turned the old truck shelter into a sort of open-air gym and dungeon.

The building was a timber framed open structure, setting directly against the north side of the camp compound fence.  It had eight thick timber posts that held up a set of trusses for the roof.

The shelter was big enough to cover the huge, 22-foot-long pickup truck totally but recently more and more space was given up to a bench press, squat rack, roman chair, and racks of steel plates.  Dangling from the rafters were dozens of chains and straps to hold manacles and a heavy-duty sling to support the full weight of the muscled slave’s body when it was strung up, beaten, tortured or raped.  Framing now lined the sides of the shelter, ready to accept panels of siding when the weather turned cold in late October.  But for now, it was wide open.

After showering, the slave waited for the Captain to begin the workout.  He stared at the door of the cabin and He soon appeared wearing boots and tight black Under Armour shorts.  The slave had to admire the impressive gains the Captain had made in His own body since taking on the slave.  The Captain seemed to thrive on having a work slave and threw himself into every task as much as he demanded the slave to do the same.  Each week the Captain drove the slave to the gym in the tiny town of King City for a truly intense three-hour workout.  In the gym, the collar had to disappear, but the slave protocol remained.  The slave, his body clad in black and white Under Armour gear, was the Captain’s workout partner, silent, massive and strong.  They would work out with nary a word spoken, the Captain listening to an iPod.  All the other men would stop and stare at the duo, envious of the slave’s incredible bulging body.  If men started a conversation, the Captain would explain away the slave’s lack of interaction with a sad but scripted story of a distant cousin struck dumb and deaf by a childhood disease, and now totally dependent on the charity of the family.  That usually stopped the questions but not the envious stares.  The slave had observed more than one pair of gym shorts tented as he worked his muscles with the Captain.

The Captain came in under the shelter and the slave tried to steady his exhausted limbs. They were trembling with fatigue and he could barely grip the first set of plates to set on the bench press bar.

“First set: 20 reps,” the Captain ordered. The naked slave laid down on the bench and gripped the bar, trying to focus and breathe.  He lifted the bar, the Captain looming over him in the spotter position.  He lowered the bar, but his arms were jelly! He struggled to make the first rep and grunted deeply as he reset the bar on the supports.

“One,” said the Captain.  The slave looked up past the bar at the firefighter.  His cock was swelling in his shorts and his eyes gleamed hungrily.

He was holding two sets of handcuffs in his hands, and he quickly locked them on to each of the slave’s wrists, then the bar.

He walked around to the front of the bench press and straddled the muscled captive with his own legs.  He brought his body down to bear on Ben’s spread chest and pushed forward until his bulging shorts were inches from the other man’s face.

“I like workout night, when it is your mouth getting the workout, boy.”  He said as He lifted the slave’s head to meet His shorts.

The slave eagerly bit and mouthed the black Under Armour fabric, and the dominant man ground it into the slave’s face.

“Take it out,” ordered the Captain softly.

The slave eagerly complied, realizing that he would be getting a workout of the mouth instead of the body.  He gripped the bar and craned his neck to pull down the tight shorts and allow the Captain’s swollen cock to drop out. He tugged with his teeth again to free the big shaved balls.  The Captain smiled and pushed his nuts into the slave’s hot open mouth.  The slave took them eagerly, worshipping each fleshy orb with the deep gratitude of being able to be used hard, long and with purpose.

Metalbond would like to thank FirefighterSIR (aka The Captain) for this story — and for the original photographs that accompany each installment. 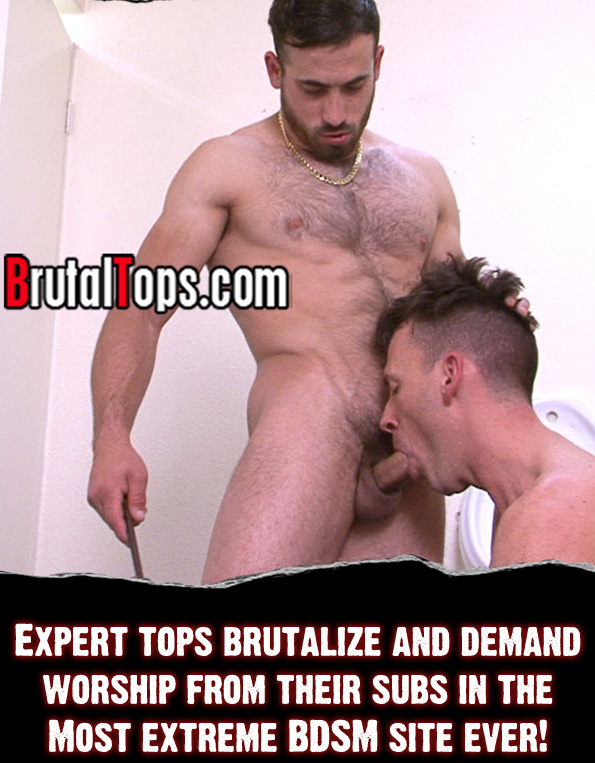