Summer nights dragged on more than winter nights it seemed.  It was not that the night was so long, but the sounds mixed with the heat lingering in the camp kept the slave up long past the time he should have slept. Crickets whined all around the fenced compound where the Captain’s tiny cabin stood and the wicked laughter of coyotes echoed through the canyons near and far.  The sound would first be of one lone coyote calling out in short howls then he would be answered by a yip or a bark.

Then more voices would chime in and gather.  Then silence, until the pack had cornered some wayward jackrabbit.  At the kill excited howls and barks would become a frightening garble of voices that would cut off suddenly, total silence.  That is when the slave would worry, looking, imagining red eyes glowing at the edge of the dark brush, looking to find a way into the compound, to him, as he lay vulnerable, caged like a chicken in a coop.

The moonlight tonight was intense, having risen like a big orange spotlight just as the Captain had secured the slave for the night into his cage. His skin tingled and throbbed from the long exposure to the sun and dry air, coupled with the welts and cuts from long days of work in the spiny brush that sprouted everywhere on the ranch.  The slave pulled the blanket over his head despite the warmth to hide from the glare as the moon rose, turning to a white light that cut through the thin canopy of the oak tree.  The moon moved slowly overhead, casting shadows over the ground but never in the right place to give his tired eyes the rest they needed.  Just as he would doze off under the cover of the blanket, a rustle would wake him.  Perhaps is was a jackrabbit sneaking in to steal tomatoes out of the tidy garden growing all around, lush from care in this harsh landscape.  Or it might have been one of the big ants that explored all over in the cool night air, looking for scraps of food to take back to their underground lairs.  The slave shifted uncomfortably, his thick metal collar clanking against the lock securing it to his neck.  He groaned and pulled the blanket over his head again.

Summer nights dragged on for the Captain as well.  His computer screen cast a blue glow over his bearded face and thickly haired chest, but he was not looking at it.  Just inside the screened windows of the cabin, he leafed through a book he had paged through a hundred times before.  He bent to examine a picture on one page, sipping his whiskey idly.  The isolation of the ranch could be overwhelming on a warm night.  But why now?  Why not in the depth of winter when rain and cold kept everyone indoors for days at a time?  The warm nights should be a time of enjoyment, to be freed from heavy coats and workwear, stripped down to just boots and cargo shorts, long warm days of near constant sunshine to work, build, and train.  His skin was deeply bronzed but he made sure he did not become leather, ordering the slave to spread lotion over his entire body each day to keep his skin in the same perfect condition as his muscles that played underneath.

Summer underscored in many ways the total isolation that the Captain had chosen for his life.  Far over the ridges to the north, motorboats ripped across the huge reservoir and music pumped at late night parties on houseboats tethered around the shore.  But here, the road never saw a single truck and it was not unusual for the dirt to lay unmarked by a wheel track for days after a summer thunderstorm.

Inevitably the Captain turned to a file on the laptop and clicked it open.  Inside tiny thumbnails displayed images of muscled wrestlers drenched in sweat in tight singlets. In others, Underarmor workout gear clung to their strong bodies.  As he flicked from one image to the next his cock began to swell, pushing up from between his legs to lay stiff against his abs.  He continued to click open pictures, until he stopped and stared at one in particular.  The muscled blond jock into the photo was tied to a chair, his cock pulled out through the leg of the shiny black shorts he wore.  His head was cocked back showing off his groaning mouth and the heavy black blindfold fitted over his eyes.  A hand reached into the photo and stroked his stiff dick, another groped his thick pec as the jock tensed his abs under smooth white skin.  The Captain gripped his own rod with his rough hand as a dribble of pre-cum slid down through his fingers to the wood floorboards.  The Captain had an idea.

Outside, the night pressed close around the cabin, still and dense.  The moonlight made sharp shadows under the trees scattered around the inside and outside of the compound fence but the wire mesh shone like silver webs enclosing the protected space inside.  As soon as the screen door slid open, the slave stirred under the blanket.  He peeked out from the edge, watching as the Captain stepped outside, wearing nothing more than his black work boots stuffed onto his feet unlaced.  He was holding the chain leash plus a set of leather wrist restraints.  The slave’s eyes widened with curiosity.

The muscled firefighter grabbed a plastic patio chair and dragged it across the garden to the slave’s cage.  He set it in front of the cage door.  Then as the slave watched, eager to service his Master, the man did a curious thing: he slowly strapped the thick leather wrist restraints to his arms.  After cinching the restraints tightly in place, the Master opened the cage door and the slave sat obediently awaiting the leash to be clicked into place on his collar.  The Captain settled into the chair, sliding it up close to the cage so that his booted legs straddled the slave’s massive shoulders.  He pulled the leash closer and closer to his stiff cock until the slave eagerly reached with his mouth to take it.

But as the slave began to accept the thick rod, the Captain suddenly jerked the leash tight, forcing the dick down the slave’s throat to the root.  The slave bucked and struggled, but the Captain held firm, yanking hard on the chain.  The slave reared back and tried to retreat into the cage, coughing and gagging, spit dripping down to the dry earth.  The Captain was unrelenting in his pressure on the chain but then did an even more unusual thing.  He pulled the chain though to the back of the chair and stretched his own arms over the back as well.  With a quick movement, he clicked the wrist restraints together then clicked the leash tightly to them.  Now his own hands were locked behind the chair and the slave was chained down, forced to take his full rod.

The effect was electric on the Captain.  He bucked back again, pulling the slave forward out of the cage, but the slave’s mouth was still stuffed with meat.  His man’s abs tensed, and his chest heaved and more sweat dripped down the valley between his two hairy pecs.  His cock was being forcibly massaged past his orgasm and how began to swell towards another erection.  The Captain threw back his head and grunted, rolling it back on his thick shoulders coated with sweat in the hot night.  The slave began to recover himself and realizing what was happening, sucked and licked at the thick rod with renewed gusto.  He pulled back towards the cage, forcing the burly man’s wrists down and stretching his muscled body more.  The slave could see his nips swell and the sweat running down towards his cock.  The Captain moaned with pleasure and lust, rolling his head back and forth, his beard flecked with sweat and spit.  He suddenly bucked again, more cum splattering into the slave’s mouth accompanied by choking and sputtering from the slave.

Metal would like to thank FirefighterSIR for this story! 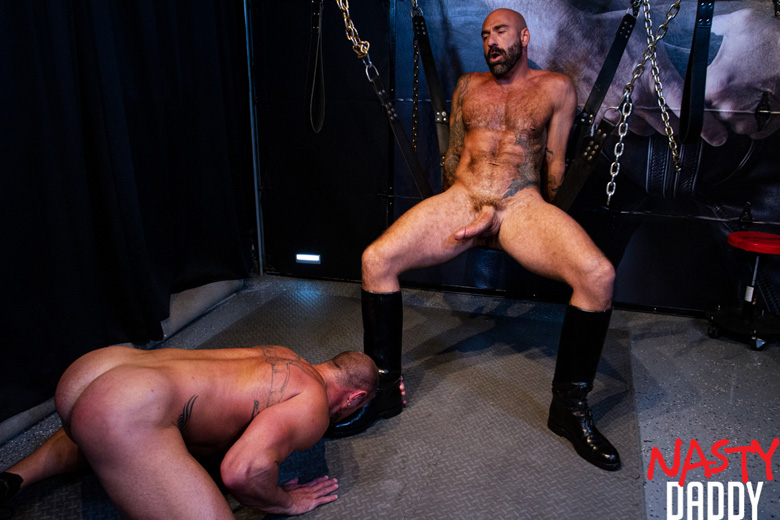