Jax snored softly in a hammock hanging in the warm night air, totally exhausted and a bit sore, his tan football player body marked with bruises and red marks. But he slept deeply and easily after being totally drained from his intense experience. Not so much for grunt.

The collared slave was the owned property of the Captain, and as such grunt’s every action was controlled by him. The slave could hear Jax above him sleeping, but his own night was sleepless and uncomfortable.

The cage sitting under the trees wasn’t long enough even for a short stout person like grunt to lay in fully outstretched, so the slave was huddled on his side, bunching up one blanket to rest his head on while the other blanket barely covered his naked body from the cool air dropping down through the forest as the night wore on.

The slave’s mind kept going back to the situation that landed it in the cage as punishment.

Earlier in the day, the young football stud and the bearish deputy had both been released and spent time laying on the big outdoor bed with the Captain, resting and hearing his reassurances and praises, receiving the important after-care of an intense session. The three chatted softly, occasionally sipping water, before the deputy sheriff gathered himself up and departed. The slave busied himself with the evening meal, but grunt was distracted, his uniform crotch wet with dick drip.

All it could think of was the monthly milking release grunt was due to receive. The slave’s gaze kept returning to the golden jock boy lying nearby, grunt began to tremble uncontrollably.

Suddenly, grunt’s knees buckled and it dropped a plate full of cooked chicken on the patio stones. The Captain’s pack of various mutts seized the opportunity and quickly ran off with half of the meal. The slave stumbled backwards from the grill, spinning around, its flailing further upsetting other plates set already on the outdoor trestle table. Glasses tumbled onto the stones, grunt’s own boots grinding the fragments further as it lurched around the patio. Now, olives, condiments and salad leafs lay everywhere and the dogs had run off to the corners of the garden to gobble their prizes. The slave just managed to steady the table when the Captain loomed up in his blurred vision, with Jax just behind him, puzzled. The grunt couldn’t help but ogle the boy even during its moment of distress. That wasn’t the first mistake of the aftermath.

The Captain was clearly furious, his eyes moved around the patio, looking at all the upset plates and chairs. But when he turned to Jax, he presented a smile and reassuring tone, “Just a little accident. Go lay down, I will deal with this.”

It was getting dark. The canyon breeze ruffled the trees overhead as grunt cowered in the shadows of the road. A pair of deer stepped carefully out of the forest, sniffing the air, snorting in the slave’s direction. Their ears swiveled to catch voices up in the camp. The Captain and the jock boy were chatting as he pulled together some food to rescue the spoiled meal. The grunt could hear Jax’s husky voice responding cheerily, but the grunt was in a black mood now, chilled in it’s wet uniform, spent from its ejaculation, and reluctant to return to its fate but knowing that this road lead nowhere.

The darkness deepened and the breeze died. The slave shivered even though the night was warm. It could hear an occasional bit of conversation or the dogs stir and bark at some rustle in the dark wood, but no command was called out from the Captain to return and serve. Was he through with the slave, ignoring its absence, and eager to be rid of it in favor of young fresh muscle meat?

The slave had little opportunity to wallow in self-pity, though. The deer picking at foliage nearby started away suddenly and a hand gripped the slave’s collar. The slave heard the chain clicked into place and suddenly it was off its feet, jerked forward and forcibly dragged back up behind the gate. The gate clanged shut and Jax grabbed grunt’s kicking boots so that between the two men, they carried the short stocky slave back into camp.

A fire was blazing in the clearing and a chain hung down from the trees. Jax and the Captain wrestled off the slave’s clothes and locked its wrists into restraints attached to the hanging chain. Jax pulled hard on the chain, pulling grunt up into a standing position, feet barely touching the dirt, turning slightly back and forth.

Jax stepped back beyond the fire. The Captain stepped up, fully clad in black, black boots, tactical pants, compression shirt, and black leather gloves. A short whip was gripped between his hands. Jax’s husky voice sounded over the crackle of the fire, reading from a list of infractions from the day. The list included 22 items, meaning 22 lashes. The slave trembled and shook in fear as the Captain stepped back to prepare the first lash of the whip. The long tail cracked low across the slave’s bare butt, leaving a red mark. The slave barely contained a bellow of pain.

The first five lashes came quickly, but the Captain knew the slave had endured this many before, and the punishment needed to involve more than just it’s back. He rummaged around the sex toy box and returned with a balls parachute, a metal spike, hammer, and chain. Kneeling just behind the hanging slave, the dom drove the metal spike into the hard dry ground. Then reaching up, grabbed the slave’s drained nuts and snapped the ball parachute around their base and linked the chain to the spike. Now each jerk of the slave’s body would yank hard on its nuts.

Jax watched with hungry interest. As the Captain resumed the slave’s lashes, the jock moved forward, dropped to his knees and nuzzled the Captain’s black clad crotch. The blond boy quickly synched his slurping mouth to the movements of the lashing as they both enjoyed the slave’s punishment.

Fiction by FirefighterSir on Recon

Metal would like to thank FirefighterSir for this story! 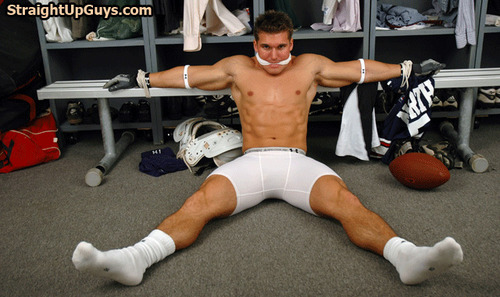