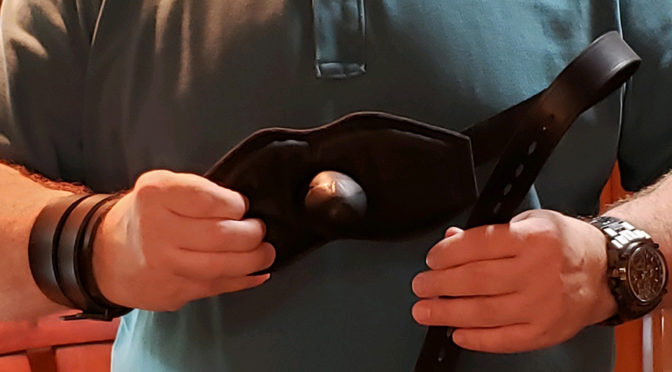 The screen went blank and 502 stared at it dumbly.

The slave whipped around and saw a man standing at the entrance to his cell.  The tall man was marked as a staff member: he wore a buckled leather cuff around his right wrist and a heavy, stainless steel chronograph on his left wrist.  The name tag on his navy polo shirt read “Chris.”  Khaki cargo pants tucked into Corcoran boots were held up with a wide black belt that had various items hanging from it.  Chris’s muscular build, dark hair and goatee make 502 think of a dominant porn star ready to pounce on a submissive who would become his victim.

“I’m your trainer, 502,” Chris stated.  “I’ll be giving you a tour of the facility and supervising your acclimation.”  As he spoke, Chris put his hand on 502’s head and then slid his hand down.  A thumb wormed its way into 502’s mouth and he instinctively began to suck and run his tongue over it.

The slave dropped down and began to lick one of the Corcoran’s, grabbing the boot with both hands and pressing diligently with his tongue.  A nudge from the toe of the boot directed him to start on the other boot.  He attacked it in the same fashion and Chris shortly said, “Stand up.”

Chris was taller and wider than the collared slave.  This excited 502 and he looked the trainer over from head to toe.

“Eyes down.  Always, unless directed otherwise.  Let’s get you rigged up for the tour.”

Chris pulled out a leather gag from one of his pockets.  The strap was red leather, contrasting with the black portion that held the silicone penis that went into 502’s mouth.

“The red Speedos and the red gag indicate to the patrons that your holes and cock are not available for use.  Obviously, that will change.”

Chris caught 502 stealing a glance at his hands as he inserted the gag.

“Yes, I’m wearing a Bulova Precisionist chronograph.  Big watch.  You had one at home, no?”

The slave nodded slightly as Chris turned him around to buckle the gag.

“You’re not the only one with a thing for watches.  One of our patrons paid handsomely for the opportunity to bring in watches for the staff to select from.  He seemed to enjoy helping each of us select one and then sizing the bracelet so the fit was perfect.”

Chris tightened the buckle and added, “Of course, that wasn’t the only service he provided before he was done.”

Number 502 felt Chris grab one hand and then the other and clip the wrist restraints together behind his back.  Strong hands pushed him to turn around, facing Chris, and a leash was attached to his collar.

Chris led 502 past cells like his own.  They appeared occupied—there were clothing and boots visible—but no residents were visible.

“I’ll give you a map of the facility; it’s rather large and it’s easy to get lost until you know your way around.  Note that your collar has a tracker in it and we will know where you are at all times.  The software allows us to program in your schedule, so if you wander somewhere you shouldn’t, an alarm goes off and a staff person will track you down. You will be punished, of course.

“The staff and slaves reside in this building, along with the equipment, gear and play spaces.  The patrons and managers stay in a separate building.  They have nicer quarters and dining areas; there are a few play spaces there.”

The trainer and slave passed a cafeteria that opened onto the hall.  “The staff and slaves eat here, at separate times.  The food is good.  You’ll be on a special diet, however; you need to lose a few pounds.”  Chris slapped 502’s belly a couple of times, reminding him that his washboard abs were hidden under a load of laundry. 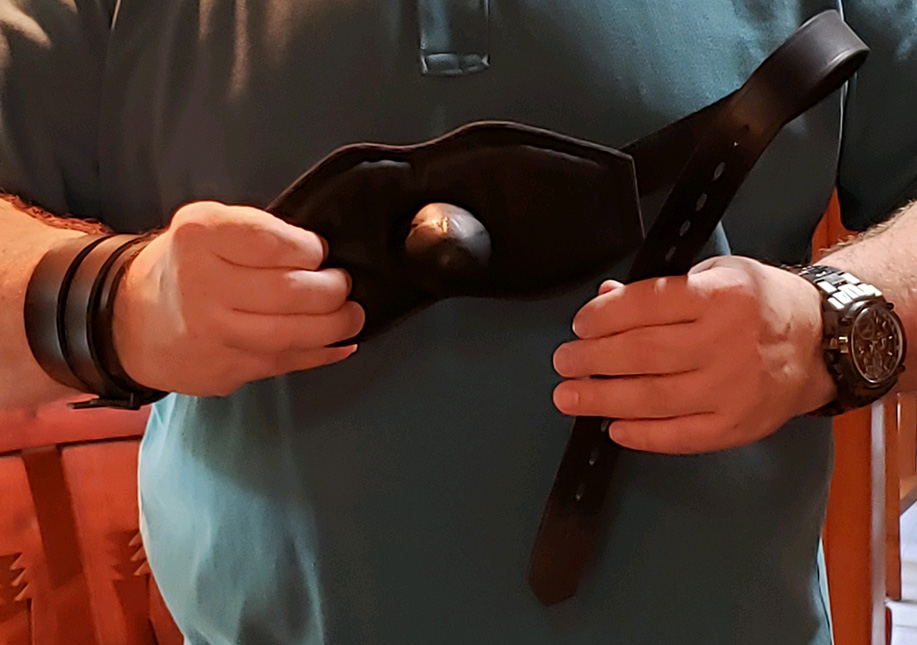 Chris stopped, swipe an ID card over a scanner, and door opened.  Inside, 502 surveyed what looked like a rather specialized men’s clothing section at a large department store.  To the right were clothing items.  He noticed orange scrubs, orange jumpsuits, chambray shirts and pants, and shelves with underwear and jockstraps.  There was a rack of canvas straitjackets.  Towards the back was footwear:  a huge variety of boots and sandals (?), clearly available in multiple sizes.  To his left was leather.  The scent was intoxicating and the variety of items was tantalizing.  Vests, jackets, harnesses, jockstraps, wristbands, bracers, gauntlets, hats–anything he could imagine.  Beyond the racks of leather apparel, he saw a wall with collars, hoods, gags, blindfolds, head harnesses, masks, leather straitjackets and many, many restraints.  He felt his cock stir, a feeling that intensified when he focused on costumed mannequins.  Several were dressed as Roman or Greek soldiers; one was rigged up like Gerard Butler in Gods of Egypt; another was a leather Elvis from his comeback special; and, of course, a California Highway Patrol uniform, complete with tall boots, leather gloves and sunglasses.

Chris pulled on his leash and pulled him forward as they navigated towards someone at counter in the middle of the room.  Number 502 recognized Mack from the video.  As they approached, Mack pulled up a duffle bag and passed it to Chris.

“I measured him when he was in the Doctor’s office.  This should fit.  Have. him try the items on and let me know if there are any issues.”

“Thank you, sir,” Chris replied as Mack turned walked away.  Chris took a strap attached to the duffle and ran it over 502’s shoulder and around his waist, clipping the end on to the duffle.

“Beast of Burden,” Chris said with a smiled.  Number 502 rolled his eyes, catching the reference to the out-of-print Steven Saylor/Aaron Travis work.  Well, at least his captors were well read.

Chris opened the duffle, rummaged around, and pulled out a pair of flip-flops.

“Put these on.  You’ll need them when we go outside.”

After 502 slipped on the footwear, Chris headed toward the door, pull 502 behind him.  They stepped across the hall to another door.  Another card swipe, and they entered what 502 guessed to be Charley’s domain.  Once inside, 502 let slip an unintelligible expletive.

“Yep, pretty impressive.  Especially for a steel junkie like you.”

Number 502 blushed at the comment as he surveyed the room.  One wall was regulation law enforcement steel:  handcuffs, leg irons, transport irons, sets of handcuffs chained together for restraining multiple prisoners, and corresponding sets of leg irons for a chain gang.  Another wall held the steel that 502 had looked at many times online:  wrist shackles, leg irons, and collars from manufacturers such as Dungeon Delights, Parus Leder and others.  Heavy steel restraints, some frighteningly heavy.  The bins at the foot of the wall held the excess:  whether duplicates of what hung on the wall or items too heavy or numerous to hang, 502 couldn’t tell.

The mannequins are what caught his eyes here, too.  Charley clearly liked recreating movie props, although he suspected none of these were made of plastic resin.  A “wow” as unintelligible as his other outbursts escaped his gag.

A spiked head cage like the one Sam Jones wore in Flash Gordon.  The ornate and jeweled collar like the one around the neck of a chained Manu Bennett in The Shannara Chronicles.  A metal hood/blindfold that resembled the one used on prisoners in the Foundation series.  “Wasn’t that just CGI?” 502 wondered.  A Paul Newman-like mannequin in prison garb wearing two sets of leg irons that resembled the ones from Cool Hand Luke.  And a Steve Reeves-like mannequin chained between two posts from a scene in Hercules.  “I bet those chains aren’t made of wood,” 502 thought.

As Chris led him to the back of the room, which appeared to be a workshop, 502 noticed larger items:  a prison transport chair; racks of various kinds, including those for slings; and a massive collection of spreader bars and steel restraints with bars between the cuffs.

“Do you need any additional measurements, sir?”

Number 502 turned to see Charley look up from a workbench and look him over.

“No, he’s pretty standard.  We have enough items that will fit him.  No need to build anything new.” 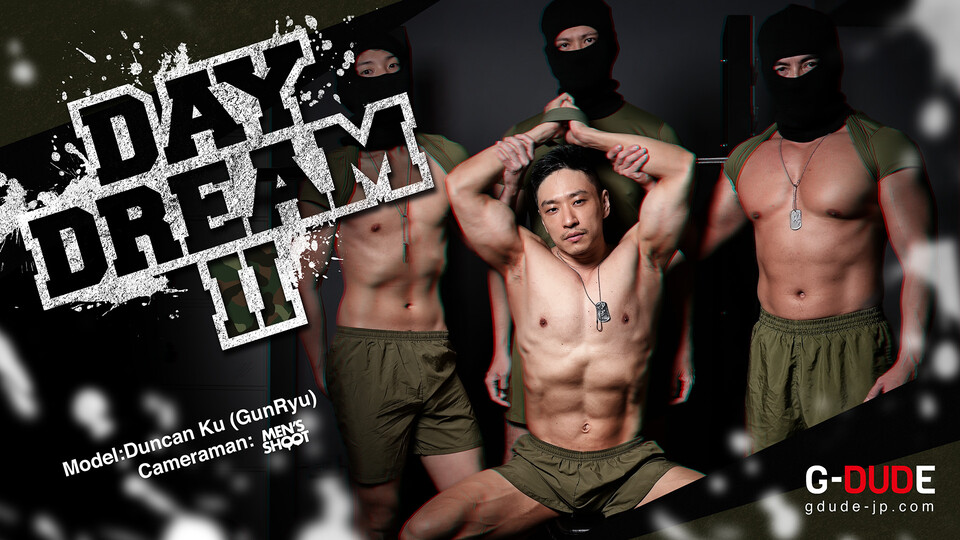