Chris led 502 out the door, down the hall, and around a corner.  Stopping in front of a double-wide door, he unclipped 502’s wrist restraints.

After he had loosened up the muscles in his arms and shoulders, 502 put his hands behind his back and Chris secured the restraints.  He then opened one of the doors and pulled on 502’s leash.  The slave stepped in, quickly stopped in his tracks, and repressed an unpleasant wave of déjà vu.

“The patrons will be worked up after the milking, and 317 here may be providing them with entertainment.”

A bedside table with a surgical tray with sounds, hemostats, and some unidentifiable equipment suggested what kind of entertainment was on the program.

Chris led 502 past the beds and then turned towards a door on the right.  They passed a dentist’s chair and a bench with dental implements before Chris opened the door and motioned 502 in.  When Chris hit a light switch on the outside, 502 saw he was in a padded cell.  And he was not alone.  A figure in a white leather straitjacket was fixed in the center of the cell.  He wore a white leather hood and a steel collar around his neck sported four loops. Chain ran from each loop to a corner in the ceiling.  Although he couldn’t see the mechanism, 502 reasoned that each chain had been tightened to hold the slave precisely in place.

“One of the patrons brought his slave here to experience our padded room,” Chris said.  “I don’t know if it’s a reward or a punishment.”

Chris guided 502 through a set of double doors like those in hospitals.  On the other side of the door, 502 found himself in a small jail facility that included an intake area and two cells.  Chris strode past a slave restrained in one cell.  Trying to figure out the slave’s configuration, he almost missed Chris’ explanation.

“A couple of the patrons want to reenact a scene from one of the Academy films.”  Glancing at his watch, Chris added, “They’ll be here shortly.”  Getting a brief glance before going through the next set of doors, 502 remembered the scene.  The slave was laying perpendicular to the direction of the bunk, with his arms at his side and handcuffed to the bars.  His legs were in the air and held to the bars with straps, spread in a V-formation, with his head almost hanging off the bunk.  Soon two officers would arrive, taunt the prisoner, unzip, and use his holes.  “Wow,” 502 thought, envious of the slave.

Chris stopped on the other side of the doors, at the entrance to a dark corridor.  As their eyes adjusted to the darkness, Chris commented, “Our jail area is intentionally on the small side.  One of our patrons is designing a separate cellblock and plans to construct it next year.  We have the electric chair for it in storage already, although there’s been discussion about installing it here.  Okay, you should be able to see adequately now.”

They stepped out of the short corridor and 502 found himself in a dungeon.  Rather, Dungeon with a capital D.  The square footage was huge; the floors were a black, springy polymer of some sort; the walls were black; and the ceilings were high, also painted black, with spotlights shining down at strategic spots.  The walls on the left side were textured to imitate the stone and mortar design of a medieval dungeon.  The walls on the right were painted and erotic art hung several places on the walls.  There were hoists in the ceiling at several stations.  On the right side, the hoists had electrical controls hanging down from the ceiling or mounted on the nearby wall.  On the left side of the Dungeon, the hoists were operated mechanically.

Chris took a step back and led 502 to a large touch screen on the wall of the corridor they had exited.  He positioned 502 so he could see both the screen and scan the left side of the dungeon.  Chris touched the screen and took 502 through a slideshow of options available in the space: bastinado, gibbet, jougs, oubliette, pillory, rack, strappado, and more.  As Chris went through the list, he pointed to the area with the appropriate apparatus and made comments.  The gibbet, interesting, was spherical, almost identical to a device 502 had seen in a Bound and Gagged video, and it was occupied.  Not being familiar with the jougs, he paid close attention when Chris directed him to a spot on one wall.  A slave sat on the floor, with a wide, heavy steel collar around his neck.  The chain from the collar to the wall was less than a foot long and attached to the wall above his head, so the slave had to elevate himself slightly to relieve pressure from the collar.

After concluding the second slideshow, Chris led 502 by the leash, saying, “Let’s visit some folks.”  Chris detoured to the right side and grabbed what appeared to be a cattle prod.  He then turned and went to the left side.  As they passed a brazier with hot coals and a red-hot poker, Chris smiled at 502’s widened eyes and remarked, “Serious interrogation scene tonight, it appears.  ‘Nobody expects the Spanish Inquisition!'”

Before he could decide if rolling his eyes was a judicious choice or not, 502 heard a change in the tenor of Chris’ voice as they neared the spherical gibbet and Chris addressed the occupant.

“Excellent, sir.  Thank you, sir,” was the earnest reply from the sphere’s captive.  He sat cross-legged, with Darby-style leg irons connected his ankles and similar handcuffs holding his hands behind his back.  He was blindfolded and, of course, collared and in chastity.

“A bit of behavior problems with 816 recently, which we are trying to correct.  He doesn’t seem to appreciate his situation as he should.”  Did 502 detect a tone of menace in Chris’ tone?

Chris turned the cattle prod so he could access the control at the base of the handle.  When he was sure it was on, he thrust the rod into the cage and touched 816’s thigh briefly.

“Good boy,” Chris replied, and thrust the prod into the cage once more.  His cry was louder this time, but he quickly said, “Thank you, sir!  Please, sir, more, sir!”

“That’s enough for now,” Chris responded and he turned off the device. “I’ll leave this close by in case someone else drops by.”

Chris then turned and walked to the oubliette and directed 502 to look down the grating.  Not sure what he was looking at, 502 discerned that it was a figure wearing a urinal funnel after Chris unzipped his pants, pulled out his cock, and relieved himself.  Clearly, Chris was trying to target the funnel but didn’t seem overly concerned about his accuracy.  When he was done, he zipped up, pulled out his phone and punched in some information.

“We’ve found this is an excellent method for training slaves to accept water sports as part of their lives,” Chris remarked as he tugged 502 to his feet.  “Fortunately, the oubliette has its own air control and plumbing system.”

As they walked towards the doors by which they entered, 502 turned to the slave in the jougs and made a low noise.  Chris glanced over and explained as he kept walking.

“Oh, 913’s collar got too tight for him.  We brought him here, removed his old collar, and put him in the jougs while the collar is modified.

“He’ll be glad to be fitted with his new collar,” Chris added with a chuckle.

Chris opened the doors that led them out of the Dungeon and though the jail area, where 502 saw two uniformed figures with their back to him and obscuring his view of 317,  and then through the medical section.  In the main corridor again, Chris led 502 towards a door marked “Exit.”

“Last part of the tour coming up.” 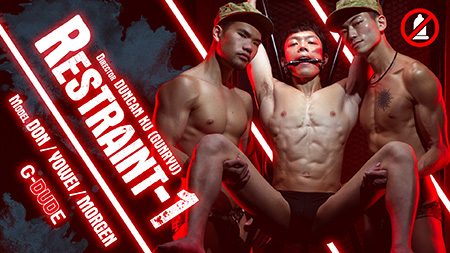