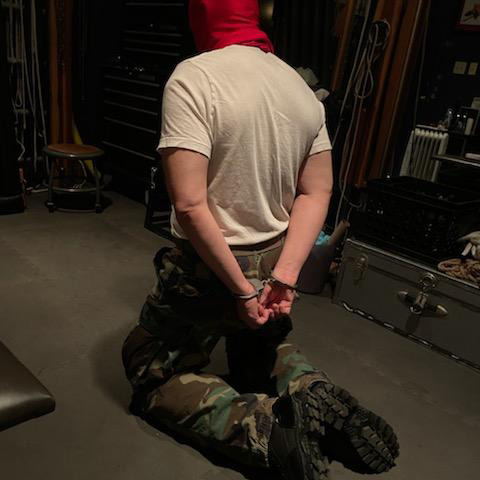 I woke up with a start. John was hitting the side of the cage with a metal rod.  It brought me quickly out of my deep sleep.  I have no idea how long I was out but it probably wasn’t that long.

Once John saw I was awake he unlocked the cage door and motioned for me to crawl out.  A dog bowl of water had been placed near the cage and I crawled over to it and drank as best I could.  When I was finished I propped myself up on my knees.

“Stand up,” John commanded.  He was still in his BDU’s, barefoot and shirtless and looking hot.

I stood up and John began to remove the shackles.  The last portion was the collar and once he had removed that from my neck he let the chains fall behind me with a loud clanking thud.

“Hands behind your head, fingers interlocked.  Spread those ankles, boy,” John further commanded.  He circled me while I stood there exposed.  Nothing was said between us for a couple of minutes.  He just continued to walk in a circle around me.  My instincts said he was not pleased with me since he wasn’t showing any signs of warmth towards me as he did earlier.  I couldn’t be sure.  It might have been an act to keep me off balance.  I told myself that whatever was next I had to do my best to get through it and make him proud of me again.

He finally stopped in front of me and looked me directly in the eyes.

He took his hand and grabbed the bottom of my chin and started talking.  “I hope you enjoyed your rest.  You won’t be getting much more of that today.  I intend to keep pushing you and showing you what you are meant to be.  There will be no more talk of not being able to take what I put you through.  You will take it.  You will endure it.  You will survive.  Understand, boy?”

“Yes, Sir,” is all I said looking him straight in the eyes.

“Move to the center of the room, boy,” he said pointing to a rope that was hanging loosely from overhead in the space.  I hadn’t noticed it when I got out of the cage.  I looked towards the ceiling and saw that the rope was looped through a pulley in the rafters and then to a ratchet set up on the wall.  I figured out some part of me was about to be lifted.  But how?

Next he returned behind me and tied the rope from overhead around my wrists.

John moved around the front and asked, “Do you understand what is about to happen?”

“Very well done, boy.  This will be another lengthy test for you and this time no whining.”  After he said that he produced a front buckle gag and inserted it into my mouth.  He used a small padlock to secure it.  A blindfold was next.

“I have a special ordeal for you to endure.  You are correct, a strappado position for the next few hours for you to endure but with a most interesting component added.  I want you to be completely alone.  I want you to be completely focused on your situation.  And the best way to do that is to take your senses away.  You are already gagged and blindfolded.  Now I take your sense of hearing away.  For the time you are enduring this ordeal you will listen to static.”

I felt headphones being placed on my head and over my ears.  Within a few seconds the droning sound of static came on.  This was going to suck.  It was only a few seconds later that my arms started to be pulled up as the rope was being cranked up into the air.  Slowly my arms were pulled up behind me.  I had to bend over at the waist eventually when my arms reached the height of my head.  John must have been waiting for that moment.  The rope stopped rising when I bent over.

Here I was bent over, wrists in the air with my shoulders starting to feel the burn.  My ankles and knees tied together, blindfolded, gagged and static playing in my ears.  I had no idea what was happening around me.  I couldn’t hear anything. I didn’t know if John was still in the dungeon with me or not.  I was alone in my own world.  This is exactly what he wanted.

The static droned on and on.  I had no concept of time.  Every now and again I would attempt to stand upright only to put further pressure on my shoulders.  It only lasted a few seconds before I bent over again.  John had arranged another bondage dance for me.  It was another predicament position to endure.  Bent over for a while.  Then a brief few moments standing only to start the cycle over again.

If he was watching he was getting the show he wanted.  I on the other hand just kept telling myself to keep at it. I had to make it through and prove I was worthy of his time and energy.  This was going to be a long haul.