The sense of losing track of time made me feel helpless. It was 16:00 when I took a look on the clock hanging on the wall before we left the room. All of us were sitting in the wagon with 2 guards watching us sitting near to the back door. There was a gate between the guards and us. The weather was hot and air circulation was bad as there was only two 6”x6” small windows with iron bars in the inmate compartment. We sweated like just finished diving. The drive was long for the 40 miles and it took 2 hours for that because we were moving slow due to traffic jam in the city.

After we left the city, we were driving on a bumpy road and the air felt fresher. We took turns to peep outside to enjoy the scene on the way. It was very rural with lots of sugar cane and banana trees planted on both sides. Conversations were allowed and we tried to figure out our destiny. We wonder if we were going to be in this restraints for the next few days or not because they were not heavy enough. Chuck told us that according to arrangements, there should be a collar. We also talked a bit about our public arrests. Eric and Vincent were picked up in a street side grocery store when they were getting some drinks. They were surprised and shocked when the cops grounded them, but immediately notice that this was part of the play. Chuck and Daniel were picked up on a street market too. Chuck told us that this public arrest was not arranged beforehand and he liked it very much. We all agreed that this kind of public arrest should be included in the role play because getting arrested and handcuffed in front of a large crowd of audience was fascinating. We don’t think we can try it at home.

Finally the wagon stopped and the back door was opened. We started stepping out of the wagon one by one. The chains of our leg irons was 20 inches and it was a large step from the wagon to the ground. Chuck and William lost balance because of the short leg irons chains and felt on the ground. I wanted to help them to get up but was stopped by the guards. I just watched them tumbled to get up. I took a look at the surrounding and found out we were surrounded by sugar cane fields. There were only a few houses up in the hillside and there was no road leading there, only a muddy walking path. The sun began to set and I wondered if they have electricity supply or not.

We were ordered to line up in one row and followed the guards to walk up that half-mile path. We all remain in silence with only the dangling sounds of our chains. 1 guard walked in front while the other 3 were at the back carrying big and heavy bags with them and I wondered what was inside. When we arrived the end of the path, there were 6 houses there, 2 of them made by hays, straws and woods – very tropical look. 3 houses looked like brick structures and the largest one was a concrete structure. We found ourselves on top of a little hill with about 30 other houses within our sights. There were some villagers looking at us when we arrived and they asked the guards some questions. I don’t understand their conversation but from their body movements, I guess the guard told them that we were the one who were going to help them with fixing of the paths leading to the surrounding scattered villages. Later Eric told us that I was correct. More and more villagers came and I thought they were the first time to saw 6 inmates in restraints. Whispering and gossips were heard among the villagers because we all dressed in same T-shirts, camo pants that looked like inmate uniform.

We were ordered to went inside the concrete structure and found there were light bulbs hanging from the roof. It was a big hall with 2 rooms, we first enter a smaller room with 2 desk and a door leading to the big room at the rear. We heard some engine noise outside and minutes later the light bulbs were lighted. They have an electricity generator at the back of the building.

Then we walked into the bigger room that was quite empty. On one side of the room was a wooden bench about 6 feet wide and 30 feet long attached to the wall. On the other end of the bench were 8 metal ‘O’ rings screwed to the wood. I wonder what was the purpose of all these. On the other side was cold concrete wall with rings attached to it. I know these rings were to hold chains restraining prisoners. There were rows of barred windows about the size of 6” x 2’. The whole room looked like a prison cell. I got hard because I knew we were going to spend our days here. We were ordered to stand to the wall and waiting for our ‘Warden’ to come. The Warden and his 3 guards entered (they were the cops escorting us) and gave us the rules and regulations that we must observe while we were serving our sentence. After all the briefings, he told us that we will be put in permanent shackles now and he will call us out one by one to have our shackles fixed. He then left the room with his guards leaving us in the cell. We moved to the wooden benches and we figured out that these will be our beds. We were also looking forward to have our restraints changed. The handcuffs and leg irons were too ‘light’ and ‘comfortable’ for us.

Minutes later, one guard came in and called Daniel out and we heard metal banging sound. It took 15 minutes before Eric and William’s turn. I was the 4th one called. When I reached outside I couldn’t see the other guys. I saw an anvil and a guard took a set of black metal manacles out of the big bag he carried to the village. They looked heavy and my heart was beating as I know they will be part of my body for the next few days. One guard released my right wrist from the handcuff of the belly chains while the other place my wrist onto the opened cuff of the shackle. Now I can take a close look at my shackles. They were about 2 inches wide, hinged with a hole on each half where they met and about ¼” thick – thicker and heavier than any bondage gears I have ever tried. The guard closed the 2 halves of the manacle and yelled to give a signal to someone while the other guard held me stable with great strength. Then I saw the warden rushed in with a pair of tongs holding a glowing metal bolt. He immediately inserted the bolt into the holes of the shackles. Then the other guard used a mallet and banged heavily onto the bolt. The glowing bolt looked soft and it changed shape on each bang of the mallet. After banged for a dozen of times, the bolt became flat and the glowing nature was gone, but I could still feel the heat. The warden chucked water over it and smoke came out when the water vaporized. After they finished with my right wrist, they undo the handcuff of my left wrist and applied the other shackle to me. When they proceeded to my ankles, they ordered me to lay down on the ground and stick my foot up to the anvil. They put the ankle shackles over my combat boots. After they finished with my limbs, they ordered me to stand up and tried walking for a few steps. The new parts of my body were so heavy and chunky and I still felt the tension of my ankle shackles even on top of my combat leather boots. The warden acknowledged the bondage and ordered me to move to the other side of the building where I saw Daniel, Eric and William in same shackles like me. I was ordered to sit on the ground with them. There were a few villagers watching us at a distance. I started examining my shackles. The wrists shackles were connected by a 2 feet chains with an ‘O’ ring in the middle. They fitted quite well to my wrists leaving only a ¼ inch space. My ankle shackles were looser, having a half-inch space even with my combat boots. They were also connected by a chain slightly longer that my wrists’ chain with an ‘O’ ring in the middle too. I am very satisfied with my metal bondage because they were heavy, chunky and keyless, giving me a feeling of permanently bond and helpless. The sky became completely dark when the remaining guys finished with their bondage. We were ordered to stand in line while the warden and guards give their orders. They were all sweated to wet. One guard came with our dinner – it must be around 20:00 already, we all feel hungry. Our meals were simple, no bowls, plates, but wrapped in banana leaves. The contents were some rice, chicken and corn all have a smell of coconut oil. We have no forks and we have to use our fingers.

After meal, we were led to a stream about 300 yards away. It took us at least more than 500 steps and 15 minutes to get there with 2 ¼ feet chain of our leg shackles. We were allowed to use the water of the stream to wash ourselves. We could wash our face and arms, but what can we do with our body? Our T-shirt couldn’t go through our wrist shackles. We helped each other out in this situation by spilling water to each other’s back then brush. I felt hard again when William’s cold chain touching my back. Then came to our asses, we loosen our pants and let the running water to clean our dick and ass. We understand that we must be very careful when we piss as we have to wear the same pants for next few days. After we finished, our T-shirts and pants were all wet, even our socks and boots. It was OK because the weather was still very hot.

After we tumbled back to our cell, we were ordered to climb up to our ‘beds’ and lie down flat. We can take off our boots and the close contact of the ankle shackles with my ankles were great. One guard used a long chain and run it through the ‘O’ ring of our ankle shackle chain to the fixed ‘O’ rings on the bench and padlocked it on the other end. We were all chained up on the bench. The warden told us that this is it for tonight and we will have to start our labor tomorrow. Lights were turned off and I hardly can go to sleep even I was tired as there was no pillows, blankets and one single movement from the chain gang will disturb others as we were ‘linked’. Chuck started a chat; main topics were what happen if we have a fire now and what happen if someone want to go to piss now, but he couldn’t get many chatters as we were all very tired and fallen asleep very soon.

It was a long and exciting day for me, I recalled my arresting scenes before I went asleep. I woke up few times because of the heat, mosquito bites and movement by other chain gang member. I looked forward for my first day of my life of the Chain Gang.

To be continued tomorrow 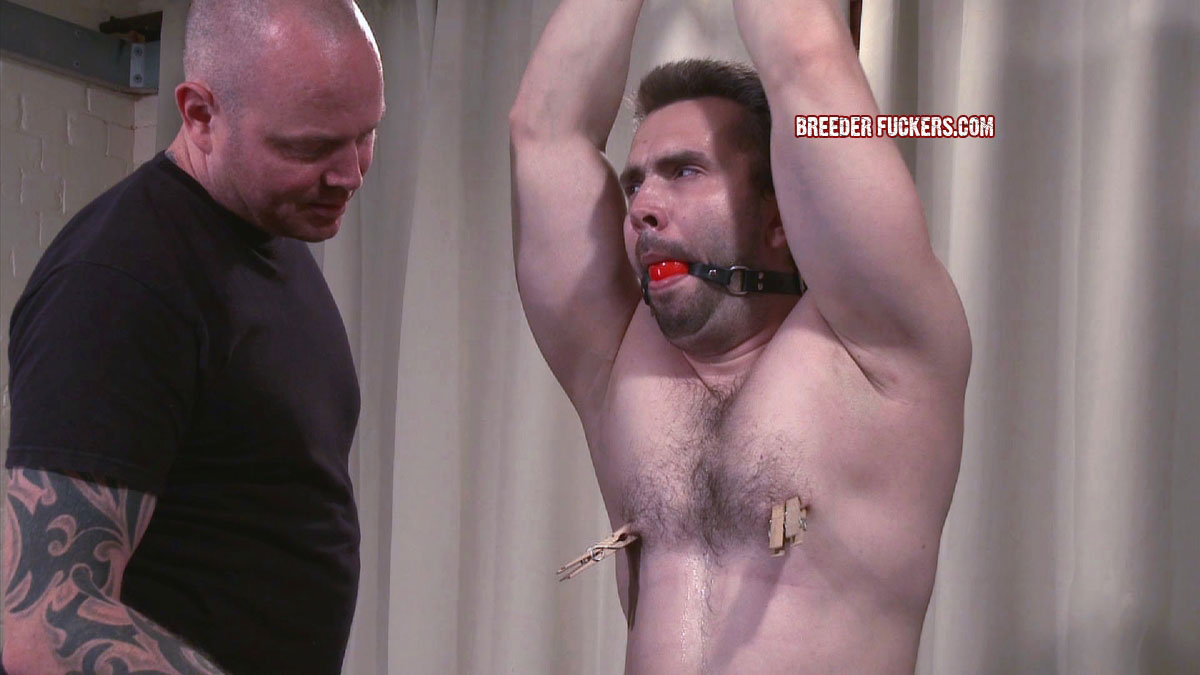