It was a normal work week, work all day, hide at my apartment all night. I made sure I wrote my journal entries, posted my pics on a daily basis. However one busy day (Wednesday) I forgot and left the charger for the ankle device at home. I realized that by about 4 pm when I usually sat down at my desk and plugged the charger in for a fresh charge. It was a good spot to sit as no one would see where the charger cord led to.

When you fail to charge the device it sends a signal to the captor with a low battery alert. Then i get a message on my cell phone — WTF charge your battery!!!!!

I was plenty pissed and also terrified at the same time. I left work a few minutes early-jumped in the car and sped home-not paying any attention to speed limits. I get home, rush to my apartment and plug myself in, had to sit there for over 2 hours for a full charge. Late that night I go to bed around 1130 pm. I live in a large 100-year-old apartment building with big windows facing the street. I am on an upper floor (6) on what is a quiet city street at night. I am laying in bed, watching the ankle device blink (as I do every night).

After a while I notice a green light dancing across the ceiling of my bedroom — at first it thought it was the cable box flashing — but it was dancing all through the room. I jumped out of bed and ran to the window — yes it was a laser beam coming from a Ford parked across the street from my building. When I turned a light on in the room, the car pulled away … was I being paranoid? Or was it him watching my place?

There was an email in my inbox the next morning instructing me to check for another email around noon on Thursday. Sso at lunch at work I proceeded to check the email. The title of the latest email was Offense/penalty and was a list of the infractions in the past month, all neatly arranged in order of occurrence complete with time. Then I checked my website calendar and the 11 pm Saturday meeting was extended to 1.5 hours — with a notice to watch for a new address. There was an additional change in my schedule for the following Wednesday (and he knew I was off that day) – blocking off the time from 10 am to 8 pm on Wednesday. Hmmm what was that about? I don’t think we have exchanged 100 words in person so far.

Saturday afternoon I got a message in regards to the 11 pm meeting that night. The address to where I was to report – which I noted and of course jumped in the car to investigate. The address was at a building in the produce terminal area of the city. It was a garage door of a windowless building – seemed completely deserted. Of course he knew I would check it out and the building was within the driving area he permitted me to drive every day. In fact I pass this building almost every day on my way in to work.

In addition I was to wear tee shirt, sweat pants, and tennis shoes (no underwear). was I to be beaten? Raped? Tortured? I had to be prepared for anything. So when I left my place and got in the car, he surely knew I was on my way. As I traveled down the street near the meeting place, the garage door cranked open, I pulled in and could see his car already in the room. He was in the car – pushed a button and the door shut. He was in black, wearing handcuffs, baton and black paratrooper boots. As I had said before he is a large bear of a guy, and very intimidating.

He waves his baton and directs me over to a corner in the huge garage where there is a low table. He puts me in body chains and cuffs in front and literally pushes me down on the table. Then he pulls out rubber gloves and takes a small box out of his car as I am laid there on the table. He indicates the punishment phase of this control is to be spread over several days. He pokes around me with his baton and then yanks down by sweatpants and pokes my crotch with the baton. He grunts, puts the end of the baton in my mouth, and then says keep your fucking mouth shut. Pulls out the small box – which contains a metal chastity device and padlock, which he has some difficulty installing correctly on my cock and balls. Then he finishes it off with a padlock. He also checks to see how the ankle device is operating, stand up, pulls me by the waist chain up. Removes the body chains and said the punishment phase has begun. No underwear this week and be ready for an uncomfortable day on Wednesday. Now get the fuck out of here. I honestly don’t think there were 50 words exchanged in the entire meeting. I was told to watch my email and calendar for additional information. So now I was being controlled by two devices, and yes I was quickly getting unnerved by it all.

Tuesday morning at work The UPS guy has a box for me, I was not expecting anything, and was unsure about even opening in at work. So late in the day I made sure I was last to leave, and decided to open the box — it was an orange prison jump suit with a note: “Wednesdays required attire”

More to come, feel free to message me gunsukr2@gmail.com, also any Men who need to conduct a prison action of any kind drop me a line, and perhaps something can be set up. 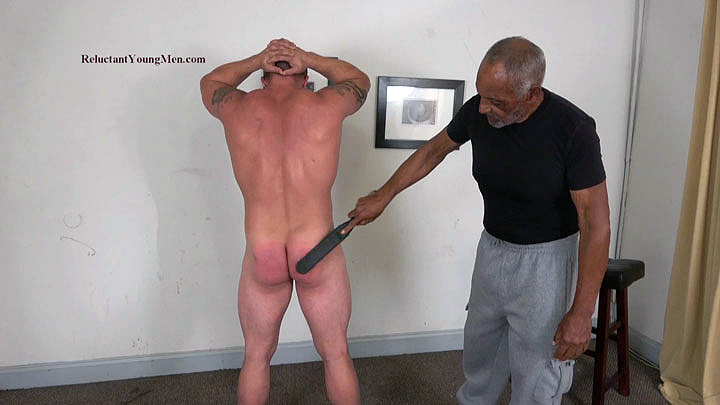