I contemplated how I had failed as I hung there naked, my wrists in heavy metal shackles suspended from the ceiling; my balls stretched taut by a steel ring, connected to a chain attached to the floor. Thus, my body was fixed there in a tight X shape, my ankles being about three feet apart. There was to be no “stopword”, no release, just the enevitability of a severe beating. l was rock hard and awaited my fate.

I had failed the “edging” test: He had bet me, on the pain of a flogging, that I would ejaculate before an hour of His edgeplay had expired. I will narrate here more or less what happened.

We had met in a nearby bikers’ caff several weeks before. Somehow, our conversation had turned to sex, our fetishes and our perversions. I had confided that I liked man-man sadomasochism; fifty-fifty dom or sub. He told me that while he had “subbed” on a few occasions He considered Himself to be mainly a “top”. He certainly looked the part: He rode a Fireblade and wore a leather race suit that exactly matched the bike’s paintwork. As always, He sat outside the caff with His leathers undone down to His navel, exposing His muscled chest and occasionally allowing a glimpse of His pierced nipples. At six foot four, I somehow could not imagine Him ever “subbing” for anybody!

We had agreed to meet at His place, situated somewhere remote, to the north of Chatteris, in the heart of the Fens.

I loved those sweltering hot summer days: they enabled you to ride your motorbike dressed in leathers without any undergarments. If sexplay was on the cards you could arrive sweaty and smelling of leather. Sex or fetish play would be fun if both participants’ bodies were heavily drenched in perspiration.

I parked the bike onto His concrete driveway. He obviously heard the engine as He was waiting at the side door. ‘Come round the back!’ was all He said. He led me into His enormous rear garden and down into a large barn-like brick outhouse. I gasped with surprise upon entering: He had equipped the place like a torturer’s dungeon. Hanging from the vaulted ceiling were chains, hoists and pulleys set at varying heights. Cemented into the floor were heavy iron rings replete with chains and shackles. There were also vaulting horses, a whipping bench and a medieval looking torturer’s rack. Hanging from hooks in the wall were various whips, cats o’ nine tails, canes and leather tawses and belts; ball gags and rubber penis gags; electric wires and pads, connected to what looked like a hand cranked generator.

‘Strip completely!’ He commanded. I did as I was told, standing there completely naked, having laid my bike gear and boots on a table in the corner of the building. ‘Stand there and arms up!’ He pointed to an area under one set of the shackles hanging from the ceiling. Having done that, He fixed my wrists in the shackles so that my arms were positioned more or less at right angles to each other. He then selected a metal split ring with a chain attached from one of the wall hooks and yanked my testicles hard down into their sac, enabling Him to fasten the ring around the neck of my scrotum. I grunted as He tugged on the chain, fixing it to one of the rings on the floor with a stout padlock. Thus, I was totally unable to move, risking castrating myself if I tried. He remained clothed in His race suit, unzipped down to His pubic hair.

‘Now, let’s see if you can resist cumming boy!’ He said. ‘If you do shoot, see that single tailed whip over there,’ He pointed to one of the hooks, ‘I will deliver thirty lashes at full force across your back and arse. You will then fellate me by way of thanking me. However, if you should pass the test and not shoot, you will suck me off anyway, and if I am feeling generous, l’ll give you a really brutal wank by way of thanks. If you don’t want to play, say so now, I’ll unshackle you and then you can fuck off. If you agree, you also agree to no stopwords; it’s all or nothing.’ Upon hearing this, my cock hardened and stood vertically, stretching my scrotum further.

He disappeared for a short while then returned carrying a tube of lubricant. Applying this generously to His hands He grabbed my erection and very slowly but firmly ran His fist up and down the length of my shaft. I groaned and gyrated my hips as much as the shackles would allow. Faster and faster He wanked me and judging by by rate of my breathing He stopped for a second or two. Next, He ran His greased fingers up and over my glans, lubricated now by a mix of His grease plus my precum. Faster and faster and harder and harder He ran His fingers over my cockhead, while with His other hand rubbed then penetrated my anus, eventually working His finger in until it found my prostate. I grunted and bucked to and fro, ignoring the pain from my stretched bollocks. ‘Only five minutes have elapsed, boy,’ He said, ‘Plenty more to go!’

His hand returned to my cock. He wanked me harder this time, stopping only when He judged that I was on the point of ejaculation, with a finger of His other hand still massaging my prostate. ‘Please, Sir, no more!’ I begged. Of course He quite rightly ignored me and continued his ministrations.

By this time I was almost weeping with lust. I tried thinking of anything, sexless things, to take my mind off His torment. Wooly pajamas and horrible carpet slippers came to mind. Vomiting after several too many drinks also popped into my head, as did having diarrhoea. Nothing helped: my mind was on fire, thinking about ejaculation.

He suddenly withdrew His finger from my anus then swapped hands. His wanking hand then found my erect nipples and He worked each one in turn, tweaking and twisting them harder and harder. I let out a cry: ‘No more Master, please!’ Of course He ignored me and continued torturing my nipples and cock.

‘You have lasted twenty minutes boy!’ He said as His fingers again massaged my glans. This time, He tickled my constrained balls with His other hand, giving my sore nipples a break. I was becoming delirious; my mind somehow entering that subspace. Endorphins, I have been told.

Suddenly He stopped and let go of my body. I will be honest I breathed a sigh of relief. ‘Another half hour to go; let’s see if you can last this one!’ He said as he walked over to the hooks and selected a vicious pair of nipple clamps, which resembled a pair of car battery charger clips connected to each other by a heavy chain. I yelled in agony as He applied them to my inflamed tits and tugged the chain, while returning to masturbating my rock hard erection. At once, He tugged the chain and ripped the clamps off my nipples. I let out an agonised scream. Grinning again, He reapplied the clamps at right angles. I almost passed out.

Leaving the clamps in place He turned His attention once again to my cockhead, now dripping copious amounts of pre-ejaculate. He cupped the secretions in the palm of His hand and offered them up to my mouth. I licked it up greedily. ‘What do you say boy?’ He said, suddenly tugging the nipple chain once again.

‘Th-thank you Sir!’ I stammered as He continued massaging my dripping glans.

‘Hmm! Nice abdominal muscles boy!’ He said, running His other hand up and down my heavily perspiring torso. Still rubbing my cockhead He launched His other fist into my gut, causing me to buck and nearly castrate myself. He laughed and said ‘Fuck boy! You really are a tough cookie! Most of my subs would have shot their load long before now!’

He let go of me once again and fetched a steel weight connected to a butcher’s hook from a table in the corner. Without any preamble He hung the weight on the hook from my nipple chain, letting it drop several inches. I howled in agony.

‘Fifty minutes you have lasted boy! You failed!’ He said as He removed the tit clamps and roughly massaged my excruciatingly painful nipples. ‘I will leave you to recover for a few minutes then you will be flogged as l have said. I’ll bring you some water that you can drink through a straw. Back later!’ He said as He left the building.

I could feel my penis hardening once again.

After a few minutes He returned, this time dressed in calf length highly polished black leather boots, black leather jeans and a tight white singlet that accentuated his muscled torso. A cruel looking single tailed braided leather whip hung over His left shoulder. As He had promised, He carried a large plastic beaker of water replete with drinking straw. This was welcome because if anything, the temperature in the outhouse had risen further, causing me to literally drip with perspiration. He held the straw up to my lips and I drank more or less the whole lot.

‘You will moisten the whip with your tongue, boy.’ He said, placing the end of the whip into my mouth. Slowly He drew the whip’s length through my lips until He reached the handle. I shook in a combination of fear and lust as He dangled the now glistening leather in front of my face; so much did I want to feel the stinging burn of it, thirty times, across my naked back. 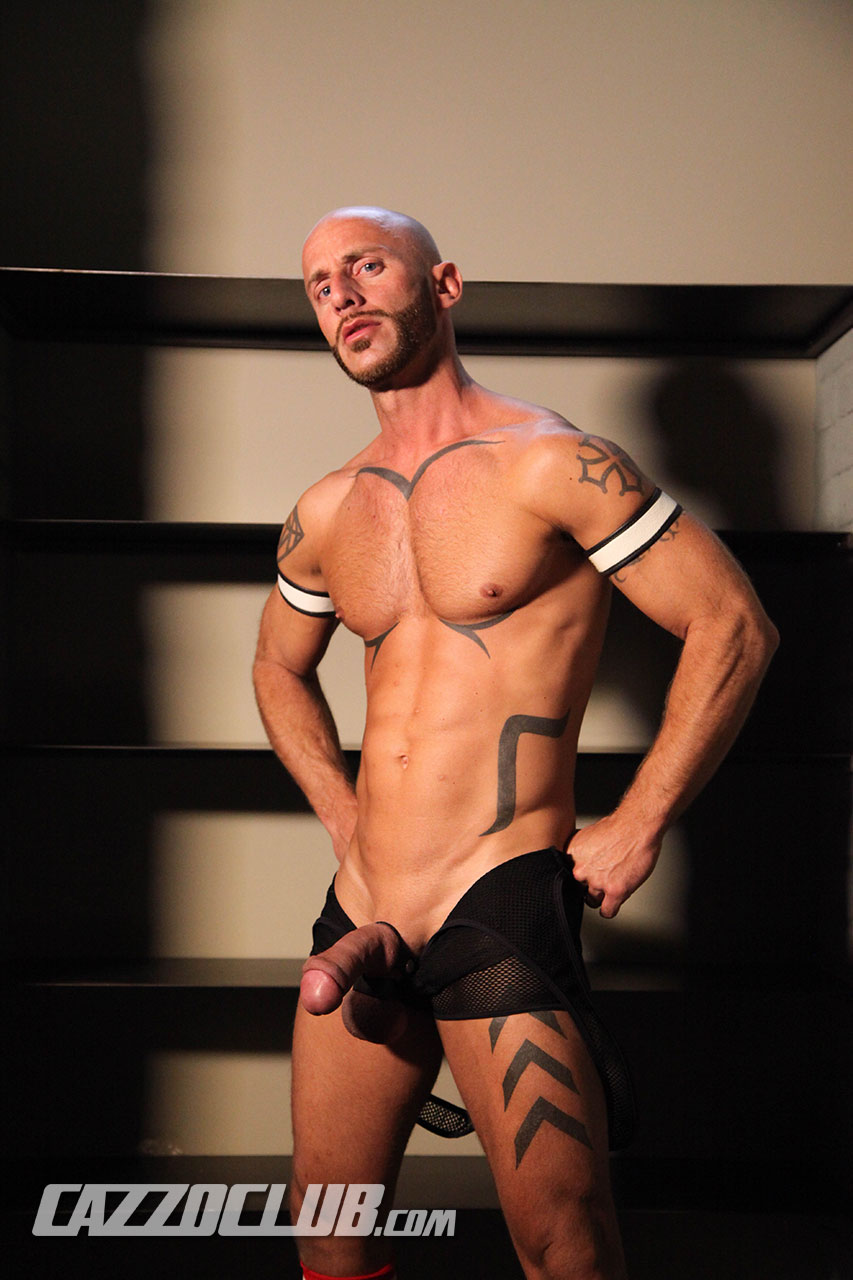