Jaz opened his eyes, or at least thought he did. It made no difference to what he saw. The soft, cushioned leather blindfold stopped even the merest chink of light from penetrating his darkness. He felt around him as far as he was able to, being restrained in a somewhat loose spread eagle by wrists and ankles to the bondage bed with just enough wriggle room to prevent cramp setting in.

The restraints were expensive leather ones with the same sort of cushioning on their inside which held you tight without pinching or chafing, a bit like having four strong, warm hands holding you in position. He moved slightly and felt the contrast of the cool rubber surface of the bondage table as opposed to the hot sweaty area his body had made throughout last night.

The night? Was it now really morning? Jaz had no way of telling. Even without the blindfold the playroom could be pitch dark being, as it was, ten feet below the living room floor, the only daylight coming into it from the top of the stairs if someone had left the hall door ajar. He had slept, but for how long? They had played for what seemed like hours and hours, he and Harrison. H, as he liked to be called, had certainly demonstrated his expertise during that time. Jaz saw nothing and could protest little, the inflatable pecker gag putting paid to conversation that was more than a squeal, moan or swift noisy exhalation of breath.

He remembered the warm oil that was massaged into his whole body, the slickness of the rubber under him as drops of oil ran in small rivulets from his chest, abs and between his balls and thighs. H pressing his fingers and palms into his muscles, easing out any stiffness, just as efficiently as it increased the stiffness in his cock. H cupping his oiled hands around Jaz’s erection and gently edging his partner. The tit torture and the giggling as H couldn’t get any of his clamps to stay in place and had to wipe his handiwork off Jaz’s tits before the clamps would hold. H taking exception to Jaz’s laughing and punishing his partner with the flogger.

Then the kissing all over, the blow job, the fucking, the long strokes of H’s thick 8 inches, Jaz moaning softly as he felt every inch penetrate his ass in that rhythmical slow swinging action H so enjoyed.

He pulled involuntarily at his restraints, forgetting for a moment that he wasn’t going anywhere. He now wanted to piss. Badly. The gag had long gone as per their habit of never gagging someone and leaving them, especially overnight, so he simply yelled.

No sound in response. He would hear if the cellar door opened and the creak of several of the stairs when anyone used them.

H!! I NEED A PISS! C’mon dude. I’m just about leaking here. You know we both hate that sort of mess.

Still no answer, no movement.

The silence seemed to be louder than his voice.

Jaz swore to himself and then much more loudly. He wriggled without getting anywhere, yelled and threatened the things he’d do to his partner when he laid hands on him, forgetting the 3 or so inches H had over him as well as his solid build. Jaz was no wimp but he was certainly not likely to win a physical argument with H in any way that was fair.

There comes a point when you run out of alternatives and Jaz had reached that point. He had no idea where H was, if he was still in the building, if it was still night and H was asleep 2 floors above. So he reached for the bell push. They had had it installed for dire emergencies only. Pressing it rang a bell on both floors of the house, loudly. It was agreed never to use it unless it was a real emergency on pain of forfeit, usually a chastity cage for a “time to suit the crime” was the general suggestion.

He pressed it and heard it ringing above him somewhere, knowing that H would immediately arrive at his side to find out the cause of the panic.

He began to swing between anger, frustration and fear. What if something had happened. Was H alright. He couldn’t see, he couldn’t move more than a couple of inches. He was sweating and beginning to panic. He’d forgotten his need to piss, that is until he calmed himself down and the need hit him again, at twice the original strength.

He screwed up his face and tried to let loose.

Nothing. It felt like it did when he first tried to piss inside his wet suit. Unnatural. He had to force his brain to let the flow begin.

So he repeated that feeling. He expected the warm liquid to pool around and under him. With an effort he finally felt his cock expand slightly inside as the piss found its route to the outside world. But nothing. He was emptying himself but not getting wet. It was then he felt the slightly unusual warmth on his cock that he hadn’t noticed before. He had sore tits from H’s eventual use of fingers and also some evil clamps that had got him yelling through the gag, sore chest, abs and tops of his thighs from the flogger H swung a couple of dozen times, he thought maybe one or two flogger tails had caught his cock which would account for what he felt between his legs.. Up till now.

It was then he heard the laughter.

“What the FUCK man! I’ve been yelling myself hoarse, pressing the bell, and where the fuck were you? Why didn’t you answer, where …. Fuuck, just fuck.”

“Easy, Jaz,” said H through a few final bouts of laughter. “I’ve been here most of the time. We played until gone 3 this morning so I simply pulled down that old mattress from where we had it standing against the wall over here and fell asleep.”

“Your cock?” H finished Jaz’s sentence for him. “I just shoved one of the exterior catheters on you while you were asleep. I didn’t want to have to release you too soon and knew what you felt about golden showers, even your own. I thought you’d be aware but obviously you were too far gone.”

“Yeah well, take that to be your punishment for using the bell,” said H, grinning far more widely than he should. So. You want out now you’ve half filled that bottle?”

Jaz cursed a bit more, only stopping when H stepped over to the bondage table and, pinching Jaz’s right nipple between his finger and thumb, covered the man’s mouth with his own and felt their tongues dance. Pulling back H rested a hand on Jaz’s chest. “So, if there’s nothing else I’ll go back to bed for a while. Our bed that is, not that old mattress. And don’t forget, ring if you need anything.” 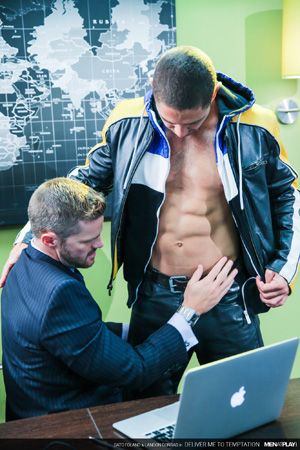 One thought on “Jaz and H”