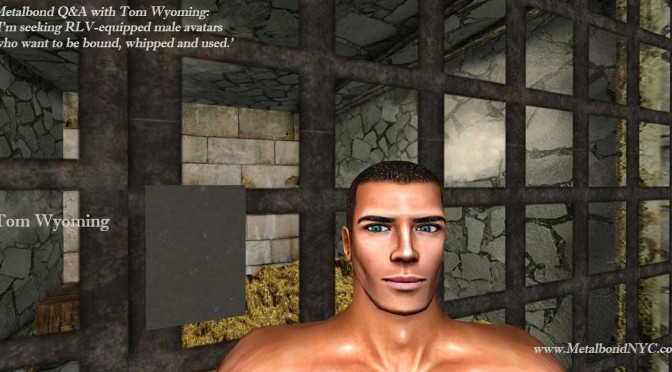 In an interview with MetalbondNYC.com, Tom Wyoming, proprietor of the infamous Tom’s Prison in Second Life, discusses his interests in bondage, corporal punishment and rough fucking — as well as what it takes to make a good virtual role-play scene possible. Hi Tom! Please introduce yourself to Metalbond readers, and tell us how to find you and what you are into.

You can find me in Second Life, where I have been for slightly over three years. I’m known in SL as a sadistic prison guard who gets turned on by welted backs and suffering prisoners.

For those who might not know, what exactly is Second Life, anyway? Is it a game?

Some consider Second Life to be a “game,” but in some ways it is more like a social media site, in that nearly all content is user-created.

Does it cost money to participate in Second Life?

You can participate in Second Life for just the cost of your Internet connection and computer hardware. There are enough “freebie” items in world to get started, but most players want to buy a nice looking skin and clothes for their avatar, get some really cool toys and get a virtual lot that they can build a permanent custom home on. Of course you can build your own toys and apparel, but there is a learning curve.

What are some of the things kinky guys can do in Second Life?

Anything that your perverted imagination can come up with! Cuff your prisoner and lock him up in a cell. Tie him to a whipping post for 50 lashes.

Oh really? You mean there are restraints, cages, bondage, whipping?

Yes, all sorts of fun toys, such as whipping frames, cages, cells and restraints can be purchased or built. As far as restraints go, “Open Collar” RLV cuffs are available for free, so at lot of people use that flavor.

RLV stands for “Restrained Life Viewer” or “Restrained Love Viewer.” The major advantage is that the sub’s avatar can actually be restricted in many ways. When locked in an RLV cell running an RLV viewer, he won’t be able to “teleport” out or otherwise escape. The top can bind the bottom to an object without having to ask. The top does not need to use it, he just has to be familiar with the cuffs and collar that the bottom is wearing and what items in-world that are RLV-compatible.

I have heard that you, Tom, have quite a reputation in Second Life as a serious, heavy player. What else can you reveal about yourself?

To quote from my profile, “I’m seeking RLV-equipped male avatars who want to be bound whipped and used. I decide when you have had enough. Be warned that I’m very sadistic here in SL …”

What is Tom’s Prison?

One of the first things I looked for when I joined SL was prison simulators. As it turns out, nearly all where heterosexual. They were also all modern prisons where corporal punishment was not realistic. As a matter of fact, some of the het prisons specifically say it is to simulate a modern prison where the only punishment might be solitary confinement. So I set my prison back in the first century, where a good whipping might well occur. The sword and sandal movies of the 1950s were my inspiration.

I prefer muscular avatars, but not crazy overdone bodybuilders that are unrealistic. Good role-play ability is also nice, and I have to admit, I’ve met players I’ve learned a lot about roleplay from.

It would be nice to have enough people at the prison to keep a 24/7 simulation going, however with SL players spread all over the world and limited interest (the most popular gay sim is one that is totally focused on back-alley sex with little BDSM), I finally had to give up on that, so the prison now runs as a “playground,” where doms can take their subs to whip them, tie them down and fuck them, then throw them in a cell. I do have a couple of “lifers” who are really into total confinement and control, and our online schedules match well enough that we get to interact a lot.

Metal would like to thank Tom Wyoming for granting this interview. Here are some pictures that Tom shared from his prison in Second Life: