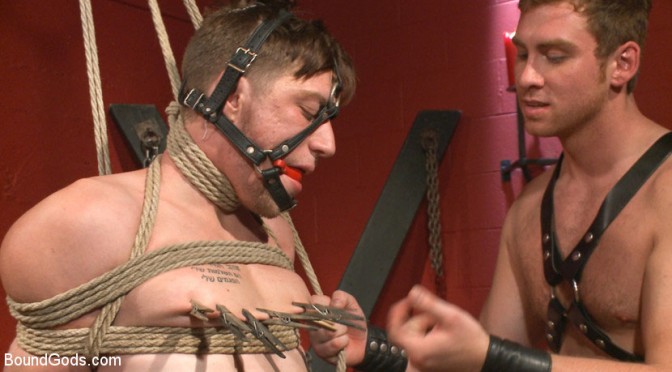 In this video from the gay bondage site Bound Gods, Connor Maguire pulls his fuck toy out of the box and torments him till finally giving him the deep dicking Logan Taylor has been begging for. Click any of these pictures to go directly to this video. Connor Maguire wakes from his slumber, feeling horny and ready to torment his newest plaything. Connor walks over to his footlocker and pulls out a trembling Logan Taylor. Logan worships Connor’s boots and endures a paddling. Next, Connor pulls Logan onto the bed, tying a rope to the captive’s neck. With his chest covered in clamps, Logan takes Connor’s dick deep inside. The torment continues as Logan’s body is bound spread eagle and flogged. Connor again reams Logan’s asshole and covers his plaything in a hot load. Satisfied with the pain Logan took through the night, Connor milks a load from the stud’s cock before placing him back in his box and returning to sleep. See this video by clicking here