Paul woke up abruptly in his bed, confused and worried by the intense dream he’d had the night before. His head buzzing, he went and ran his shower colder than normal and as he stood under it he ran through his dream.

It started in his house, with someone spraying something in his face. As he fell to his knees, he looked up to see a bulky guy dressed in black combats leaning forward and locking a thick leather collar around Paul’s neck. Paul tried to speak but seemed to be unable to. The man was joined by three others, and together they manhandled Paul out the door. He tried to struggle, but his limbs didn’t seem to be working. Outside, the men bundled him into the back of a van. Paul found himself helplessly sprawled on the floor of the van as it pulled away.

He couldn’t tell how long the van journey was – in his dream he seemed to fade in and out. Each time he woke up, something had changed. Firstly, his shorts had been removed. Then they were replaced with a skimpy black leather jockstrap. White rugby socks had been rolled onto his feet, followed by highly glossed DM boots, which were tightly laced in place. The men then sat him upright, adding a sizable metal padlock to the front of his collar. They then twisted his hands up behind him and secured them to cuffs, which dangled from the back of his collar. Finally, a rubber gag shaped like a small cock was slid into his mouth and secured behind his head.

After this had been done, the van halted and the back doors opened. A heavy chain leash was clipped to the front of his collar and he was led into an alley. The men led Paul through a shabby black door and into a dimly lit corridor. He was then led into a room where five other men secured like him were stood, all looking confused and semi-drugged. His leash was attached to a peg high on the wall and the men left.

The six men stood in the room for several minutes before the door opened again. Framed in the door was a huge man – 6ft6” tall, hugely muscled. His body was cleanly shaved and had been oiled to make his muscles stand out. Nothing of his face could be seen except his chin and his eyes which sparkled behind a black leather half-mask. He wore skin-tight leather jeans, knee-high Dehners and a thick studded belt. On his wrists were thick studded leather bands which matched the belt. Grinning, he strode into the room, collected the six leashes and led the six men outside. Going the other way down the corridor, he led them into a packed nightclub.

Paul’s dream then became a nightmare of lights and sounds, pounding beats and flashing strobes. As he was led around, his crotch was tickled, grabbed and fondled, his muscles were stroked, tweaked and massaged and his arse was slapped and fondled. At some point he became aware that there were no women in the club. The giant who led him in left him, his leash locked to the bar, where Paul became the centre of attention for a group of semi-naked men.

As their hands fondled him, their tongues licked him and their legs rubbed against his, Paul realised that he was becoming aroused – something which could not be hidden in the skimpy jockstrap. As they became aware of his predicament, they teased and played with him further, laughing and yelling to each other over the base blast of the music. Paul tried to pull away but couldn’t and as he looked around for help he saw one of the other men in a similar predicament. At that moment, one of the men around Paul slipped to the floor behind him and he felt a finger invading his arse. With a gagged roar he tried to pull away, but hands bore him back and he stood there, knees shaking as the finger pushed further in and out, in and out, till it was joined by another. Humiliated, but aroused beyond thought, Paul’s cock erupted out of the jockstrap, spewing cum over his appreciative audience. Then the dream ended.

Paul shuddered in the shower as he thought of the bizarre dream. What on earth had put something like that in his mind? Turning the water off, he walked back into the kitchen while towelling himself down. Opening the fridge, he took out a protein shake and the familiar taste seemed to wipe away his concerns. A good workout would sort him out. Grinning, Paul went to get his workout kit, ignoring the fact that somehow the bondage shorts had disappeared and lying beside his bed was a black leather jockstrap.

All rights reserved. This story may not be reproduced or used in any manner whatsoever without the express written permission of the author.

Metal would like to thank lthr_jock for granting permission for this story, which has previously appeared on other websites, to be re-posted here. 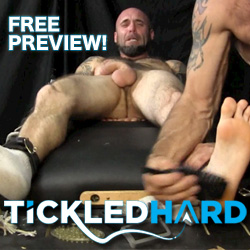