Start your new year off right with this 14-part story by lthr_jock: 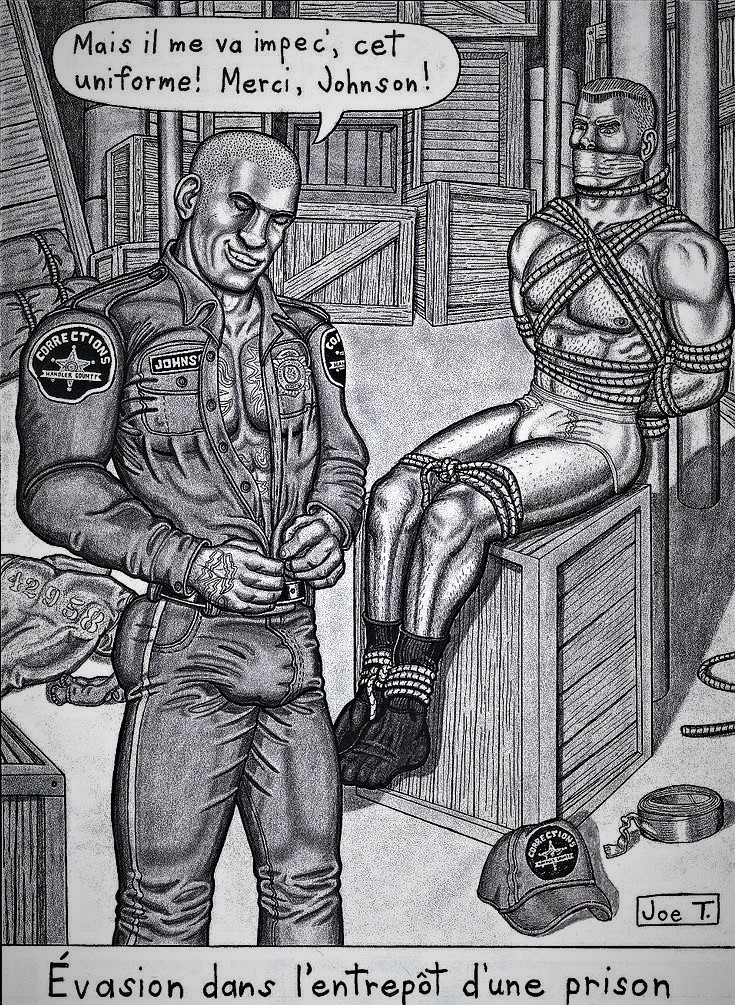 As it slowly pushed in, all Brian could think was how violated he felt, how helpless – and both those things increased his arousal even more. At that point, Dave walked in with two customers. “As you can see, today we have Brian modelling some of our gear. Say hello Brian.” Brian grunted angrily into the gag. “There we have him demonstrating how completely the gag works on the deluxe muzzle.” The two men with Dave looked Brian over appraisingly, almost as though he was a shop mannequin. Dave continued with his sales patter before leaving the men to browse.

END_OF_DOCUMENT_TOKEN_TO_BE_REPLACED

Brian was feeling highly aroused – which was very clear in the tight leather trousers. He headed back to the car where he stowed his new purchases before grabbing his sports bag and heading into the gym.

After taking his supplements, he started working out. As with yesterday, time seemed to fly by. He found himself pushing heavier weights than before and by the end of the session, he was dripping with sweat. As he looked at some of the massive guys in the gym, he knew that he wanted to be their size – or bigger. He headed for the locker room, where he sat for a couple of minutes with his towel around his shoulders. While he was sat there a man walked in – hugely muscled with a t-shirt plastered across his torso that said “Personal Trainer”. He walked up to Brian and held out a hand. “Name’s Chris. Saw you here yesterday too. Mind some comments on your style?” “Not at all – what am I doing wrong?” Chris sat down and went through some things with Brian that should improve his technique and then went to leave. “Hey Chris, how much are personal training sessions?” “£50 an hour.” “Seems reasonable. I’m only in town for 2 weeks. Can I book you for 2 hours each evening?” Chris nodded – it was always good to have regular bookings like that. “Definitely, Brian. What time tomorrow?” Brian thought about the meetings he had scheduled. “6:30?” “Ideal. See you then.”

Brian smiled to himself – this trip was proving far better than he had thought it would. He took a leisurely shower, then changed and headed back to the hotel, enjoying the way his new leathers creaked and stretched as he moved. When he got back to the hotel, he ate in the dining room and spotted several people eyeing his leather trousers. He enjoyed the attention and made sure to stretch when he left so that they could get a good view. He then headed to bed, lulled asleep by the blu-ray.

END_OF_DOCUMENT_TOKEN_TO_BE_REPLACED

At that point the buzzer sounded, indicating there was a customer at the door. To Brian’s surprise, Dave didn’t release him, instead going over to the counter, checking the CCTV and then buzzing the customers in. Brian flushed red with embarrassment as three men came in. He tried to look inconspicuous, but they spotted him and pointed at him with a chuckle. Dave headed over. “Don’t mind them. Let’s just get you somewhere more discrete.” Dave grabbed the leash again and led Brian back into the rear room.

He took him right to the back of the room where there were several heavy and cumbersome items of dungeon furniture. He swung the door of a steel cage open. “Get in.” Brian looked at him in shock. “I have to deal with the customers, so you need to be stored. Get in.” The cage was a dog cage, so Brian had to get onto his knees and shuffle in. Dave grinned and locked the door behind him, then threw a sheet of soft leather over the cage. “Stay.” Brian then heard the sound of his steps as he walked away.

Brian tried to get comfortable, but with his hands locked behind him there was a constant stress on his arms and chest. The gag was making him drool and a constant stream was now dripping onto the floor. But the thing that did surprise him was the way that his cock remained rockhard. He could feel it trapped between the leather and the skin of his leg. He found that if he rocked to and fro, he could get more traction on it and he soon found himself very close to cumming. He was stopped as the leather sheet was removed and Dave grinned down at him.

END_OF_DOCUMENT_TOKEN_TO_BE_REPLACED

Brian Watling exhaled sharply as he completed his last bench press and put the weights bar back in place. He sat up, grabbing his bottle of water and his towel as he sat for a moment before standing up and stretching his aching muscles. As he did, he looked at himself in the mirror – for a 53 year old man, he was doing pretty well. At 6ft tall, he still retained a good deal of the muscle mass from his youth. Regular workouts had ensured that he didn’t put on the paunch that so many of his colleagues had developed and a couple of minor operations had ensured that he retained a good head of hair. Most people assumed he was in his late 30’s – until they considered that he had been the chairman of Watling Inc for over 20 years.

Brian headed for the showers but before he could get there, the intercom chimed. “Sorry to disturb you Mr Watling but your son is here to see.” Muttering a curse, he wondered what that useless parasite wanted now. His only son had been a constant disappointment to him, more interested in lazing around than hard work. As a result, Brian had kicked his son out three years ago and now lived alone in the sprawling mansion. “Tell him to wait in the drawing room. No, wait, send him through. Let’s get this over with.”

He took a long swig from his water bottle and sat down on the weights bench waiting for Geoff to arrive. The door to the gym swung open after a few minutes and Geoff walked in – both shorter and less muscular than his father, he reminded Brian of his long-deceased mother. As usual, he was wearing what Brian though of as chav couture – shiny black Adidas tracksuit and baseball cap and undoubtedly ruinously expensive trainers. Brian sighed. “Geoff. What do you want?”

END_OF_DOCUMENT_TOKEN_TO_BE_REPLACED

PC Keith Phillips checked his watch and sighed – still an hour to go before the end of his shift. Tonight had been a long, frustrating evening and while he had been busy earlier, the last couple of hours had been quiet and he had been patrolling on foot on his own. The usually busy streets were empty due to a combination of a fine drizzle and the fact that it was three days before Christmas. He sighed again as he turned to head back towards the station. On nights like this, he really wished he had a police dog to keep him company.

Keith took out his phone in the forlorn hope that someone would have texted him – no luck. Everyone he knew apart from work colleagues was probably asleep. As he resigned himself to a miserable trudge back through the silent streets, he caught sight of a car’s headlights shining out from a garage block. The block was at the end of a narrow, darkened lane and he had often found people up there shooting up. At this time of night, any light was unusual so he squared his shoulders inside his stab vest and walked up the lane.