Zac crashed for the next few hours with good reason. After spending the night locked up in a set of transport shackles and then spending some time chained up to the basement post, he was beat. It was noon before he hit the shower and headed out to run a few errands for the day. It was a scorcher that afternoon so he opted for his cargo shorts, his favorite snug fitting navy Under Armour Just Saying sleeveless tank and his worn low Chucks. It was almost dinner before he got back and he noticed Nick and Daniel kicking around a soccer ball in the front yard, their shirtless physiques glistening with sweat in the late afternoon sun. Zac was pretty cut himself, but he admired Nick’s physique, the muscular trimmed hairy chest that looked bullet proof. With his two bags of new workout clothes in tow, he headed over to chat with the men and soon found himself engaged in the battle of the soccer ball.

By the time it was over, it was a sweaty mess of three muscular hunks.

“Think it’s time for showers, boys, and firing up the grill. Got some great steaks marinating in the fridge. Stay and join us, Zac.”

“Cool, I’ll run back to the house and get cleaned up. About 30 minutes?” said Zac.

“Screw that. Use my guest bedroom’s shower. You’ve already got something to change into.” Daniel said.

Zac and Daniel hit the showers while Nick waited for one to free up. Daniel was out first, so Nick took that one while Daniel laid out Nick’s evening attire of cargo shorts, jock, black compression tank and flip flops. With the jailhouse having been locked on since last night, Nick was getting pretty horny at this point. Not being able to truly feel his cock, he noticed that the water spraying from the shower head making its way through the rings of the cage provided a torturous sensation because it felt good while at the same time caused his cock to fill the prison cage.

The guys were hanging out on the back deck after a great steak dinner enjoying a fresh bottle of merlot when Daniel, out of the blue, turned to Zac and said, “anytime you want to borrow that transport set to wear around the house, just let me know, boy.”

Zac nearly spat out his fresh sip of wine out at the unexpected remark and Nick couldn’t help but grin at the thought of Zac locking himself up in the set while hanging out at his house. But Zac had some news to share with the boys that night.

Zac had one year of college left and decided to commute to the regional campus which was only twenty minutes away instead of living at the main campus several hours away. This allowed him to save money and work a part time job locally in his field to gain practical experience. Everything was all set until his dad got a job transfer out of state. This meant that Zac would have to get an apartment, thus wiping out any money he would have saved.

“Yeah, it sucks. So now I’ll have to get an apartment and I won’t be saving much of anything.”

“Heck, I’ve got an extra room in the house, Zac, why don’t you just stay here? Tell you what, you help out with the yard and around the house and you can stay for free your final year. It’ll be nice having some extra company, too.” Daniel said.

That caught Nick off guard considering his sleeping arrangements in the cell all these months. He wondered how all that would change if Zac was living there. Nick had also grown to enjoy time in the cell and being locked up in shackles from time to time while in the house. ‘Damn, I’m locked up in this chastity cage, too!’ Nick thought to himself. ‘Things will certainly be different around here if Zac moves in’.

Daniel had another reason for offering Zac room and board as he knew it would present the possibility of seeing him locked up more frequently. Heck, he already had the boy interested in steel, so he was sure he could get a chain collar padlocked around the boy’s neck by Thanksgiving break if things work out.

Things moved along pretty quickly. Zac’s parents moved out of state and Zac had his things in Daniel’s spare bedroom…the one that Nick slept in that night where he found the orange prison jumpsuit in the closet. Daniel had cleared out much of the closet that held his special gear, but left a few specially chosen boxes on the top closet shelf, hoping that a curious Zac would take a peek inside at some point.

As expected, Nick moved into the second bedroom and didn’t spend his nights in the cell downstairs once Zac moved in, but he did remain locked in the jailhouse chastity device and was required to sleep in a pair of Peerless leg shackles at night. It was only a couple weeks at that point and his balls were full and he was climbing the walls…he kept thinking about was how good it would feel to touch his cock again and jack off.

One early morning that Fall after Daniel had already left for the weekend to visit a project two hours away, Nick, half awake, shirtless and craving some juice, wandered off to the kitchen, not thinking about the fact that he was still wearing the Peerless leg shackles that he had slept in. He had been so accustomed to them and it didn’t occur to him that Zac would still be there since Zac normally had an early class schedule on Friday but his first two classes were being conducted on-line.

Zac had wandered from his bedroom to the kitchen and saw a shackled Nick taking a swig of juice. “What the hell, did Daniel lock you up before he left?” Zac laughingly said.

“Oh shit, I didn’t know you were still here.”

“Yeah, no worries, stud, guess you just can’t get enough of the steel, huh.” Zac said with a chuckle. Joking aside, what Zac really thought was how hot Nick’s powerful hairy legs looked in the Peerless leg shackles. ‘No, wait, why am I thinking that?’ he thought to himself.

“So what’s the deal, Nick, you just felt like walking around in leg shackles this morning?”

Nick figured he’d just sort of tell it like it is. “Well, they were sitting on the closet floor last night and I don’t know, just tried them out and fell asleep with them on. I was craving juice so bad when I got up, I didn’t bother to grab the keys sitting on the nightstand to unlock them. Guess I better go do that, huh.”

“LOL, well, don’t take them off on my account.” Zac said. And with that, in a split moment’s decision, he made a mad dash to Nick’s room and grabbed the Peerless keys. Nick didn’t stand a chance trying to run after him.

“OK, OK, very funny, now hand me the keys so I can take these off.”

“I don’t know about that, bud. Seems to me that since you locked yourself up, you must like this, and you wrapped up a project last week, so you don’t have to be anywhere today. Tell you what, I’m headed to the library and then my classes, so I’ll be back in about four hours, and I’ll give you the keys when I return.”

Nick wasn’t worried, but he didn’t want to let Zac get that impression. He played along with Zac’s little game, knowing all to well that he could find a key in Daniel’s closet full of metal gear. Zac soon left and Nick quickly found keys and grabbed his shower, his frustrating shower, they all were now that he was still in the jailhouse chastity. Once dressed, he grabbed the transport set that Zac had gotten himself stuck in not that long ago, and thought about his plan of attack for when Zac returned.

When Nick heard Zac pull up, he was ready to make his move.

“Hey Nick, where you at, buddy? Ready for me to set you free, or do you want to stay locked up a while longer?” he said with a sarcastic chuckle.

“I’m in my bedroom. Get your sorry ass in here and take these off, will ya?”

Nick was positioned by the door and it was too late when Zac saw him. It was no match really, Nick had Zac overpowered and locked up in the transport set before he knew what hit him. “What the fuck? How did you get out of those?”

Once a boy scout always a boy scout. Found a spare set of keys that fit. Now it’s payback, college boy and if you’re a good boy, I may set you free after 24 hours. If you cause me any trouble, I may just have to lock you away for the night. That last threat sparked something in both boy’s crotches. Nick knew exactly what that threat could mean. Zac didn’t, but the threat sounded hot for some strange reason.

“OK, funny, you showed me that you could get me, I get it. You can let me out now.” Zac said trying to sound convincing. Truth was he liked the transport set and thought about the set often after that night he was stuck in them. But he didn’t want to let on.

“Oh hell no, college boy. Best get used to ’em, because you’re not getting unlocked for 24 hours. Told you payback was a bitch. Oh, and you won’t be finding any spare keys.”

Zac managed the first few hours without griping much, but he did have to ask, well plead, with Nick anytime he needed something that was out of reach due to the connecting chain. Without being able to do much at all, he lounged out on the rear deck and sucked down a few beers to kill some time and it didn’t take long at all being on an empty stomach to get a little cocky and kept after Nick to unlock him as he was sure he learned his lesson. But after about the twentieth pleading, Nick decided to teach him another lesson and fetched another set of leg shackles and cuffed Zac’s left leg to one of the deck’s rail support posts.

“I’m ordering us a pizza. You can hang out here for a while so I don’t have to hear you ask me to set you free anymore. You’re in it for 24 hours, college boy, best get used to that fact.”

At this point it should have been Zac wearing the jailhouse chastity cage because as soon as Nick locked on that secondary leg shackle, he was sporting some serious wood. 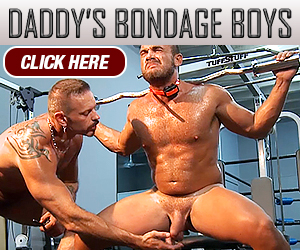