If you travel over the rough Santa Lucia Mountains, past towering Cone Peak, and away from the white water Big Sur coast, you come to set of broad oak studded valleys and chaparral covered ridges descending eastward toward the Salinas Valley. The Bear Trap is named for a box canyon among the ridges where oaks stud the grassy north facing slopes and brush and ghostly grey pines the sunburn south faces. Long ago, Mexican vaqueros would lure grizzly bears into the steep sided “trap” with live bait, such as a steer, to be roped and killed.

The ranch in that canyon is accessed by a 7-mile dirt road, and no one lives out there except the Captain. And the muscled work slave.

The slave, curled inside the barred cage, tried to sleep during that hot night. But despite the grueling first day of his ordeal, he could not. The slave shifted in the cage, his locked metal collar biting into his thick neck. The chains clinking, he reflected back over the last 20 hours.

The slave had started this trip like any other to a leather event; bag packed with harness and boots and sex toys, boarding the plane. First-class ticket to San Francisco. His rented car waiting at the curb, a sunny bright early summer day spent on the wide freeways heading south for his sexy weekend of leather play with a Master from the internet.

But something went wrong. The landscape began to change as he drove, no more suburbs and Starbucks, no shopping malls. No palm lined streets of coastal cities. The directions were sending him deeper into the agricultural fields away from the kinky vacation he imagined. When he arrived in the tiny farm town just off the freeway, he was already nervous but something deep inside stirred and his cock swelled as each dirty pickup truck passed by on the street. So the slave had waited, texting to his friends in New York, listening to music is his comfy rented SUV until he was startled by a knock on his window.

He had ignored the huge muddy Chevy truck that had pulled up next to him. Now a large strong man clad in a deep blue uniform, crisp long short sleeve shirt, shining badge and heavy black boots was looking in at him with an annoyed expression.

The slave had no time to react. The car door was open, the bag was over his head, the cuffs locked onto flailing arms, his head hitting the door on the way out, the phone crushed under the boot, his body thrown up into the truck bed, cuffs on ankles, a strap around the chest cinching arms close. The sound of the rental car door alarm still dinging as the truck started up and began to pull away. The slave’s mind had raced! My phone! My wallet! My stuff! What is going on?? It is being all left here open and available?! Is this some mistake?

An hour later, the truck finally slowed down, then stopped. He could hear military radios making muffled chatter over the rumble of the diesel engine.

The firefighter inside the truck was talking with the gate guards at the edge of a sprawling military base! Oh fuck! Now what?!? The slave steeled himself for the embarrassing reveal he was sure to come any second now!

But when the truck begin moving again, there was only the sound of the wind again.

The truck moved from pavement to dirt, dirt to rougher dirt, the slave’s body bounced and thumped in the bed, no way to protect himself. The sun was heating the heavy bag and making it hard to breathe and sweat dripped into the slave’s mouth and eyes, his arms totally numb. The only way in or out of the ranch was through the army base, like having a massive 24-hour guard force to keep the slave in his place!

The rest of that hot midday was a blur even now.

The sudden stop, the bag ripped away, the firefighter barking orders and grabbing the slave, cutting off his clothes with the big knife. The cuffed slave strung up spread eagle between to posts outdoors, the cold hose down, the inspection, the punches and flogging. And brutal first rape, worked over by the hairy muscled Captain who stripped down naked except his heavy black boots as he had become more aroused with each yell of pain from the slave and the massive load the slave gave up unwillingly at the Bear Trap.

Metal would like to thank to FirefighterSIR for this story, which is being re-posted to the Metalbond site as an encore. FirefighterSIR may be contacted on Recon 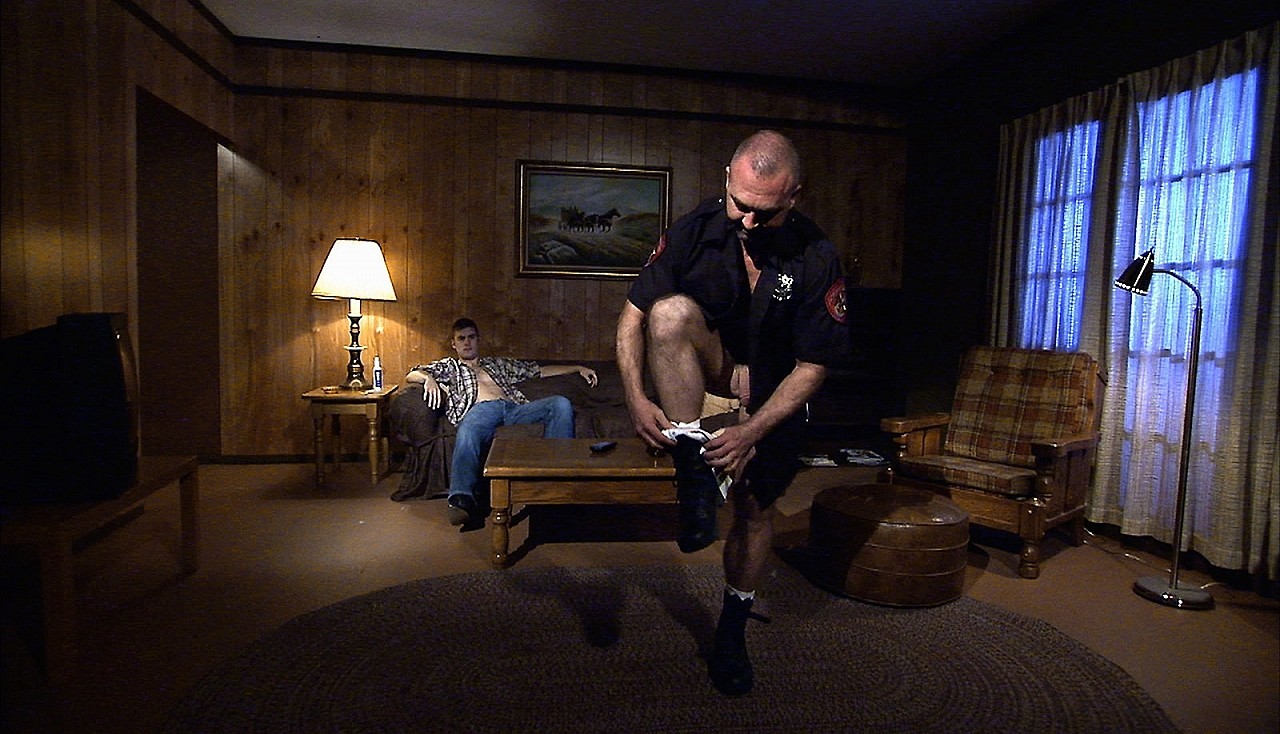