My new life which began so dramatically has settled into somewhat of a routine. I still work my usual time during the day after which I head for my new gym. Sir had me switch to his gym so on occasion we can work out. This has happened several times now, usually on his days off from the store. After my workout, I am not allowed to shower at the gym but I must pack my suit and shoes into my gym bag and head to my loft. Once I get to my loft I strip, throw my sweaty gym gear into the wash, hang up my suit and quickly buff and polish my dress shoes. Once this is done, I flush myself out till the water running from my ass is clear. Only then am I allowed to have a shower.

Afterward, I put on my heavy leather collar and lock it, then check my phone for a text from Sir. If Sir texts that means I am to put on a pair of spandex shorts and head for his loft. I let myself in and strip off my shorts and wait in the living room. Here in his loft and when I am in my own loft, I am not allowed to use the furniture with the exception of my bed. The furniture is reserved for Sir’s use. I relax and wait for his return home.

Today, after I finished showering, I checked and there was a text. I quickly pulled on my shorts, grabbed my keys and headed to his loft. I got ready and waited for him. He got home about an hour after me so I was waiting and anxious as always to see him. In the several weeks I had served him thus far, things were moving slowly and surely as Sir trained me and gave me guidance and orders to insure that I was being shaped into his boy. Today, he walked in and I could tell that he had not had a very good day. He appeared frustrated and angry so I waited for him to recognize me. He stomped in and tossed his keys on the table and stared at me. I was on my knees and sitting back on my heels, my head bowed and hands behind my back as required. He snarled and told me to get over and clean his boots. I crawled over and laid on the floor in front of him and licked and sucked on his combat boots till they gleamed.

He told me to get him a beer so I jumped to my feet and ran to the kitchen and grabbed a beer from the fridge, opened it and ran back to him handing it to him. He nodded and told me to go get my straitjacket from the closet. I turned and headed for the closet where he stored my jacket and other leather gear. I pulled out the heavy jacket and carried it back over to him. The padlocks as usual were hanging from the hasps of the buckles. He put his beer down and opened it and I slid into the jacket and he began to strap me in tight as usual. After I was strapped in and locked, he walked over to the closet and pulled out a heavy padded hood. He had only put a couple of hoods on me so far and usually they had open eyes and mouths.

He walked back over and quickly began to pull the hood over my head and then laced it up tight once the air holes were properly positioned so I could breathe. Then I felt a strap over my eyes being tightened, then one that went over my head and under my chin. Once those were snugged tight, he tucked the collar of the hood into my leather collar. He led me over and turned me around so I felt the brick wall on my ass and legs. I knew I was in the far corner of the loft then. He held me but forced me to kneel and then sit. I rested against the wall and waited in total silence and darkness. The leather of the hood scented the air I was breathing. All I could hear was my own breathing. He left me there.

Time passed and I nodded off and was having very vivid dreams and I was startled awake when He nudged my leg with the toe of his boot. I shook in fear as I was so isolated and controlled. I was scared but He stroked my leg and that helped calm me down. He loosened the straps and then I felt the hood losing its grip on my head and he pulled it off. He looked down at me and I was sniveling in fear. He knelt beside me and told me that I was a very brave and strong boy. I had been isolated for 4 hours. I nodded and thanked him for the experience. He helped me to my feet. He told me that he would feed me and then we would go to bed. I nodded and followed him stumbling a little. He put beef stew in a bowl and after I knelt beside his chair, he sat down and held the bowl so I could lick and suck up the warm stew. Once I had finished my stew, he wiped my face clean and told me to follow him to the bedroom area. I stood and followed.

Once there he unlocked the pinion straps on my arms and then undid the arm strap so I could pull my arms away from my torso and let them drop. He refastened the pinions on my biceps and then fastened the straps around my legs so my arms hung down but I could not do anything with them. The few times I had slept in the jacket, he had put me in this arm down position so I knew I could sleep that way. I turned and watched as he got ready for bed. While I had been stored away in isolation, he had changed out of his wescos, jeans and leather shirt. He had showered and put on sweats. Now he stripped and got into bed. I stood quietly and watched. He told me to get into bed and I turned around and sat down and then clumsily got into bed. He pulled me over and when he got me on my side, he came up behind me and I felt his cock press against my ass hole. I relaxed and it slid in and he held me close, buried in me.

The sun woke me up in the morning. I was surprised to find myself still wrapped in his arms and his cock was still in my ass. I lay quietly listening to his breathing and finally after a while he stirred and woke up. He shifted me over onto my stomach and lay on top of me and began to slowly fuck me. I moaned as he slowly fucked me and then he rammed his cock deep into me and I felt his hot cum fill my guts. He pulled out and got up and stumbled to the bathroom. I lay quietly as I heard him piss and then he came back and sat down on the bed beside me.

He slapped me on my ass and told me to stand up. I got out of the bed and felt his cum dripping down my leg while he unlocked and removed my jacket. I stretched and worked the stiffness out of my shoulders. He unlocked my heavy collar and removed it then slapped my ass again and told me to get into the shower. I ran for the shower and started it and then he got into the shower with me. He handed me the soap and told me to get busy. I nodded and began to rub and soap his body. Then I grabbed the shampoo and washed his heavy beard and then put in conditioner. He rinsed himself while I soaped up. He grabbed me and kissed me hard, forcing his tongue into my mouth. I moaned as he grabbed my balls and squeezed them while he did it.

He broke the kiss and said that it was time for breakfast. I grabbed a towel and dried him off and then toweled myself dry. He told me to put on my shorts and head to my loft and put on boots, jeans and a t-shirt then met him in the lobby. I smiled and ran for the front door of the loft and grabbed my shorts and pulled them on. I ran for the elevator.

I dressed quickly and headed for the lobby. I got there and he was waiting. He nodded and told me that I had kept him waiting so later it was punishment time. I was surprised as this was the first time he mentioned punishment. 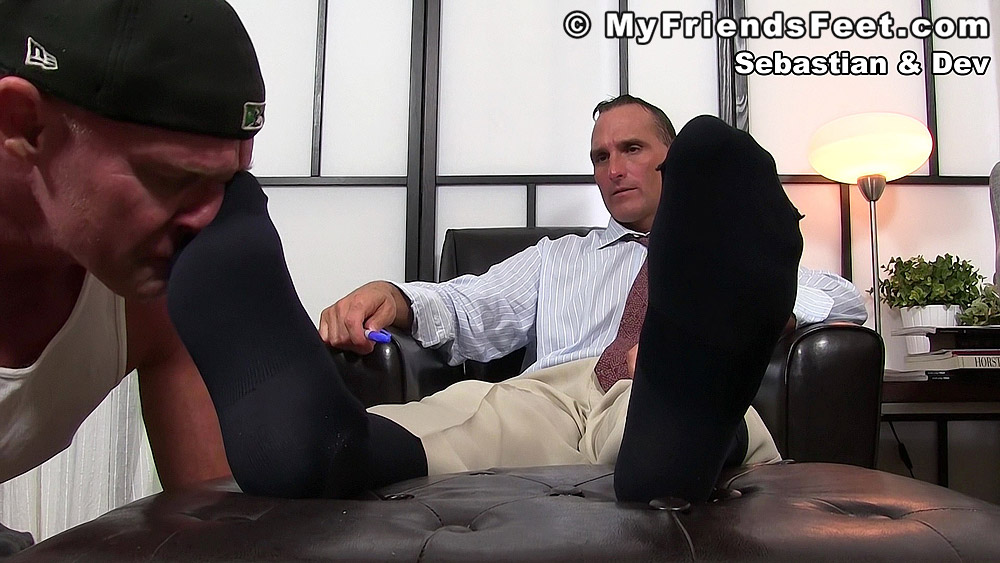