I woke up with a jolt. I’d sat leaning against the fuck bench looking at my new toy when I must have dropped off. For how long I didn’t know but I certainly had a stiff neck from the odd angle at which I was leaning and looking in front of me I soon had a stiff cock again too. There he was, sitting as best he could in the cage, which was about 4 feet square and 3 high. Not comfortable for that long apart from curling up in a foetal position. But he was there, staring out at me through the bars with his large blue eyes, still looking very apprehensive.

Right, I thought, let’s get on with this. I didn’t pay a small fortune to sit and look at him. Trouble was I felt I wanted to fuck him senseless and hold him tight to comfort him at the same time. Must get over this feeling! I got up, stretched my arms above my head and without being too obvious tried to show him the results of my extra work at the gym. Ok I wasn’t Schwarzenegger at his best but I could certainly handle anything this slave might throw at me. Not that I thought he would. Walking over to the cage, I remained silent, unlocked the door and opened it, indicating he should crawl forward. He remained on his hands and knees looking at the floor.

“It might not be original but from now on you’re gonna be Zero.” I liked that slave name since I read a story with it in some time before, anyway I could always change it if I wanted. He stayed silent. “Stand up, slave Zero.” I used what I thought was my authoritarian voice “And you have permission to reply to me.”

“Thank you, Sir,” he said, standing and putting his hands behind him. They obviously did a reasonable job at initial training at that place.

“You’re mine now to do with as I like. You do realise that don’t you?”

“I’m going to be a decent Master but I will do as I want and you have no say in the matter what so ever.”

So far so good. Now, I’m not an out and out sadist but nothing gets me hornier than watching clips of slaves getting flogged and fucked in those wank off movies. I’ve been to clubs where I’ve watched “demonstrations” and once or twice been able to “contribute” to the action, now it was on tap 24/7. I suddenly realised that I was stroking myself off slowly while all this was going on so, pulling myself together, I got hold of his collar and pulled him over to the bench.

“On the bench, face down, and keep still. Any other movement and you’ll get the electro ball killer you’ve got inside you as well as me angry. Now get!” He was like a lamb to the slaughter, immediately positioning himself exactly where I could attach the leather restraints on both wrists and ankles. I looked straight into his eyes while fastening the wrist buckles and clicking the small padlocks fitted to each one. He showed no emotion on his face but I could sense how tense he was from the way he held his muscles. I worked my way round him, straps at the forearms, pulling the waist belt over the small of his back and tugging it tight enough to make his breathing slightly laboured. Then the thighs and finally the ankles. This bench had the padded hole where I could fix his head in position by pulling a strap over his head. I decided to leave that till last. I grabbed a handful of his hair and forced his head up.

“Now to see what you’re made of.” I threaded the strap through the buckle and pulled, forcing his face into the gap, then taking a deep breath I decided which of the floggers to use on him. I chose a middleweight leather one, actually I only had three to choose from and thought the thin plaited one could wait till I was really in the mood whilst the rubber one didn’t appeal just now. Anyway leather always gets me feeling harder inside.

I took a swing. No sound came from him for at least five or six strokes, so I upped the speed and intensity, bringing the leather tails down right across his back as hard as I could. This got some reaction. First a sort of coughing gurgle as if he was trying hard to suppress it, then he really yelled. I was into 19 or 20 hard-as-I-could strokes, the welts were rising and small spots of red where the skin was abrading started to show, so I left his back and started on his ass. His sobbing started after half a dozen, mind you I think I caught his balls more than once, and not on purpose, but I wasn’t yet as proficient as I wanted to become.

Taking a short break to get my breath, my cock reminded me that it was straining to get some attention during all this, I’d got so hard it was beginning to hurt down there. I noticed the wet patch on the front of my boxers, still the only things I was wearing, and thought, “bugger it.” Whipping them off, I took one step between his restrained wide angled legs and simply plunged myself into him. God that felt so good, warm, firm, his ass seemed to suck me in and the sensation rippled through my groin down my legs and up into my gut. It was at this point I knew I’d spent wisely and the thought of the future with this slave spread out before me as wide as the grin on my face.

I didn’t last long. I had no self-control at this point. I pumped my spunk into him as hard as I could, making it last as long as I was able but after only 30 seconds or maybe a bit more I pulled out, mentally exhausted. Without thinking about the slave I walked away from the almost silent whimpering, up the stairs and into the bathroom for a long hot shower and a long think about what I was going to do next. I needed to incorporate a regime, for both of us. 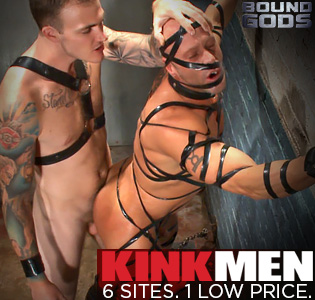