Well that was three weeks ago now, and I feel a bit of a failure. Yes he keeps the house clean, yes he cooks to a reasonable standard, yes he does everything I tell him to without question and yes he provides the best fuck I’ve ever had, but, and it’s a difficult but, I’m not seeing him as a slave so much as a houseboy or even – yep, I may as well say it, even a partner.

Don’t get me wrong. I’ve had my fair share of bondage buddies, fuck friends, one-offs and weekend s&m parties and enjoyed them all. I’ve had two reasonably long partnerships, the first lasting six years before work changed and he had to leave for the other side of the country, the second for just over two years before the relationship went stale. We were both more or less 50/50 and it never really went well. So I’m now in the dilemma of having blown a load of cash on a beautiful, sex-on-a-rope purchase but don’t feel quite fulfilled for the price. I had him naked when indoors but hadn’t yet decided on chastity.

I called Daz. He’s a really old buddy, probably the first mate I had who enjoyed the same pleasures as I did. We’ve tied flogged and fucked each other enough to know where all the limits and pleasure points are twenty times over, but he’s harder than me and knows how to get the best out of people.

“Zero, I have a friend coming over to stay for a few days. He’ll be here soon. I want you to show him in as soon as he arrives.”

“Yes, Sir. Would you like me to prepare coffee?”

“Get it ready but wait till I tell you.”

Couple of hours later the doorbell rang and Zero answered it. Daz stood there, all 6-foot-4 of him and as muscled as I remember although now he had grown stubble, which meant he looked even meaner than I remember.

“Shut it, slave!” was all I heard in reply as Daz swung his duffle into Zero’s midriff. “Drop that and see where it gets you,” he barked and walked purposely into the house.

He grinned as he saw me, and we hugged each other, both grinning and laughing. It’s been too long,” I said.

“Too right, Chris, about time I saw what you’ve been spending all your cash on too. Was that the little fucker who opened the door?” He knew perfectly well it was but still went through the motions.

“Coffee?” I said and we both sat down.

Zero brought in the tray and set it down.

Before I could say thank you Zero, yes another mistake I know, Daz barked, “where’s my duffle you little shit?”

Zero dropped his eyes and quickly went back to the hallway and collected the bag with all Daz’s gear. I could see it was heavy.

“Right, hold it up. Higher!” Zero lifted the bag in front of him, and I could see it was a bit of a strain to do so. “Don’t fuckin’ move.” Zero looked at me.

“As long as my guest is in this house you obey him in all things,” I said. “No questions.”

We continued to chat and Zero continued to hold up the bag, sweating a bit now and holding the bag close to his chest to get a bit more purchase on it. We got up and I took Daz up to my bedroom. “Fancy sharing?” I asked.

“But you have two bedrooms,” said Daz. “I’m happy to share of course, bit like old times, I presume the spare is a storage room or something?”

“Holy shit,” exploded Daz. “You bought a slave with more money than I earn in a year and you give him your spare bedroom? What the fuck are you thinking? Ok, ok, I’m not going to try running your life, but you asked for help here and it seems to me this is a good place to start. You got a playroom, yes? You got a cage, right? No need for a bloody bedroom. You wanted me to sort this for you, stand back and let it happen.”

I sat on the bed and Daz left the room. Several seconds later there was some raised voices, or in reality one raised voice, and some fast feet movements. I wanted to go down too but was unsure if watching someone else with my slave would make me look weak or on the other hand simply emphasise that what was happening was approved by me. I got up and went. I found them in the playroom dungeon. Zero was looking terrified, on his knees and with a handful of his hair in Daz’s fist. “This is where you stay, and in particular in there.” Daz was not only pointing Zero at the cage by roughly twisting his neck round but also gripping both his cheeks with his other hand as he did so. “See that, fucker? That’s your home unless otherwise told. You stay in there until ordered to leave for whatever duties you’re told to work on. Neither your Master nor I will lock the door, you will do that yourself, and you’ll keep the key, and you’ll unlock it when told to do so. DO YOU UNDERSTAND!” the last few words were shouted right into the slave’s screwed-up face.

“Mmnnth thherrr,” came the reply through a mouth squashed by a large fist.

“Now to see to your punishment. For taking advantage of your master for several weeks you’re gonna learn the hard way. Stand in the centre of the room and stand up straight.”

Zero moved quickly and without a murmur. “Hands behind your back, palms together!” The order couldn’t have been clearer. Daz lowered the winch until it was swinging gently, tapping Zero in the centre of his chest. The big man then went over to the bench I’d put at the side of the room and rummaged through the bits of kit I had there.

“Jeeez, Chris. It’s not exactly a branch of Fetters here is it? Just as well I brought some things with me.”

“You! Shit head,” he roared at the slave. “Get up those stairs and bring down my bag.”

Zero went to move but caught a glancing blow across his face instead, shoving him off balance.

“Did I hear a ‘Yes, Sir, thank you, Sir?’ Did I get any acknowledgement you heard me?”

“Well what are you bloody waiting for?”

I looked at Daz with what must have been a cross between uncertainty and awe. “Don’t worry, my friend, he’ll be fine, tender once I’ve finished with him, but fine.”

Zero reappeared with the duffle and held it out to Daz. Daz took it and, emptying it onto the bench, took out a couple of heavy metal wrist shackles and a hex key. With little or no ceremony he grabbed the slave’s wrists, held them palm-to-palm and fixed them together with the shackles. There was a single chain link between them. Next he took out a leather strap and looped it under the slave’s arms above the elbow and pulled until it was tight enough for Zero’s shoulders to be on fire and labouring his breath.

One move more and the chain link was attached to the winch which Daz put in motion, pulling the slave’s arms up. The higher they went the more he had to bend forward until the height of his wrists prevented him from bending further. Now the torture was entirely across his chest and through his shoulders. Daz fetched a single tail whip from his bag and the thin flogger from my pile, and looping them both round the slave’s neck he bent down, once again getting a fist full of blond hair and, pulling the slave’s face up as far as it could realistically go, very slowly and in a low voice told him that he would very soon get to know each of those items very, very well.”

He grinned at the now sweating face and dropped it.

“Right,” he turned to me. “Time to get ourselves a drink I think. Any good bars around here?” 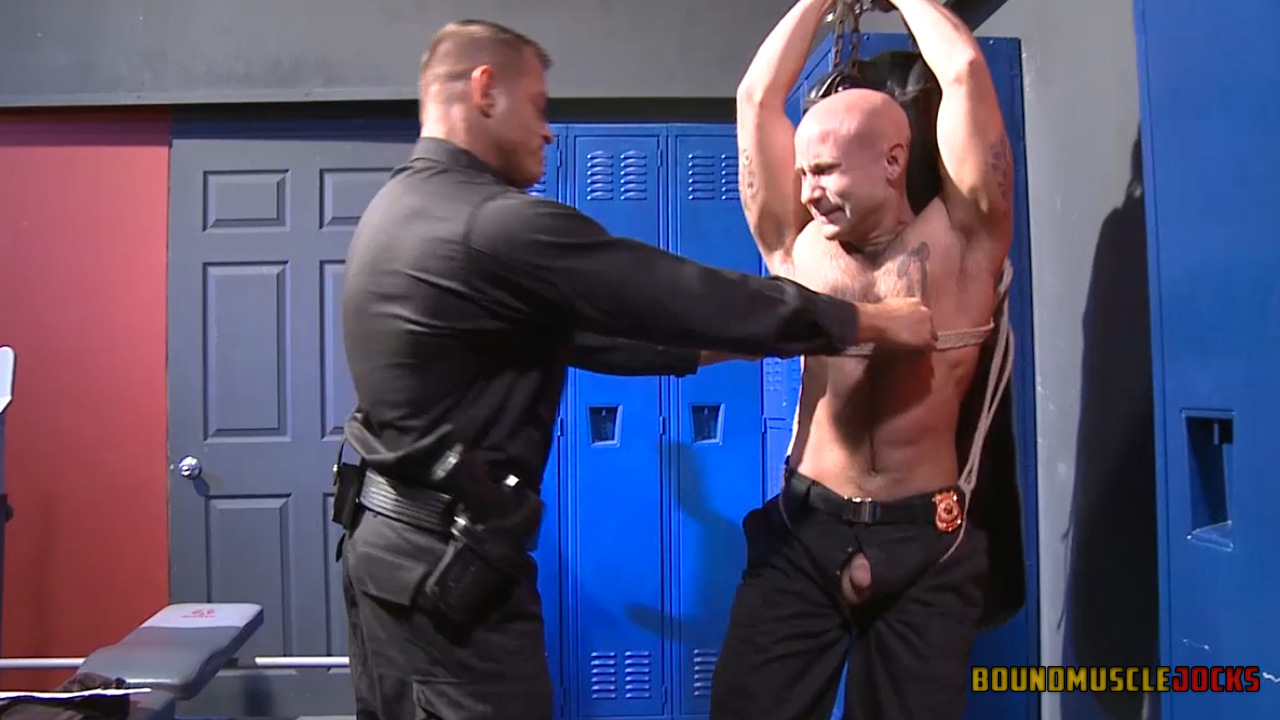