Note: This story originally appeared on the RubberZone site. It is reposted here with permission.

Matt had no idea how much time had passed when he felt his roommate unwrapping the rubber strips that held him mummified to the weight bench. His muscles ached and his head swam in confusion only made worse by the sensory deprivation caused by having every hole plugged and controlled. Matt was pulled off the bench and stripped of the rubber bondage surf suit, then led across the room and onto a platform that felt rubbery and spongy. It only took Matt a moment to realize that he was standing on his treadmill, but by then the rubber fist mitts on his wrists had been secured to the crossbar. Matt felt his roommate unstrap the gag stuffed in Matt’s mouth and pull it free, only to quickly replace it with a wide rubber tube gag through which Matt would be able to draw all the oxygen an exercising body could need. His roommate then inserted some kind of narrow tube deep into the gag and taped it in place, leaving the wide tube otherwise open. Moments later a drip of sweet liquid started through the tube. Matt recognized it as his favorite sports drink.

Suddenly the world shifted under his feet and Matt nearly fell to the floor, only to be steadied by his roommate as he clued into the situation. Matt started walking in time to the treadmill, slowly clearing the fogginess from his head. Over the next hour, his roommate slowly increased the speed of the treadmill until, soon, Matt was jogging at a good speed, breathing heavily through the wide piss gag while the sports drink trickled down his throat. Finally, after what seeming like hours, his roommate slowed the treadmill and eventually brought the exercise session to an end. Matt wheezed through the gag, relieved that the exercise was over, and then particularly relieved when he felt his catheter drained somewhere other than his mouth.

After a few more minutes to cool down, Matt’s roommate unclipped Matt’s bondage mitts from the crossbar and led Matt out of the spare room and back to the ensuite shower, where he again attached Matt’s mitts to the hook above the shower. Matt knew what was about to hit him before it happened, but he still screamed into the gag when the cold water doused his sweaty body. His roommate didn’t even seem concerned about soap. Matt didn’t realize it at the time, but his roommate didn’t care if Matt’s body was clean of sweat. Matt would be spending the night stewing in his sweat anyway. All his roommate was concerned about was bringing down Matt’s body temperature so that he could be safely packed away in tight rubber bondage for the night without overheating.

Finally the onslaught of frigid water came to an end and Matt was quickly dried with a towel by his roommate before being led back into his bedroom. Matt no longer had any sense of time. It could have been Sunday morning or Tuesday evening as far as he was concerned at this point, and for the first time since his roommate arrived, he wasn’t sure he cared. He’d been in bondage for longer than he had ever experienced in his entire life, even if every past experience was lumped together, and yet he still hadn’t come, making him hornier than he could ever remember being. By now, with the slew of recordings that wormed their way into his brain, Matt was well aware of the seriousness of his situation. But his hard dick didn’t care. Matt’s hard dick told Matt the truth – he was turned on, deeply, by everything he’d heard in those recordings, by everything that had happened to him in the past twenty-four hours. Only in his dreams had Matt ever previously experienced the feeling of having his body, every orifice, and even his mind, controlled, plugged, stuffed and transformed. Now, it seemed to be his roommate’s idea of daily life.

Matt’s stream of consciousness was broken as he felt his legs being guided into the feet of his sleepsack. He moaned at the mixed feelings that churned through both his mind and his cock, knowing that this would not be a short stint in bondage. His roommate pulled the sleepack up to Matt’s shoulders, then removed each bondage mitt one-by-one, inserting Matt’s hands into the internal sleeves. Then he reached under Matt’s crotch to make sure the electro-butt plug was still firmly in place, twisted it a few times for good measure, and zipped up the sleepsack to Matt’s neck.

Moments later Matt felt his roommate roll Matt’s rubber bound body sideways, struggle to position something in place, then roll Matt’s body back onto his back, and then repeat on the other side. It wasn’t until the zipper was pulled up Matt’s body that he realized that he had been placed in another sleepsack – his rubber sleepsack placed inside a heavy leather sleepsack. Matt pushed against the bondage of the double sleepsacks, relishing the heavy enclosure, but a quick jolt of electricity to his nuts and ass quickly reminded him that struggle was not acceptable. Matt lay still as his roommate laced the leather sleepsack tightly around Matt’s body and pulled the straps tight. Then Matt felt himself rolled onto his side again and rolled back, this time onto a low dolly.

Matt had no sense of direction as his roommate wheeled his motionless bound form out of the bedroom and a few feet down the hall, stopping just outside the bedroom door. His roommate lifted Matt’s worm-like form into standing position without any difficulty, then fiddled with straps on the shoulders of the sleepsack. Moments later Matt faintly heard a mechanical hum through the confines of the rubber hood and felt his body dragged backwards and then up off the ground, suspended from the ceiling by his shoulders. Matt swung lightly back and forth, finding that he had only had a couple inches at most on each side of his body before he touched soft padding.

After a few minutes of hanging in ignored silence, Matt felt the headphones placed back onto his head and then the catheter tube returned to the hole in his plug gag. He braced himself for the fullness of his bladder moving its way to his stomach and swallowed quickly when his roommate released the clamp. Then it hit him. He was hanging inside his linen closet in the hallway. Just a day ago it was a narrow closet with shelves and shelves of towels and sheets. Now it was a storage chamber, padded and secure. It was weeks before Matt actually saw the closet with his own eyes, but by then he had been able to figure out some of its features just from spending many nights suspended inside or strapped to the back wall. Although not even one square inch of his skin was actually exposed to the air in the closet, Matt could feel a cooling effect while hanging there, noticing later that his roommate had opened an air conditioning vent from the adjoining wall to keep fresh cool air moving into the chamber. He could also tell, from the limited movement he had in the cell, that all three walls and the door were heavily padded. And as Matt confirmed several weeks later, after a brief moment of sight, the walls and door of the storage chamber were covered by rubber sheeting over the thick padding. But what Matt never found out was that the cell also had a microphone embedded in the door, just in front of his face, recording his breathing, his moaning, and any noises indicating distress, and relaying those sounds to a speaker next to his bed – or at least, what used to be his bed.

Matt felt a change in pressure and realized that his roommate had closed the door to the closet. A loud click told him that a lock had been secured in place. And then, as he almost expected, the series of recordings he had heard over the previous twenty-four hours began to run through the headphones, but at a volume just barely detectable – the kind of volume that wouldn’t keep him awake, but would worm its way through his subconscious all night. Matt squirmed in his bondage, feeling the limits of the restraints, pushing his hard cock against the tight rubber, and sucking piss through the rubber plug in his mouth. A warm glow spread across his body and he found himself starting to fantasize about the challenges that might await him tomorrow.

Tomorrow? Shit! Monday. At least, if it was still Sunday, then tomorrow would be Monday. But whenever Monday came, Matt had to go to work. How could he go to work after hanging in rubber all night, after spending more than a day guzzling piss and cum, after having his head buzzed and his body shaved? Matt squirmed again in his bondage, this time searching for a means of escape or any sign that he hadn’t completely lost control of his life. But the bondage held firm – seemingly firmer than before – as Matt slowly realized that he had lost all control entirely.

This story originally appeared on the RubberZone site. It is re-posted here with permission. 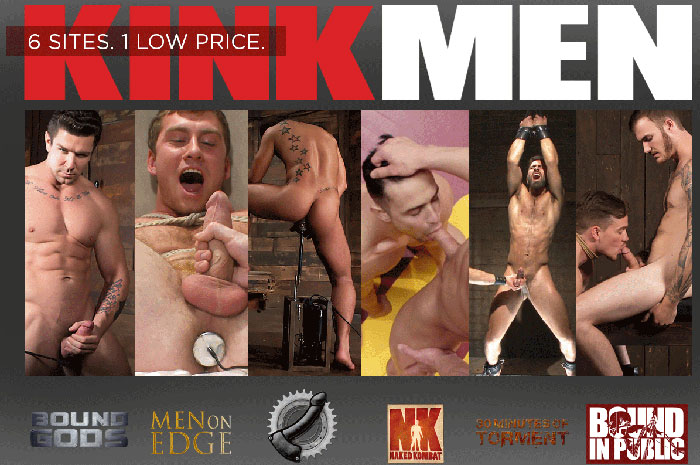