He sat there, although there was very little else he could do in the circumstances. Right wrist cuffed to right ankle, left wrist cuffed to left ankle and a short metal rod between his ankles which meant he could roll onto his side but that was about all. When his back ached too much he pulled his knees up to his chest, when his legs needed a stretch he straightened them again as much as he could. The cycle repeated itself in shorter and shorter spaces of time. He’d had his clothes on at first but they came after a while, cut and tore his shirt off, laughed as they pissed on him, pushed him over onto the wet concrete where the puddles accumulated and left.

He’d more or less dried off when they returned. This time they rolled him over and began to cut off his jeans. He’d protested at this only to hear one of them sigh. The same one, when the cutting and tearing had ended with him now only wearing his 16 hole boots, reached into his pocket and pulled out a small metal spring loaded clamp. They forced his mouth open and fixed this to the end of his tongue making his protests noisier but less coherent. The final addition was a thin chain, one end fixed to the clamp, the other to the centre of the ankle bar. This pulled on his tongue relentlessly unless he pulled his ankles tightly to his body but even then it wasn’t enough to get it back into his mouth. And of course it made his legs ache even more.

More laughter, more piss. “Want to steal from your Master again then slave?” the dark guy in full leather asked before slamming the door.

The cellar had no natural light and they had switched off the ceiling one so he was in complete darkness. He rolled onto his side, his drool sliding off his chest, where it had been landing for the last hour, and onto the floor to join the puddles of piss which were obstinately refusing to dry out. Time meant nothing. His whole face ached from that clamp on his tongue.

No. He didn’t think he’d steal from his Master again. That is, even if he still had a Master. 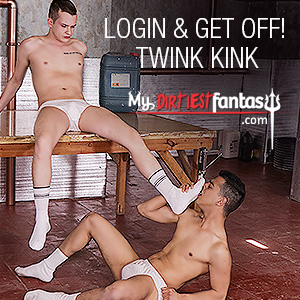