Number 502 headed towards the open wall of his cell and out into the corridor.

“Stay where you are, 502.  You’ll regret leaving your cell unescorted.”

He whipped around to see who spoke, but there was no one.  As the voice continued, however, he saw the speakers built into the ceiling.  He also noticed the cameras in each corner of the room, attached to the ceiling.

“Open the top drawer and put on the items inside.  Then read the documents on the desk.  Your orientation will begin in about an hour.”

Number 502 debated for a moment, and then turned to the set of drawers along the wall.  Stark naked in a strange building, he doubted that he would make much progress in terms of escape.  Disobedience didn’t seem like a good idea either, although he hadn’t opened the drawer or read the documents yet . . . .

The drawer contained a red Speedo and two sets of restraints.  He shrugged and put on the Speed, taking care to pull it gingerly over his pierced cock.  He examined the neoprene wrist and ankle restraints.  They were from Fort Troff and used Velcro and locking posts to hold them in place.  He hesitated before putting them on; he’d worn these before and knew that they were comfortable but secure and could be safely left on someone for a long period of time.  Shrugging again, he applied the restraints.  There were four open locks (but no keys) in the drawer as well.  He shook his head, pulled them out, threaded each through a post and snapped them shut.

After 502 was locked in the restraints, he let out an expletive.  He should have left the locks open, with the shackle just partially inserted! That would have given him a chance to get the restraints off later.  The reflex to close the locks had been automatic.

Moving to the desk, 502 found two pages laid out for him.  The first was instructions on how to care for his piercings and included timelines:  time before he should play with his cock or attempt sex; time expected for the piercing to be healed; and time when he could expect to have the ring in his glans changed to a larger one.

The second pages described the health precautions taken at “the Facility.”  (502 rolled his eyes.  How original.). Apparently “doc” had taken a blood sample and he was going to be screened for STIs.  He would find a bottle of Truvada that he should start taking immediately.  He learned he would be barred from any sexual activities for a week, by which time the test results would be completed and the Truvada would have kicked in.  After that, he would be expected to participate in unprotected sex “as required.”  The document assured him that all the staff and all the patrons of the Facility were screened for STIs.

There was a chair for the desk and 502 sat down immediately.  The thought of unprotected sex did not appeal to him.  He’d had the conversation with his doctor and knew, mentally, it was safe.  He had just always been cautious.

The words “as required” were also disturbing.  Okay, also arousing, but mostly disturbing.

To distract himself, he went to the sink and found the medication.  Hesitantly, he read the directions, opened the bottle, and, well, took his medicine.

Number 502 looked in the mirror.  He took in the image:  collar at the throat, restraints on the wrists, a barbell through each nipple, and the briefest view of the top of the Speedos.

He couldn’t believe he’d said that, not out loud, not under these circumstances.  This was all nonconsensual!   He shook his head and turned to look around the room again.  There was a clock on the wall, but he didn’t note the time when the voice spoke to him.  He didn’t know when this “orientation” would begin. After a moment, he went and lied on the bed to think.

He must have dozed, because he jerked up when he heard a tone coming through the speakers repeatedly.  After a few seconds, the screen on the TV came to life.  He saw the face of “doc” appear.

“Welcome to the Facility.  The purpose of this orientation is threefold:  to describe the Facility and its purpose; to introduce the manager, staff, and patrons of the Facility; and to discuss your role here.”

“The Facility is a number of buildings located in an extremely isolated part of the country.”

An aerial view of several buildings arranged in a compound appeared.  As the image encompassed more and more of the terrain and the buildings shrank, it was evident that there were no signs of other inhabitants nearby.

“There are four managers here.  You can refer to me as the Doctor.  Note that Doctor Who jokes are discouraged,” the Doctor said with a smile.  “I manage blood testing here, see to the medical needs of residents, and provide piercings and occasionally body modification.”  The image of Ryan Reynolds as Deadpool from the Wolverine film trilogy appeared.  “We haven’t sewn anyone’s mouth shut.  Yet.”

Number 502 saw the image faded and replaced with the face of a tanned man with buzz-cut hair wearing a khaki T-shirt and dog tags.

“This is Sarge.  He coordinates the activities here and frequently participates in them.  He also works with me to oversee the physical condition of the staff and slaves.”

The image faded and another image appeared.  The man wore glasses, had short brown hair and looked like, well a nerd.  “This is Charley.  He is a mechanical engineer.  He designs the specialized equipment and architecture we have here, keeps it maintained, and works with patrons to create new items that will meet their needs.  You will see and experience his many creations.”

The Doctor might have thing for Ryan Reynolds, 502 thought, as an image from Blade:  Trinity appeared.  Ah, yes.  A shirtless Ryan shackled to the floor.  The image was replaced with one that was similar almost identical.  It lingered long enough to see that the chained man was not Ryan Reynolds but was restrained in shackles identical to those from the film.

“Charley works with Mack, our other designer.  Mack works in leather, fabric and other materials to create whatever clothing or costumes our patrons request.  He and Mack also keep inventory on the collections here.”  Another movie image appeared:  Humungus from The Road Warrior.  This was replaced by a photograph of “Humungus” standing next to Mack.   The costume was identical to the original.  This “Humungus” certainly had the muscle (if not the height) to play the role.

“The number of staff is variable.  They each wear a leather wristband and name tag.  In some activities, they will not have a name tag but the wristband will always mark them as staff.  The staff have apps that allow them to track your whereabouts and tasers should they need them.”

“Our services do not come cheaply.  Our patrons are wealthy men with singular tastes.  We have high overhead and operating costs.  We depend on you to give our patrons utter satisfaction.  Always.

“We want you to learn from your mistakes.

“As far as escape, we encourage you to try.  The staff and patrons enjoy riding out, either on horse or on ATVs, to track and capture a runaway slave.  What follows is not enjoyable for the slave.”

“So, there is only one rule:  obey and satisfy.  Take it to heart.” 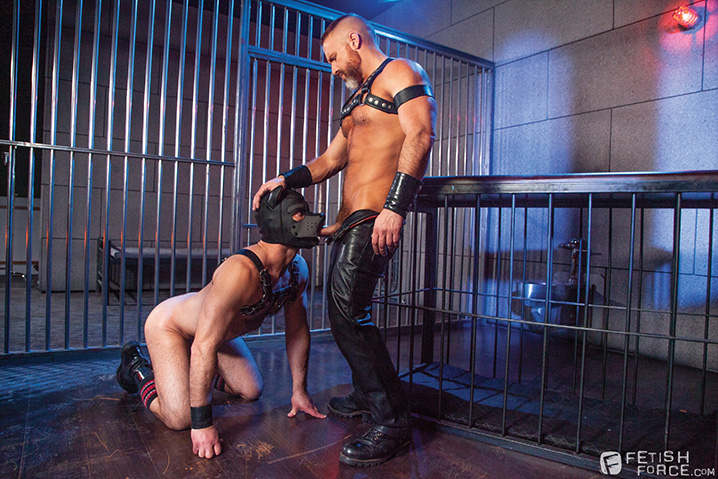