At 28 years old Jack was dissatisfied with his body despite spending as much time in the local gym as he could spare. True, he was 6 feet 3 inches tall with a 39-inch chest and 29-inch waist, but he was not getting anywhere as much sex as he wanted. For some reason, his Recon profile got hardly any response. But one morning as he was reading the very few messages that Recon had forwarded to him, a “ping” announced that someone had cruised him. He had a look and read the guy’s profile. It read:

The photographs were of a very gym-fit man, shirtless, his chest and arms replete with tattoos, wearing tight fitting shorts that accentuated his genital bulge. He looked as though he had last shaved his face and scalp a fortnight previously. His profile stated that he was 40-something years old. Other photographs were of a gym with free weights, chin bars and benches; they also showed heavy steel manacles and instruments of punishment, including whips, canes and paddles. The guy lived some 30 miles distant. That made a change: most of the men that interested Jack seemed to live on the other side of the country or even abroad. Intrigued, he sent him a message.

Jack had arranged to visit the guy the following Saturday. He had been instructed not to bring any gym clothing as he would be made to work out naked. Was sex also on offer? Jack wondered. He quite fancied the look of the man despite him being likely old enough to be his father.

That Saturday morning he put on a singlet and underpants then squeezed into his black leather motorbike race suit. He felt that slight tingle of excitement mixed with a little apprehension as he eased his Fireblade out onto the road. This was a feeling he always got when he set out to meet a sex experience for the first time; a feeling that he liked, causing his cock to harden, restrained as it was by his leather race suit.

Thirty or so minutes later he parked his bike on the man’s drive. He had also been given strict instructions to arrive at a certain time, a minute either way; not to arrive early and certainly not to arrive late.

Just as he stopped the engine the door opened and there stood the guy, dressed exactly as he appeared in his Recon photographs. ‘That’s what I like, punctuality, boy!’ He said as Jack climbed off his bike. ‘Get inside NOW and strip naked!’ he ordered. ‘Call me Sir! Understand, boy?’

Taken aback Jack answered ‘Y-yes Sir!’ As he entered the man’s house, removed his helmet, unzipped his race suit and removed his boots.

‘C’mon boy, everything off and stand to attention! I am going to inspect your body!’ The man barked. Jack did as he was told and stood before him, stark naked.

The guy felt Jack’s chest, lingering over his erect nipples then ran his hands up and down his impressive abdominal muscles. He then ordered Jack to turn round and roughly felt and pummelled his tight buttocks. ‘Legs apart!’ shouted the man. Jack obeyed, allowing his new Trainer to fondle his genitals, which caused his cock to become ramrod straight.

‘Keep to attention!’ Said the man, ‘I will be back in a minute!’

He returned with a stout elastic band in his hand. He tugged Jack’s scrotum and applied the band around its neck. He then slapped his now tightly restricted balls a few times causing him to grunt in pain.

‘I train men naked always,’ the man said, ‘I expect them to do as many exercises and repititions as I see fit. They very often need persuasion to complete the required number of reps, so I use either a cane, a whip or an electric cattle prod on their body if, as and when necessary. Do you have any questions, boy?’

They entered a large room further down the hall that probably once served as a dining room. The Trainer pointed to a chinning bar fixed to the wall. ‘Forty reps on that, boy,’ he said, ‘However first I need to shackle your ankles. I have found that my pupils somehow train better in the knowledge that they are effectively my prisoners. If you don’t want me to chain you, say so now then fuck off home!’

‘I am fine with that Sir!’ replied Jack.

The Trainer then attached steel shackles to Jack’s ankles, separated by about two feet of heavy chain. Pointing to the chinning bar he said, ‘Begin!’

Jumping up to the bar, some three feet above his head, Jack easily completed twenty or so reps, panting and sweating as he did so. ‘Good boy!’ Said the Trainer.

Jack just about managed the next ten reps, grunting in pain on completing the thirtieth.

Crack! He yelled as the Trainer delivered a cut with the cane across Jack’s bare buttocks.

‘Thirty one! Come on boy; you’re a fucking weakling’

Jack grunted as he completed the rep.

‘Uuuurgh! I can’t, Sir!’ The response was another stroke of the cane. ‘Please, sir! No more!’

‘Complete the set then the whipping will stop, boy. If you don’t wish to continue, say so, get dressed and piss off. If you do that, you won’t be coming back!’

Summoning all of his willpower and every last ounce of strength Jack completed the set of thirty repetitions. He let go of the bar and collapsed to the floor whimpering.

‘Rest now boy and have a drink.’ Said the Trainer, handing him a tumbler of water, ‘Fifty press-ups next!’ Jack gulped it down as the guy unshackled his ankles. He then produced a steel spreader bar about two feet long and shackled Jack’s ankles to either end.

‘Why have you used that Sir?’ he asked.

The Trainer said ‘Now we will make things a bit more interesting. I’ll say “Half,” and you will raise your body to a half way press up. I may then say “Rest,” which will require you to get into the horizontal position. Or I may say “Up,” meaning straightening your arms as normal.’ He laughed and continued, ‘The purpose of you being shackled in the spreader bar enables me to encourage you in your exercises by using an electric cattle prod on your exposed bollocks. here! Let me demonstrate!’ he walked over to the side of the room and fetched a long fork-like device with a stout handle and touched the two prongs against Jack’s scrotum, restrained as it was by the tight rubber band. He let out an agonised yell.

‘Right,’ continued the Trainer, ‘Thirty One!’

This continued with Jack starting to tire after about forty press-ups.

‘Forty One boy, now half!’ Jack struggled up from the horizontal position until his body was halfway with his arms partially bent. ‘Hold..’ continued Trainer, ‘Now Up!’ with a moan Jack forced his arms into a locked position. ‘Now half…’ He gasped as he lowered his body half way. ‘Rest…’ continued the Trainer. Jack collapsed to the floor, exhausted.

Snap! He yelled as a bolt of electricity surged through his testicles. ‘Up!’ shouted Trainer, mercilessly. Jack grunted as he struggled to lock his arms. ‘Half!’ His lean body was by now glistening with perspiration as he tried to bend his arms halfway. He failed and collapsed once again to the floor. Snap! he howled as his balls were shocked once again. ‘C’mon, you fucking weakling!’ Barked the Trainer, ‘Only six to go! Now Half!’ Jack used all of his willpower to obey, yelling as he did so. ‘Forty five, boy. Good! Now Up!’

Jack completed his workout after being shocked before each of his remaining six repetitions. Sobbing, he finally collapsed to the floor, drenched in sweat.

‘Well done, boy!’ Said the Trainer, ‘For payment for my services I want to fuck you!’ Jack was too exhausted to respond so the man continued ‘I’ll help you to your feet then I want you to stand facing about a yard from the wall with the palms of your hands on the wall. You will keep the spreader bar on so your arse is exposed. That is how I like to fuck men!’

With much assistance Jack shuffled as best he could in his leg irons as stood facing the wall as instructed. Trainer disappeared for a few seconds then returned, minus his shorts. He rolled a condom over his engorged penis then with two fingers applied lubricant up and around Jack’s anus. Holding him firmly by his hips he penetrated Jack in one single jerk. He thrusted in and out slowly at first, then faster, reaching round to fondle Jack’s well defined abdominals, allowing his hands to alternately roughly tweak his nipples then returning to his abs. Faster and faster the trainer fucked grunting as he did so, then slowed, relishing the long, very slow strokes of his penis up and down Jack’s insides. He continued his slow fucking for several minutes while continuing to very roughly fondle Jack’s abs and nipples. he then started to speed up, now grabbing Jack’s rock hard erection with his right hand and with his left, tugging on his testicles, still restricted by the tight elastic band. Jack howled in pleasure/pain/ecstasy.

Faster and faster the Trainer thrust his hips and harder and harder he violently wanked Jack’s cock. Harder and faster…..harder and faster until…both men orgasmed at the same time, with Jack sending a geyser of semen up and over the wall. The Trainer then tried to free himself from Jack’s anus but the latter’s sphincter muscle had tightened around the invading cock preventing extraction. ‘Let me go boy!’ He shouted.

‘I-I can’t Sir! That happens quite often with me’ replied Jack. ‘You’ll have to fuck me again Sir’

The Trainer didn’t have any choice. Once again he thrust his hips in and out; his penis by now rock hard once again forcing itself against Jack’s prostate. Again, he grabbed Jack’s penis and masturbated him as brutally as he could. Twenty minutes later he still had not orgasmed but Jack had done so twice more under the violent wanking he had to endure, with the Trainer offering his wet and sticky fingers up to Jack’s mouth. Eventually he came with a roar and in one aggressive pull, freed his penis from Jack’s sphincter. Both men now totally spent they collapsed to the floor and lay there for several minutes.

‘Ah boy, that was the best fuck I have had in ages!’ said the Trainer as he unshackled Jack’s ankles and removed the rubber band constricting his scrotum. ‘Do you want to continue with this type of training?’

‘Good boy! Next week I will expect you to complete fifty reps on the chinning bar; yes, that’s ten more than today. To make it more interesting I will hang weights from your balls and use a whip as a source of encouragement. Then sixty press-ups. After that you will complete forty sit-ups. l will use the electric prod turned to maximum voltage for both sets. Any questions?’

Jack dressed, squeezing his aching body into his leather race suit and mounted his motorbike. He could feel the tell-tale sign of an erection about to happen. This of course would guarantee a good wank once he returned home, in the thought of what he had just endured and in anticipation of what would happen on the following visit.

Thanks to Bikermike for this story! 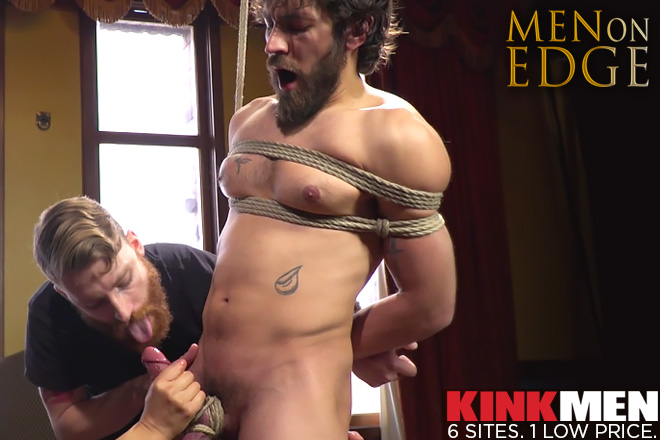 One thought on “Training”