Normally it’s a 12 hour drive from Kansas City to Atlanta, but I decided to stretch it out a little bit, and make my move into a bdsm-filled roadtrip. I had a couple weeks between finishing my old job and when I had to be moved in and ready to go in Atlanta for my new job, and I decided to use this opportunity to meet up with as many old kinky friends as I could along my journey. Over the course of two weeks I would get tied up by a number of old friends, spend a night in a cage, force men into submission, deliver a sub to his new dom, be put on display naked and defenseless, and spent many hours in inescapable bondage.

My first stop was a short drive from my old apartment. After packing my car and turning in my apartment keys, I drove a little over 20 minutes to my friend Riley’s apartment in the outskirts of Kansas City. I’d spent many nights and a weekends tied up at Riley’s while I’d been living in Kansas City, and I couldn’t think of a better place to start my kinky roadtrip.

I arrived at Riley’s and was greeted by a big bear hug and his smiling face. Riley invited me in, and we sat on his couch and talked for a little bit.

“So Derek, are you excited for you big move?” he asked.

“I am!” I said, “Definitely sad to leave everyone here, but it’ll be nice to be back home in Atlanta.”

“Oh for sure,” Riley said, “don’t worry too much about leaving man, you can always come visit.”

He reached over and grabbed my wrist.

“You better come visit” he made is voice playfully intimidating, “don’t make me come down to Georgia and bring you back on my terms.”

“Don’t threaten me with a good time Riley.” I smiled, and the two of us chatted for a while about fuck-all. Work stories, what shows we were watching, a new recipe Riley had tried out. Eventually conversation reached a natural pause, and Riley asked me if I was ready.

I pulled my shirt up over my head and tossed it onto the couch. Riley pulled up the collar he kept in a couch-side drawer and put it on me, locking it with a padlock as I pulled down my jeans and kicked my legs out of them. From the drawer Riley grabbed a few lengths of rope and gag. I opened my mouth to accept the dick-head shaped gag into my mouth. Riley pulled my hair to test how well the gag muffled my shriek, muttered “good” to himself, and then grabbed onto the metal ring on the front part of my collar.

Riley led me, gagged and collared, but otherwise unrestrained, to a chair in his kitchen. He sat me down in the chair and began securing me to it. He tied my wrists to the arm-rests on either side of the chair, tied my ankles to front posts, wrapped a length of rope around my torso to secure it to the back of the sturdy wooden chair, and tied a rope from the back of the chair up to a metal ring in the back of my collar, to keep me sitting up straight.

He walked around me, surveying his work, before pulling out his phone to take pictures of me tied to the chair, collared, gagged, and wearing only my underwear, which at this point was already feeling the strain of my hard dick.

“You know, I could just keep you here,” he walked slowly around the chair, “keep you around as my live-in sub. Use you as my toy whenever I want, and store you away when I don’t. Have your body all to myself!”

From behind me, Riley reached around and assaulted my armpits and sides. I trashed helplessly as he tickled me to the verge of tears, only stopping to grab and twist my nipples. I yelled into the gag.

“Too bad you’re too loud, even with the gag” he said, “Sooner or later the neighbors would probably call in a disturbance.”

He ruffled my hair, “and I guess I like having you as a friend or whatever.” He gave my hair a pull before walking away. He returned a few minutes later with nipple clamps, a wartentberg wheel, and a blindfold. He covered my eyes with the blindfold, put the clamps on my nipples and began running the wheel along my inner thigh.

Taking his time, Riley ran the wheel up one thigh and down the other, its spikes piercing through my briefs and into my skin below. Every minute or so he would tug the small chain that connected my nipple clamps, and I’d pull forward to stop the pain, only to be stopped by the rope pinning my back to the chair and the rope pulling on my collar.

Eventually, once he’d reduced me to a whimpering mess, Riley showed mercy on me and took off my nipple clamps. I took deep breaths trying to come down from the incredible rush. I heard the distinct sound of Riley putting lube on his hands, and felt a cold wet hand run up along the exposed skin of my inner thigh, before gliding under my briefs and wrapping around my already leaking cock.

Gently and slowly, Riley jacked me off, sliding his hand in long deliberate strokes. It didn’t take long before I was close, and I started thrusting as much as my binds would let me, only for Riley to let go of my dick and leave me so frustratingly on edge.

Riley left me there for a while, to calm down and enjoy being tied up. Eventually I heard him ruffling through some things down the hall in his room. A few moments later, I heard him walk down his hall, and felt him attach something to the front loop of my collar.

He took off my blindfold, and I saw where he’d padlocked a chain leash to my collar. He began untying me from the chair, starting with the rope around my stomach, followed by the one on the back loop of my collar, then untying my legs. He took the gag out of my mouth, and asked:

“You ready for me to fuck you?”

“Oh yes” I smiled, chewed air and moved my jaw around to ease a little bit of the soreness I had from the gag.

“Good” he said. He untied my hands, and led me with the leash to his room where he had four leather cuffs connected to the four posts of his bed.

I laid face down, stretching out my arms so he could lock me down spreadeagle. Once my arms were secured he pulled my underwear fully off (at this point it had fallen down to my ankles) and put his weight on my back. Straddling me, Riley started putting a leather head-harness on me, putting up the attached ball gag part to my face, which I bit into as he tightened the straps and secured it to my head.

“Good boy” he ran his hands through my hair before getting off my back and walking around the bed. He strapped my feet into the leather restraints, rendering me stretched out and fully helpless to be his hole.

I’d cleaned out in my apartment before heading over (quite a way to say goodbye to a place) so I was ready for Riley to fuck me. He ran a lubed-up hand down my back, and slowly slid his finger inside me, as I heard him jack himself off with his other hand. He pulled his finger out, and I felt the head of his cock push up against my hole. He left it there for a second, teasing me, before pushing it inside me. He was a perfect top for me –a skilled man with a smaller sized dick who could hit just the right spots.

He railed me until I was a weak and stammering mess. He started to breathe heavier and thrust faster, reaching and grabbing my hair as he got close. I moaned into the gag, drooling and clenching my teeth on the hard rubber. Riley started panting “oh fuck-yes-yes-fuck-yes” until I felt him shoot inside me. He stayed inside me for a minute, before sliding out and wiping himself off.

Riley walked around to the front of the bed, and kissed me on the cheek. He unlocked my hands and feet so I could stretch out my arms and legs. My foot had fallen asleep and I tried to shake it out, but before I could stand up, Riley laid down beside me and wrapped me in a big bear hug. We cuddled for a while, just resting, with my collar and head harness still locked on me. After about an hour my stomach made an embarrassingly loud noise. Riley laughed, unlocked my collar and took off my head harness. I pulled him in for a deep kiss.

He smiled and stood up.

“I’m gonna miss you Derek.” He tossed me a towel, “Go shower off I’m going to make us some dinner.”

The rest of the night was calm and relaxing. We ate dinner, chatted, watched some tv, and eventually fell asleep together. In the morning he made me breakfast and we talked about the future. I assured him I would come back to visit, and he told me I’d always have a place up in Kansas City if I needed one.

Having had the best possible send-off Missouri could give me, I got in my car to head off towards Iowa. A very out-of-the-way detour from my end goal, but the text message I got as I started my engine and plugged in the address to my gps reminded me why I was taking this long way to my new home.

I waved out the window to Riley, a great dom and an incredible friend, excited for whatever was in store for me in Iowa. 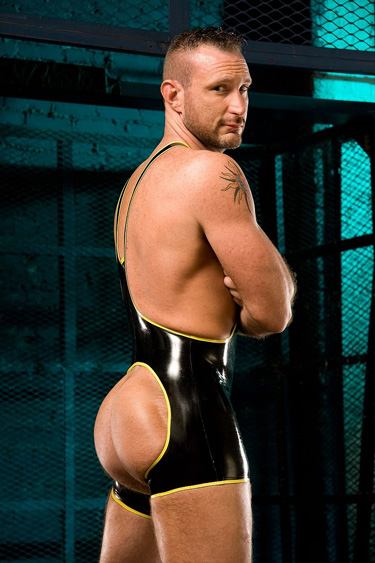