Note: This is a continuation of a story from a while back. To start at Part 1, click here.

The fireplace was roaring. Alex could feel the heat building up in his suit, the water sloshing about between his two rubber skins.

He knelt, gas masked forehead pressed to the stone floor.

“Have you thought about what I asked?”

His Master had arrived. Alex didn’t dare sit-up until told to do so.

“No Sir. Your boi doesn’t know what he needs. Please Sir, please decide for me.”

A rubber boot appeared in Alex’s vision. It was white and, as it was used to raise Alex’s chin, he followed it up. White boot, attached to a white suit.

His Master was wearing the same thing Alex was. Suit, boots, and backpack. His gas mask was different, with a single mirrored visor. And the gloves on his hands actually had individual fingers!

“You don’t know what you need,” he said and Alex nodded. “Good boi. You’re learning. It’s not your place to decide what your limits are. That’s for both of us to discover.”

Alex hopped to his feet, the water audibly sloshing and followed his Master. Outside the sun was already setting. Alex hadn’t realised how late in the day it was.

His Master opened the passenger door to his 4×4 and Alex climbed in without a word. The strap around the car seat was still there. He held up his hands as he was strapped in securely. A minute later they were driving, though not on the dirt track towards the main road but out across the fields.

“It’s time I lay out the rules for you boi. I’m a hunter. The stalk, the chase. It gets my blood pumping. It gets me hard,” he said, and he leaned over to tap Alex’s nuts through the suit. “The most beautiful game.”

As He said the words, Alex felt dread creep into his chest. He knew what was coming next. The 4×4 crashed through a forest, miles from the farmhouse now. They came to a stop in a clearing.

“The game is simple. You have to find your way back. To help you, that plug in your ass will pulse. The closer you are to the house, the stronger the shock. The last few miles will really test your desire to get back.”

Alex gulped nervously, his collar suddenly a notch too tight. How bad would the shocks be as he got near he thought? His Master got out, walking around to the passenger door and helping Alex out. As if reading his mind, the Master smiled beneath his mask. He grabbed the two loose tubes that dangled over Alex’s shoulders.

“To give you some motivation, this game has a time limit. In your backpack is enough air for eight hours. If you get back to the house in that time, the backpack will switch to an external feed. If you don’t get back in time…”

The tubes screwed into Alex’s gas mask and he felt it suck tight against his face. He panicked, mitted hands clawing at it until his Master flicked a switch on the backpack and he felt the cool wash of air.

“It’s a long walk boi,” his master said. “You have a thirty minute head start.”

Alex’s eyes were wild beneath his gas mask. His Master gave him one last tap on his nuts.

The forest was thick. Alex pushed through the bushes, the thickest thorns unable to make even a scratch against his suit. His mitts made climbing out of the streams a nightmare, but he fought like a wild animal.

Every now and then, the plug in his ass would buzz. He’d almost missed the first few zaps in his haste. But then they’d started getting stronger. He’d been half way down a slope when a jolt had caused him to lose his grip and tumble the rest of the way.

His cock had never been so hard though. At one point he thought he saw a light playing through the trees. Dropping to the ground, Alex could feel his dick pressing against his body in the rubber. He had had to stop himself humping the forest floor!

The gas mask limited his vision. The hood cut out sound. He pulled in every breath, acutely aware of his limited supply of oxygen.

Alex picked himself up and continued running. Forest, field, stream, he kept on going. Cycling had given him endurance, but the rubber sapped his energy quickly.

At some point it began to rain, a light trickle at first, then a heavy downpour. It took some of the heat from the suit and Alex stopped to recover. He sat back against a tree trunk, trying to get his breathing under control.

The rope came out of nowhere, thrown around his chest from behind so that he was tied to the tree.

A white figure emerged from behind him.

“You stick out like a white fox in a coal mine boi.”

His Master knelt on one knee before him. He pulled out a remote, and Alex saw the dial on it was set to five. Alex looked pleadingly into the mirrored visor of his Master but saw only his own reflection.

“Ahhh,” he shouted, pulling against the ropes.

The shock went on for what felt like forever. Tears collected within his gas mask.

And then there was only the sound of the rain. The rope was untied and Alex was pulled unceremoniously to his feet.

“Catch and release boi.” When Alex didn’t move, his Master pointed in the general direction of the house. “Run.”

Alex ran. He ran like his life depended on it. His cock bounced within the rubber, screaming for release while his ass screamed from the shocks.

He was captured three more times. Each time, the dial was cranked a notch higher. For number eight he was hogtied, left in a ditch for fifteen minutes as the plug worked up and down, rising and falling in its intensity. All the while, his Master watched, rubbing his white fingers over his own suit.

When he was released, Alex was determined not to be caught again.

He covered his suit in mud, hiding every bit of white he could. The farmhouse was in sight now, the powerful lights glaring against the night.

The plug was getting stronger, each jolt causing Alex to make a misstep. The air reaching his lungs had begun to feel thinner with each breath.

He pushed on, running low across the open field surrounding the farm.

A mile out and Alex was reduced to crawling. The shocks caused him to yelp. He dug his mitts into the dirt, pulling himself across the fields. The gas mask clicked with each breath.

He could see the fence now.

Dragging himself, his cock was excited by every rock and bump he shifted across.

He could make out the building. His objective only a hundred feet away.

The clicks in his gas mask had slowed down.

Alex clawed at the ground. The fence was right there and then…

His Master’s white boots, splattered with mud, stepped between him and the fence. Alex reached out, a mitt brushing at the mud on his Master’s foot. His Master knelt and lifted Alex’s head with one hand.

Alex collapsed in an exhausted heap as his Master lifted him from the ground and carried him inside, the last clicks of his gas mask echoing in his ears. 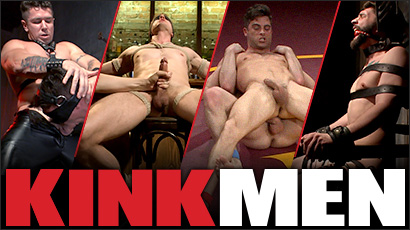